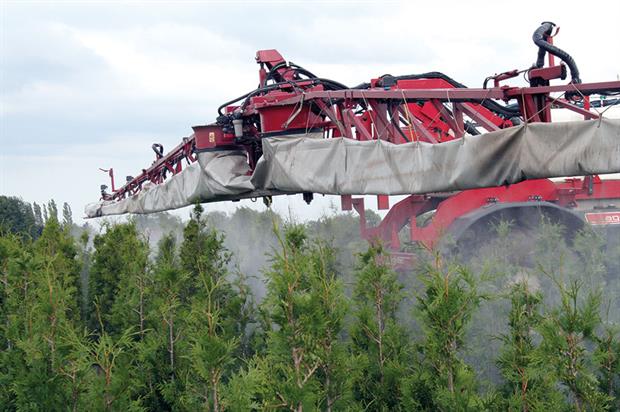 This is the first in a series of the best articles available on www.sprayers101.com, edited under agreement for FARMING FOR TOMORROW to provide special emphasis on Western Canadian agronomic conditions.

There’s been a lot of talk about rate control in spraying, and one key technology is pulse width modulated spray systems (PWM). Although PWM has been commercially available for a number of years, we are seeing new products enter the market. This article explains what PWM is and how to make it work in a spray operation.

All sprayers experience fluctuations in travel speed. Operators speed up or slow down as conditions demand. In order to maintain a constant application volume per acre, the spray liquid flow must change in direct proportion to travel speed. The sprayer achieves this with a rate controller.

Using a simple mathematical formula, the rate controller calculates what the required liquid flow needs to be for any given travel speed, and changes the flow by adjusting the pump pressure. The sprayer operator keeps an eye on the spray pressure to ensure it doesn’t exceed the capabilities of either the nozzle, the plumbing, or the pump or that it does not produce an undesirable droplet size or spray pattern.

Pulse Width Modulation utilizes conventional plumbing: a single boom line and a single nozzle at each location. Liquid flow rate through each nozzle is managed via an intermittent, brief shutoff of the nozzle by an electric solenoid that replaces the spring-loaded check valve. Typical systems pulse at 10 Hz (the solenoid shuts off the nozzle 10 times per second). The duration of the nozzle in the “on” position is called the duty cycle (DC) or pulse width. 100 per cent DC means the nozzle is fully on, and 20 per cent DC means the solenoid is open only 20 per cent of the time, resulting in the nozzle flowing at approximately 20 per cent of its capacity. The ability to control the duty cycle is referred to as pulse width modulation.

There are two chief features of a pressure-based approach that affect the spray operation.

In comparison, PWM systems do not rely on pressure to effect new flow rates. Instead, the duty cycle of the system affects nozzle throughput. Boom spray pressure stays constant throughout the duty cycle range, and as a result, so does spray quality and spray fan pattern angle. In practice, the lowest duty cycles increase droplet size, and reduce fan angle, somewhat. The operator also has the option of adjusting the spray pressure to get a desired droplet size, even “on the fly” and the PWM system will maintain the desired application rate.

A PWM system can therefore change travel speeds by about a factor of five (from 20 to 100 per cent DC). Duty cycles less than 20 per cent, although possible, are not recommended.

Note that the actual measured change in flow rate achieved by a PWM system is not directly related to duty cycle. The actual nozzle flow rate is greater than that predicted by a duty cycle calculation, especially for smaller nozzles.

Capstan: Capstan Ag Systems was first to offer a PWM system, the Capstan Synchro. The Capstan product was later licensed to Case IH sprayers and named AIM Command. It was a factory option on Case sprayers from 1998 to 2016, manufactured by Capstan. The system featured a separate monitor, permitted PWM to range from 100 down to 15 per cent, and featured an alternating pulse in which every second nozzle pulses identically, and alternating nozzles work in a 180 degree offset. In other words, in a system operating at 50 per cent DC, when any given nozzle is on, adjacent nozzles are off. This results in a “blended pulse” that minimizes the likelihood of skips.

In recent years, Capstan has entered the retrofit marketplace and the technology has been installed on many brands of sprayers at the dealer level. The hardware is identical to Case products, with some minor differences in how the software interacts with the rate controller.

Raven: In 2014, Raven introduced a system called the Hawkeye. The system uses an ISOBUS approach that works with the Viper 4 monitor. The electric solenoids are similar to those on the Capstan systems. The basic system (Hawkeye) features turn-compensation, but not individual nozzle sectional control. Section resolution is determined by the limits of the monitor, for example, 16 sections on the Raven Viper 4. Hawkeye 2.0 HD, announced December 2015, allows for individual nozzle on-off control. Hawkeye will be available as a factory option on New Holland, Apache, and Case sprayers starting in 2017.

John Deere: John Deere announced their PWM version on August 29, 2016. Called ExactApply, the system features 30 Hz PWM, individual nozzle control, automatic and manual nozzle switching, turn compensation, programmable rates by nozzle, nozzle plug detection, and LED lighting. It is expected to be competitively priced compared to the other systems, and offers higher maximum flow rates through its solenoid (up to 50 US gpa at 15 mph).

Two nozzles can be sprayed simultaneously at each nozzle location, and one or the other, or both, can be selected from the cab to extend flow rate ranges or to select a different spray quality. Units are expected to be tested on sprayers in 2017, and become available as a factory option or a retrofit in 2018.

TeeJet: TeeJet has a system called the DynaJet Flex 7120 that uses either a monitor or Android tablet to display pressure, duty cycle, and droplet size. DynaJet is available to OEMs and to the aftermarket. The unique aspect of the TeeJet system is the ability to dynamically select different droplet sizes, and the system will maintain that droplet size across a wide range of speeds or application rates. The TeeJet system is compatible with any flow-based rate control system, and does not require a TeeJet spray control. The product is available from TeeJet dealers.

Tom Wolf, Ph.D, P.Ag.
Tom Wolf grew up on a grain farm in southern Manitoba. He obtained his BSA and M.Sc. (Plant Science) at the University of Manitoba and his Ph.D. (Agronomy) at the Ohio State University. Tom was a research scientist with Agriculture & Agri-Food Canada for 17 years before forming AgriMetrix, an agricultural research company that he now operates in Saskatoon. He specializes in spray drift, pesticide efficacy, and sprayer tank cleanout, and conducts research and training on these topics throughout Canada. Tom sits on the Board of the Saskatchewan Soil Conservation Association, is an active member of the American Society of Agricultural and Biological Engineers and is a member and past president of the Canadian Weed Science Society. Twitter: @nozzle_guy