This year, I experimented with a quarter section of chickpea/flax intercrop. Unfortunately, with such a dry May and June in my region of southwest Saskatchewan, it’s difficult to come up with firm conclusions on the result.

I put the chickpeas through the fertilizer tubes of the air drill, while the flax went out the seed tubes and was placed shallower and to the side of the chickpeas.

The duo is helped by having sulfentrazone (Authority) registered for both chickpeas and flax to provide control of kochia and some other broadleaf weeds.

This year was so dry that disease wasn’t an issue in the chickpeas. Only one early fungicide application was made and even it may not have been necessary. Typically, I spray fungicide three times. That’s expensive. If the intercrop can cut even one application, that’s a significant saving.

Some intercrop experiments show an enhanced cumulative yield. My yield was poor, just like all the monoculture crops this year. The chickpea/flax intercrop yielded just a touch better than flax alone. Unfortunately, I didn’t have chickpeas seeded by themselves for comparison.

However, in a year when regrowth caused by late rains was a big issue, the intercrop came off amazingly early. Just after the large green lentils were harvested, we were able to grind through the intercrop before weeds and later germinating crop made combining impossible. Amazingly, the intercrop was harvested without any desiccation or pre-harvest aid.

It seems that where the flax didn’t all germinate, the chickpeas did and vice versa. Overall the field had maturity that was even enough to facilitate an early harvest.

Because of regrowth, the flax monocrop required a pre-harvest glyphosate application and wasn’t harvested until a month after the intercrop.

Although the quantity was low, the quality of both the chickpeas and the flax in the intercrop was very good. Both have been cleaned as seed for next year. Chickpeas alone may have benefited from the late rains and produced more flowers and pods, but maturity and quality may have been an issue.

I suspect that an intercrop performs best when moisture isn’t such a limiting factor. The South East Research Farm at Redvers, Sask. has been experimenting with chickpea/flax intercropping and there were also plots this year at the Indian Head Ag Research Farm. It’ll be interesting to see those results, particularly since they weren’t under a prolonged drought situation.

So, will I do an intercrop again? Probably, but I’ll have to choose the fields carefully. There’s no way to effectively control brassica weeds such as wild mustard. 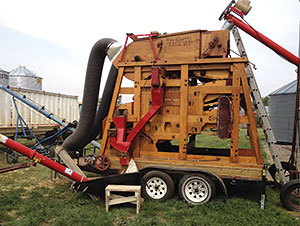 Separating the seed does require more work. In my case, I’ve set up an old Clipper cleaner on a trailer. A simple rotary cleaner would also do the job since the seed size is so dramatically different. I wanted a somewhat more sophisticated system so I could clean some of my own grain for seeding.

Combining might also create challenges some years. In our case, we combined on very hot, dry days, but if harvesting under cooler, damper conditions, there may be unthreshed flax bolls in the sample and a lot of them are about the same size as a chickpea seed, so they would be difficult to separate.

Some crops are complementary and there are advantages in growing them together. Peas and canola were grown together before herbicide-resistant canola was adopted. Lentils with condiment mustard are another interesting possibility. Overall, I think more research on intercropping is warranted.