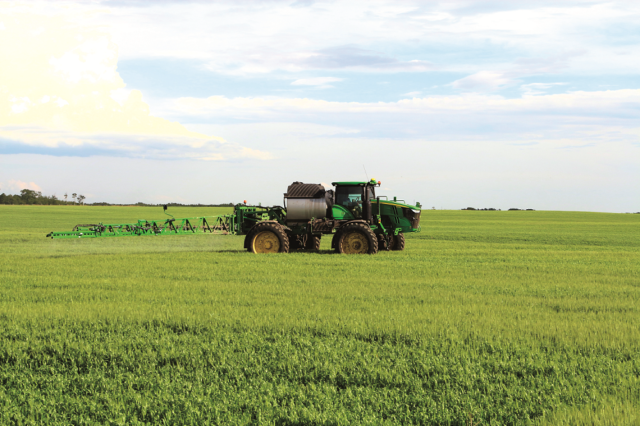 Pulse-width modulation (PWM) for rate control in spraying has been available in North America for about 20 years, primarily through Capstan Ag Systems (PinPoint) and more recently, Raven (Hawkeye). Case pioneered its widespread use through AIM Command, first with in partnership with Capstan, and more recently, with Raven. We’ve provided an overview of these systems in earlier editions of Farming For Tomorrow and on Sprayers101.com.

ExactApply is an application system capable of PWM, introduced by John Deere in August 2017, with its first customer field season in 2018. ExactApply offers several unique features that differentiate it from the existing systems. Following is a brief description of its major components and capabilities.

At this time, John Deere’s nozzles suited to the ExactApply’s pulsing mode are the LD, the LDX and the 3D. All three are similar in spray quality, obtaining medium to coarse sprays at 20 to 40 psi. These tips would need to be operated at those lower pressure for satisfactory drift management similar to that obtained with air-induced tips.

Proper sizing for PWM requires that tips be sized for about 20 to 40 per cent extra capacity. In other words, at expected average travel speeds, the pulsing duty cycle should be approximately 60 to 80 per cent. The following chart has a highlighted column at 70 per cent duty cycle for that reason. Assuming an ExactApply operator expects to apply five gpa and travel at 15 mph on average, possible nozzle options are:

<FIGURE 3 Caption: Calibration chart for PWM systems. Nozzles are sized at about 70 per cent duty cycle.>

The decision will likely be either of the first two options, as the third has a spray pressure that is clearly too low. The decision would depend on the spray quality obtained for each of the remaining two options.

Why 70 Per Cent Duty Cycle?

There are four main reasons a nozzle should be sized to run at approximately 70 per cent DC. The first is to provide speed flexibility. An operator may need to speed up somewhat, but usually not more than 30 per cent. On the other hand, slowing down is much more common to accommodate challenging terrain, and a factor of two to three is possible (from 70 per cent DC to 25 per cent DC).

Secondly, drift reduction through lower spray pressure usually requires less speed due to the associated lower flow rate. With some DC room to spare, the loss of flow can be corrected without requiring a speed change.

Thirdly, spot spraying at a slightly higher rate is possible, again through DC alone. Finally, turn compensation, during which the outside boom travels faster than the tractor unit and the inside boom slower, requires this additional capacity.

Auto mode allows for three flow rates to be used in succession: A, then B, then AB. The key to success is to use small size increments between A and B, and to use tips that have a wide pressure range. In the example below, the A location was a 02 tip and the B was a 03, for a total of 05. Pressure was not allowed to drop below 30 psi to retain good patterns. Pressure at switch over to the next largest flow rate therefore needed to be 90 psi to make the moves possible without pressure gaps resulting in over-application. As a result, the spray quality can be expected to fluctuate three times as the sprayer accelerates through A, B and AB in succession. Nozzle selection should seek to emphasize the middle of the pressure range of either B or AB to avoid unnecessary fluctuations.

ExactApply joins Capstan PinPoint, Raven Hawkeye and TeeJet DynaJet with PWM capable systems. Auto mode is a version of nozzle switching first introduced into the market as Arag Seletron and Hypro Duo React. It appears to be a full-featured system that is fully integrated into the new John Deere 4600 display but is also available on the older 2630. It’s expected that systems originating in Europe, notably by Rometron (WEED-it) and Agrifac (StrictSprayPlus), will enter the North American market in the near future.