Home Grain Handling In The Bin: Not a One-And-Done 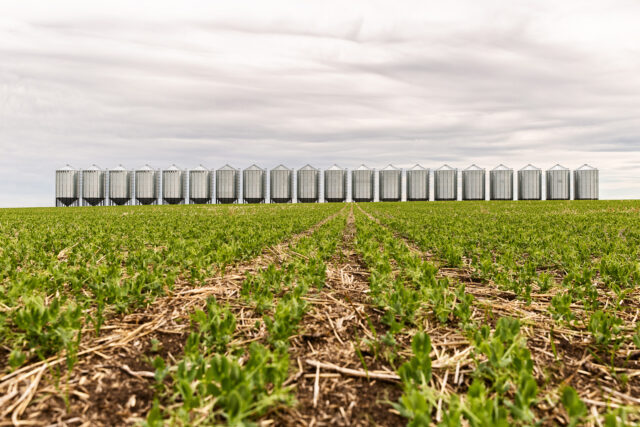 Losing wheat, canola and other crops in storage is a significant risk for farmers that can lead to dire financial consequences, particularly in years of poor harvest, say farming analysts. They recommend using tried and true methods to avoid spoilage while keeping an eye on emerging bin technologies.

To outsiders, storing crops might not register as a significant risk to farmers. If asked, most people working in agriculture could identify fluctuating commodity prices, weather, disease and safety as primary farming risks.

“Honestly, it’s a lack of time to really be able to focus on monitoring and management of in-bin conditions, making sure that you’re understanding that you need to manage temperature and moisture within the bin, otherwise things are at risk of spoilage,” says Joy Agnew, associate VP of applied research at Olds College, when asked about the main problem leading to storage losses. “All farmers understand that it’s a concern. The challenge is being able to prioritize the time during harvest and after harvest. There’s always this back of the mind mentality that, ‘once it’s in the bin, I’m done.’”

“Especially when you consider the cost associated with a spoiled bin of grain,” she adds. “Those sensors pay for themselves in a season if you’re thinking on that level.”

Free floating sensors could hold some benefit, says Agnew, although they’re not yet widely available. The benefits, if the technology proves cost effective, include higher resolution data compared to cable sensors which monitor a relatively small proportion of the grain. Other bin monitoring methods use micro-waves to penetrate bins and measure grain permittivity, producing 3D temperature and moisture maps from within a bin.

If a problem is detected, regardless of the technology, farmers must be able to move affected grain to a different bin, says Agnew. Aeration works well when the situation isn’t critical.

“But typically, if you’re noticing a spike in temperature based on sensors, you have a big problem in that bin already and blowing cold air through it is likely not to remedy it,” she says. “You have to break up that spot and move it. In a good growing and harvest season, nobody cares about in-bin management and methods to dry grain. But . . . when you have a couple or even one poor harvest, that information and knowledge and access to expertise and equipment is so critical.”

Jay Schultz grows hard red spring wheat, canola, yellow peas and barley on a medium-sized farm near Strathmore, Alta. He says his best advice for avoiding bin losses is, “You can’t manage what you don’t measure.” His operation uses 5,000- to- 10,000- bushel bins with aeration fans and moisture cables to prevent spoilage. Farmers, he explains, must keep good records and plan to cycle bins in late fall.

“Think of a bin like a very slow-moving fluid,” says Schultz, who studied crop science in university. “Temperature and moisture migrate, because of our winter, from the core down, then up around the sides to the peak. And then you’ll get grain bugs and they’ll actually heat up the grain more and they’ll start burrowing and it causes the grain to sprout. You can have high moisture and low temperature, or low moisture and high temperature. You can get away with that, but you can’t have both.”

“If you put it in at 30 degrees, if you pull that out in two weeks, it’ll probably be like 40 to 45 degrees,” he says. “Eventually it just gets so hot that it turns to gray ash. It’ll really wreck the sides of bins because it gets so hot. If you’re not careful with canola storage, you could lose that whole bin, whereas with wheat, typically you’re not going to lose a whole bin.”

Hot canola needs cooling. Without aeration, explains Schultz, farmers can remove bin contents and let them cool on a truck. He says he typically doesn’t ice down all of his bins.

“When November rolls around, you want to make sure all your grain is in good condition from harvest,” he says. “And, you can go and just turn aeration fans on or move your aeration fans around to bins you’re concerned about. When it is zero degrees out, you blow cold air on it to make sure there are no problems getting heat in the bin out.”

Angela Brackenreed, an agronomy specialist with the Canola Council of Canada, says the basic concepts of grain storage haven’t changed much over the years despite new technology and larger bins. As far as monitoring goes, she explains most farms use cable sensors that measure temperature and moisture. Certain brands transmit data to smartphones for added convenience.

“There’s no real solution for canola that has already deteriorated to the point of being considered heated, so we need to deal with it before that happens,” she says. “The first step to really breaking it up is pulling grain out of that bin.”

New bin monitoring technologies are available, but many are too expensive for average farmers, Brackenreed says. Currently, they’re feasible for large-scale commercial operations but over time they may become affordable for family farms. In the meantime, new visual technologies are being developed to give producers a cross-sectional, MRI view of what’s happening in a bin.

“Something that is accessible to some farms is automated fan control,” says Brackenreed. “It’s basically taking some of that guesswork away from the producer in when to turn fans on and off. It’ll turn on when environmental conditions are appropriate and turn off when they’re not.”

At the end of the day, sophisticated monitoring tools are supplemental. There’s no substitute for paying close attention to grain storage and monitoring.

“Some of this new technology really helps with that,” says Brackenreed. “If you want to go to your kid’s hockey game or something, these tools can be monitoring when you’re not there and they can send you a text message if something is going on. Or better yet, if you want to be sitting on a beach somewhere.”