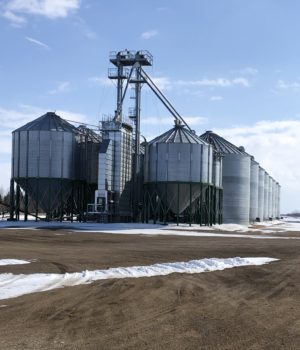 Some farmers in the Prairies have decided to build their own grain handling systems. These systems have come in handy in the past two years, when tough grain has become more common.

Ron Cloutier farms oilseeds and cereals with his father near Donnelly, Alta. He has a grain handling system with a dumping station and with wet bins that he can access when he comes into the yard.

“Those wet bins feed the grain dryer. From the grain dryer, I’ve got a discharge auger that supplies a bunch of bins. It’s nothing super complicated. I do have the ability to mix different moistures of crops,” he says.

Cloutier has three wet bins, and as the grain dries up during the day, he can change bins and blend. He purchased his dryer in 2018, and it’s big even in comparison to dryers at local elevators.

“I don’t have to wait for any kind of natural drying,” he says. As long as the combines can separate it, I can haul it into my yard and can handle extremely tough crops. That said, we have to be able to unload it. We draw the line when we have to start shoveling out trucks. Then we shut it down. We don’t push that hard.”

Cloutier said being able to manage the toughness of his grain, prevent spoilage and control his grain quality are a few of the perks of his setup.

“Some of the big operations now, they’ve got all these grain pumps and ability to recirculate. I do have the ability to recirculate if it gets too tough … with an auger,” he says. “I do have one grain leg that because of the dryer’s capacity, it’s a lot taller than what I had before. There’s no grain auger that could reach that now.”

Cloutier started farming with his father in 1998, and they’ve had grain dryers on their farm ever since.

Cloutier used to have a smaller dryer, but that system worked better when he was working with one combine. He now has two Class 9 and one Class 8 combine and is thinking about adding another combine if he gains a few more quarters. Currently, he’s very happy with the dryer he has now, and how it works with his combines.

“This dryer has the capability of following those machines,” he says. “I dried twice through the night, and I’ve never taken off tough crop like I did last year.”

The dryer can do about 3,000 bushels an hour, and its capacity has allowed Cloutier to sleep better at night.

“Most operations with smaller dryers have no choice. They need to run through the night when the combines are shut down. Because otherwise, the mountain of tough grain builds up,” he said.

If a farmer doesn’t have the storage or can’t get to their grain, the grain can start to heat up.

“In the morning, the first thing we do is fire it up,” he said. On a typical harvest day in the Peace Country, most people don’t start harvesting until around noon, so the dryer has lots of time to dry between 3,000 to 6,000 bushels.

“I get those three to four extra hours in the morning,” he said.

Another key piece of his grain handling setup that Cloutier enjoys is how it affords him the ability to work on his own schedule and not that of the elevator.

“This year, we didn’t move much until November,” he says. “Whenever a grain elevator can get me to haul, the guys in the driveway are always so thankful I’m hauling because I’ve got a few extra points and it gives them blending power. I tend to want to say that I get favoured a little bit more when it comes to contracts and grain deliveries.”

Long-term storage is another huge advantage. Cloutier doesn’t worry about spoiling. If he doesn’t like the price, he can just hang on until a better price comes along.

“At the end of the day, my product is extremely safe and it could stay there for two years if it had to.”

Cloutier said his dryer was a great investment and it’s been worth it financially because of money he has saved from spoilage and downgrading.

Les McGrath farms with his family near Humboldt, Sask., and grows canola, barley, wheat, flax and peas. He said he used to have a small grain dryer. But as acreage grew, the family decided they needed a larger grain handling system.

In 2011, the McGraths upgraded their setup.

“We looked at our farm and the size of our farm and our harvest ability and how many combines we had and how much grain we could harvest in a day,” he says. “At the end of the day, we decided we wanted a grain dryer that could keep our harvest flow operating. So, we chose the size of dryer we did. It’s not small and it wasn’t cheap. It’s a piece of machinery on our farm that gets used every harvest.”

His dryer dries 1,500 or 1,600 bushels of grain an hour in general. The dryer generally runs 24 hours a day. He has 16 bins that hold 40,000 bushels of grain each. The leg behind his dryer moves wet grain to the dryer and pushes dry grain out. Under one bin is a blowing system that does the rest.

The entire system is sized to handle the volume of grain that is being put through it. Pipes from the top of the leg can direct the grain into different bins. He can even load a Superbee in 15 minutes.

“I can just push a lever and change to different bins, so I don’t mix grain,” he says. “Every time you have to handle grain, it costs you time and money.

“It comes through the system, we auger it once and it’s then in a bin in storage after that. I can dry it, aerate it, but I don’t have to touch it myself.”

McGrath says it’s a system that he can use in many different ways with multiple crops, all at the same time.

“We try to equate it with the size to keep our harvest machinery moving,” he says about the handling system. “Two years ago, we dried 1.2 million bushels of grain, and I never dried in the winter time. This year, we dried 6,000 to 7,000 bushels. Three to four days after we were done combining, we were done drying.”

McGrath said his system, especially the dryer, has become a necessary tool on his farm and it’s allowed him to create his own schedule and not be as reliant on the local elevators.

“Every year, there are more and more guys doing the same thing we are,” he says. “We’ve had more guys come to our place and see how we have incorporated the wet storage and the dry storage into the grain handling system that we have on our farm. It’s less labour. It puts a flow to harvest because of the situation where the dryer is and where the storage is and how we can move grain out after that,’ he says.