Home Grain Handling Can you handle it? 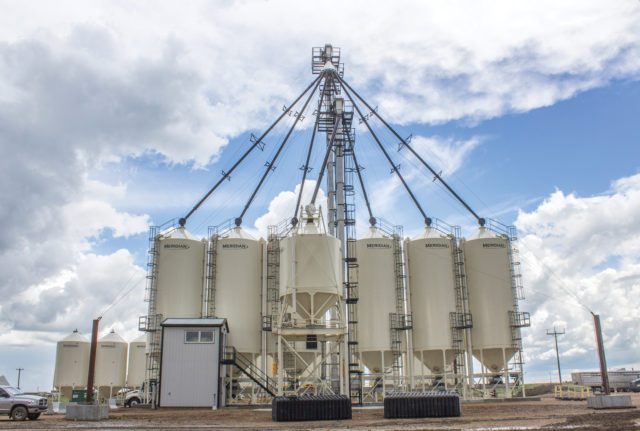 The locals call it ‘Dimterra.’

Standing sentinel at the edge of Highway 1 just outside Grenfell, Sask., Mark Dimler’s grain-handling system is easy to confuse with that of a larger outfit.

With 600,000 bushels of storage, an automated grain dryer that can run around the clock, an overhead bin with a 100-tonne scale, and a grain leg all looped together, ‘Dimterra’ rivals its namesake for bells and whistles.

“It looks like a terminal from the road and runs like one too,” says Dimler with a laugh. “We can load Super-Bees in about five minutes.”

But the Dimlers require a system of that size for their 30,000-acre grain farm. When you’re managing an operation that’s as big as the Dimlers’, every inch of storage space can mean the difference between success and a wreck during a tough fall.

“At harvest time, you need to get your crop off as soon as you can in the best condition possible,” says Dimler. “It doesn’t take much bad weather before you’re losing grain, weight, and quality.”

As farm footprints increase and margins get tighter, more Prairie farmers are looking at their own on-farm grain handling systems to reduce their time and labour at harvest.

“Farm sizes are getting bigger, and they can’t do it all on their own anymore,” says Jim Sawby, owner of Skyway Grain Systems in Airdrie, Alta.

“As farms get bigger, farmers really have no choice. It’s either spend it on labour or spend it on a handling system.”

And, in recent years, farmers have become even more focused on automation—developing systems with touch screens, sensors, and smartphone apps that can be operated anywhere around the world “with the push of a button.”

“Grain handling systems make it so that farmers don’t have to have so many hands moving augers and driving trucks around the yard,” says Sawby. “We’re displacing all that work and making it more convenient. It makes life easier.”

It makes farming faster too, he adds.

On Kevin Serfas’s 50,000-acre grain farm, time is of the essence during harvest, and his grain handling system helps him manage his logistics.

“You can have as many combines in the field as you want, but if you can’t physically get the grain off the trucks and get the trucks back to the field quickly, that causes real problems—your combines are basically parked,” says Serfas, who farms near Turin, Alta.

“You have to have reasonable facilities and the capability to keep combines moving.”

Serfas’s setup is “fairly traditional—it’s just the size that’s gotten so much bigger,” he says.

All of Serfas’s grain handling is centralized in an industrial park in a nearby town to make it more convenient. Most of the grain he stores goes into 1,000-tonne flat-bottomed bins on aeration, except his malt barley, which is loaded into big commodity sheds using 16-inch augers.

“The load-out of that flat-bottom commodity storage is done with a big payloader with a five-yard bucket on it. You can load a Super-Bee out in like 12 minutes.”

“They need the grain handling to keep up to harvest, not only for getting the truck unloaded quickly and back to the combine in time, but also to handle what you’ve got to do to that grain once you bring it into storage,” he says.

That’s a key reason Dimler has invested in such a large setup on his own farm.

This allows him to take his high-value crops—such as malt barley and canola—off a little early, without sacrificing yield or quality. In a typical year, Dimler might start combining his malt barley at 18 to 20 per cent moisture and then dry it slowly.

“That lets us get the barley off before it rains, and when you combine barley a little bit on the tough side, the heads aren’t breaking off on the ground, so you’re not losing near as much either,” he says.

That’s particularly important in a wet year, he added.

“One year in the area, there were frequent little showers at harvest time, and most people weren’t able to get malt grade for their barley,” says Dimler. “But we were able to combine it tough and get malt for it. In that particular year, that was a difference of over $1 a bushel.”

“With organic and higher-value crops, it’s that much more important that we have the ability to take the grain off before it’s rained on or snowed on and then get it into proper storage,” says Heide, who has transitioned about 75 per cent of his 46,000-acre farm to organic.

When Heide started out in 2014, he used grain bags to store his crops, but after back-to-back wet falls, he realized he needed to find a different storage solution—one that would allow him to aerate his grain if it came off tough. The final straw was a snowfall that buried his organic flax.

“When we finally had a chance to get into the field, we couldn’t wait until it was dry. We needed to go right away,” he says. “So we bought bins and a grain dryer, and that’s what saved us that year. We were able to take 14 per cent organic flax off and get it dried down.

“It’s a little bit of a security blanket for those what-if scenarios.”

Now, Heide has a series of large flat-bottomed bins ranging from 30,000 to 70,000 bushels of storage each, as well as supplementary hopper bins. The bins have electric unloads from the centre, as well as aeration.

And because Heide intercrops for improved soil fertility, he also has a grain cleaning setup that uses 16-inch augers and conveyers to feed the bins. The grain cleaner is fully automated—it calls for grain from each individual bin as it needs it, filling the hopper and engaging the auger system on the bin to bring it into the cleaner. The system then allows Heide to send the two crops in two different directions, usually into a large bin and a hopper bin.

All of this grain handling equipment has helped Heide manage his logistics as he expands his farm.

“I just don’t think you can farm without it, I think it’s a necessity,” he says, adding that he plans to add a leg, a pit, and a scale to his system. “Because of my system, I didn’t take losses in years that I might have if we hadn’t invested in storage and handling equipment.

“It doesn’t take too much loss to pay for bins that cost $2 a bushel, especially with our higher organic grain prices. It’s already paid us back.”