Home Grain Handling Movin’ On Up 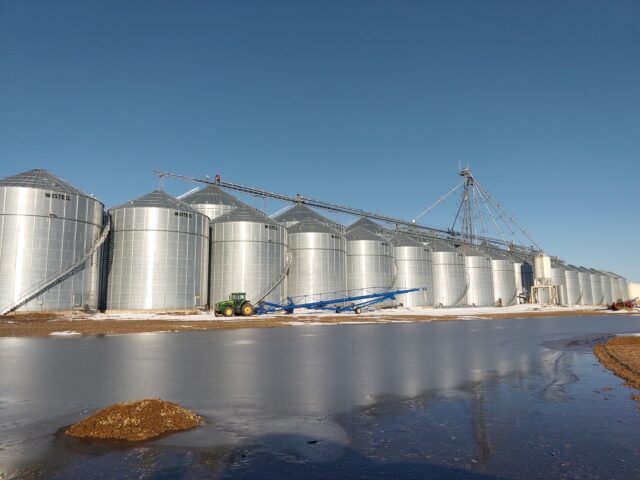 Nothing can replace the exact value of an on-farm grain storage and handling system. In a relatively short period of time, the technologies of dryers, unloaders and even grain bins themselves have come a long way to better serve farmers and their workers.

As yields and acreages of the average farm have increase, it’s essential that the tools used to move, process and hold all that grain be reliable, safe and efficient. Fortunately, the equipment industries have not only responded to that need, but continue to innovative and build on old systems.

Farming for Tomorrow spoke with two Saskatchewan farmers who recently invested in their grain systems to enhance their farms’ efficiency and productivity.

His story is relatable to many farmers. He started with a smaller dryer and storage system, grew significantly over the years and has had to update his grain handling and storage accordingly.

Cone’s first system was a 370-bushel dryer purchased in 2006, but it wasn’t long before he needed to upgrade. He added a pneumatic handling system in 2008, and two years later moved to a 510-bushel capacity dryer while expanding the handling yet again.

He says his two largest dryers, a Farm Fan and a GSI, are both made by AGCO as is the DMC pneumatic system.

“The larger dryer helps us out a lot in harvest with the ability to take grain at any moisture,” he says. “[We can] continue to harvest no matter what conditions we’re fighting.”

Twenty years ago, before he had his own dryer, Cone recalls how he relied on variation and supplemental heat, a real struggle given Western Canada’s temperatures as the days shorten during harvest.

It is also nice, he notes, to be able to go out and harvest when the crop is ready even when moisture levels aren’t ideal.

“We can still bring it in and dry it down,” he says. “That definitely helps us out a lot.”

This is especially true of growing malt barley, which Cone explains is very difficult to keep up to the quality.

“If it sits out there too long, you can lose your quality in a hurry,” he stresses. “A lot of years the price differential from malt to feed is substantial. You can have a fairly big revenue log if you end up with feed barley most years.”

On the horizon, he anticipates that they will continue to expand on their grain storage to keep up with their marketing plan.

Cone has 12 large bins that hold 73,000 bushels each, as well as several smaller ones. Currently, he has a 1.4-million-bushel capacity of on-farm storage.

“We’ve been adding bins over the years as we’ve required more storage,” he adds.

Investing in additional storage capabilities, he believes, is more efficient and economic than grain banks for his operation. Not to mention, snow and weather conditions can be a serious concern when trying to move grain long distances.

“You can never go wrong with grain bins,” he says. “In most operations, a good dryer and a good handling system can replace a combine or two because you can utilize your combine that much more.”

Over in Gerald, Sask., Dallas Norek and Clayton Lomenda are the third generation on their  family farm. In 1994, they incorporated to create Norenda Ag and have grown to more than 30,000 acres, seeding primarily wheat and canola.

With a growing farm, adequate bin storage became a challenge. The only solution was to build more bins. Wall Grain Handling Systems in Winnipeg, Man., provided the best option and a business relationship was forged. The first four 48-12 bins were built in 2006.

Norenda immediately put the bins to the test, by filling them with 70,000 plus bushels of malting barley at 25 per cent moisture. After turning it only once, they were able to market it as dry, a phenomenal feat that was aided by a perfect outside climate. Size, economy and aeration cemented the direction for the farm with the next several years spent expanding their bins and grain system.

“We realized then and there that we will never build anything but a full aeration, flat-bottom bin again,” says Norek, with the exception of their two 48-12s dedicated to fertilizer storage.

With several more additions, including a certified scale, load-out bin and automation, they have even been able to generate extra revenue by offering custom grain storage. Their largest bins, all of which are 78-18s, are capable of holding nearly 300,000 bushels. Total grain on-farm storage is nearly four million bushels.

Something that has been a major tool in managing this scale of grain has been the GrainX system: a state-of-the-art monitoring system provided by GrainX and Wall Grain. Norenda first installed GrainX in 2019 and has been using it ever since.

This setup detects the moisture, temperature and volume of each bin by a network of cables and submits them wirelessly to computers and mobile devices.

This has been extremely crucial when handling a touchy crop such as canola, Norek explains, which is 43 per cent oil, twice as high as that of soybeans. Damage to bins of their scale could mean millions in lost revenue, making all proactive and preventative maintenance measures a very big deal.

“You get a hot spot in the bin and within an hour you can go from 20 C to 40 C,” he says. “When you have the alarms and sensors with GrainX watching, it’s a peace of mind.”

A challenge that remains, however, even with a top-notch system, is the process of loading and handling that many thousands of bushels. Norek appreciates their original decision to keep all of their bins in a straight row with their biggest ones sitting closely parallel to their original smaller ones which keeps the grain leg more economical. The current system has an unloading rate of 11,000 bushels per hour.

“If we were to change anything, we would have increased the capacity of our leg,” he says. “Even with the 11,000 bushel per hour capacity, it still takes a good 15 minutes to unload a Super-B. We have plans to add a second grain leg to double capacity and reliability.”

Part of the struggle with this design was not knowing at the time of building exactly how big the expansion of their bin network would actually get. If they had any idea of the scope their operation would someday grow to, Norek says, they would have made some adjustments earlier on, such as building a pit unloading system that could move 25,000 bushels per hour instead.

In a similar way, he says having built greater capacity in their load-out bin would have been advantageous, as well. When you have eight to 10 Super-Bs arrive at once, Norek notes, all the precious minutes waiting for the overhead bin to reload add up quickly. To help with this, they supplement the system with pre-loaded grain carts to help fill the trucks on shipping day.

“As far as the physical structure of the bins, we’re thrilled,” he says, noting they have withstood the test of storing and sweeping out fertilizer without a problem.

Already, they are looking at prices and planning to continue adding on in the next few years.