Home Spraying 101 Are Spot Sprays The Future For Pesticides? 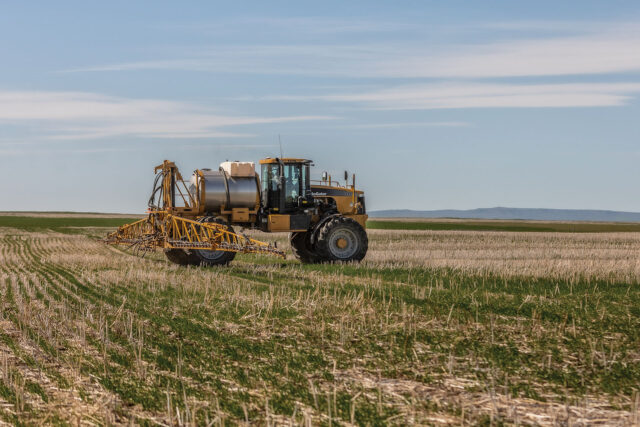 One of the fastest moving areas in farm technology is image-based sensing. Arguably, its most exciting implementation lies in spot spraying. A spot spray is similar to any other site-specific technology in its underlying principles: farmers apply the product only where needed, and only in the quantity needed.

However, the relatively slow movement of this concept into agriculture hasn’t been hindered by any argument with the principle, we’ve just had to wait for the technology to be developed. The rate of adoption of site-specific technologies has everything to do with the cost of the input and the ease with which its rate can be controlled. The technology has to be priced so that the savings it offers proves a good return on investment. And, even when conservation makes economic sense, it must also be easy. That’s why spot spraying is about to explode.

The basic hardware for spot sprays includes just four components. First is a boom fitted with individual nozzle shutoffs that can be turned on and off in a few milliseconds. Second, it requires a sensor that can determine the characteristics of the area ahead. Third, it requires an algorithm that can convert the sensed area into a decision. To do that, it needs the final component – a computer that can process the information to execute a decision fast enough to actuate the valves that turn on the necessary nozzles before they pass the weed in question.

All of these components are now available at a reasonable cost. This improved affordability was proven by a small team at the University of Sydney, Australia, who developed the Open Weed Locator (OWL). OWL is a spot sprayer farmers can build at home with commonly available components. The OWL website even provides a working algorithm, available for free at a GitHub site. People are 3D printing cases that house the required components to arrive at a professional-looking device.

The concept is not new. Early in my career I looked at a “Green on Brown” spot sprayer in Assiniboia, Sask., in 1991. Developed by Dr. Warwick Felton in Australia, it brought the concept of Normalized Difference Vegetation Index (NDVI) to spraying but had poor timing, coinciding with the rapid decline of glyphosate prices that removed much of the savings incentive. The same fate befell the next iteration of the technology, the WeedSeeker, developed by Patchen, later NTech Industries and eventually acquired by Trimble. WEED-IT is the current leader in this area, providing a highly efficient approach to the detection of very small weeds. Although successful in Australia where summer sprays and resistant weeds are important factors with economics strongly favouring the approach, Green on Brown spot sprays remain marginal in their adoption elsewhere. But the concept remains solid. Why spray an entire field if you can solely target weeds?

More recently, machine learning, such as that that powers the face recognition capability in photo software, is now applied to weeds within a crop, also called “Green on Green.” It involves a training set of images later applied to a testing set to determine the success of the training. One might show it, say, 100 pictures of pigweed for the training process and then test it with 100 different pictures of pigweed, asking the algorithm to determine if it’s pigweed. Eventually, after perhaps many thousands of images per species are run through, an algorithm with a certain success, or “hit” rate, emerges. If the hit rate can rival a broadcast treatment’s results, it’s a success.

There’s a lot of secrecy around the current capabilities of the leading contenders in this space. Can they see small weeds? Can they see weeds partially hidden by crop residue or by other weeds? Can they see misshapen weeds caused by an earlier implement wheel or insect feeding? Can they identify obscure, rare weeds? These questions make sense considering the need to achieve close to the 100 per cent control rate that has become the standard for broadcast sprays.

The initial appeal of spot sprays is to save product, with commensurate benefits in cost, logistics and environmental impact. But to see the real rationale for spot sprays requires revisiting Australia, where spot sprays initially took hold. In most regions of Australia, crops are grown during the winter which is cooler and rainier than their summer. After harvest, farmers practice summer spraying, akin to chem fallow. Owing to harsh growing conditions, species are often simply hard to control and genetic herbicide resistance is common. Spot sprays, by saving significant product volume, allow the re-investment of those savings into higher product rates or multiple effective modes of action tank mixes.

Similar forces are driving the early adoption of fledgling Green on Green technology in Australia. Troublesome wild radish has developed herbicide resistance and its removal requires an expensive herbicide. This weed can be removed economically with spot sprays, and French company Bilberry now offers a system for sale for this purpose. The camera and processor hardware can be purchased for about $150,000 AUS for a 36-metre (120-ft.) boom, comparable today to approximately $141,000 CAD. The algorithm for selecting wild radish costs an additional eight dollars per hectare. The deal allows the applicator to spray the same area as often as they wish in that year.

Multiple applications may be part of the initial rollout of the Bilberry. The company reports that its users are seeing a hit rate of about 80 to 90 per cent. If that’s not good enough, it’s feasible to achieve better hit rates with a repeat application. In theory, a farmer could remove 90 per cent of the plants with the first application, and another 90 per cent of the survivors with a subsequent application. Again, this notion is theoretical as the time between the two applications would need to be long enough, and the reasons for the original miss would need to have changed. But these ideas could feed the development of lighter, more nimble machines that cover ground at less cost.

Ultimately, spot sprays are not all about cost, they’re about the role of pesticides in agriculture. As herbicide resistance creeps upward, greater adoption of multiple effective mode of action tank mixes will be necessary to prolong the utility of herbicides.  The best hope for adopting this practice is to make it affordable through product use savings.

Other stewardship aspects can also be addressed by spot sprays. The use of crop desiccants and herbicides for pre-harvest weed control is being scrutinized due to reports of herbicide residues in some foods. If pre-harvest weed control or desiccation can be targeted solely to the green or weedy patches, overall residue levels can be reduced. Spot sprays may therefore prolong the use of this important practice.

Advances are happening quickly and producers will be able to evaluate results from large scale trials and early sales in 2022. Greeneye Technology has sold Green on Green units in Israel and the U.S., implementing a dual tank system that can broadcast a certain product and spot spray a different one. They are partnering with AGCO to bring products to market. EXEL Industries, parent company to the likes of Agrifac, Apache, Berthoud and Hardi, has formed its own Spot Spray division, Exxact Robotics. They are also moving quickly, and according to sources they are implementing a camera that not only sees the weed in RGB, but can also detect its hyperspectral signature for added discrimination. Bosch, having deployed significant resources into agriculture from their diesel divisions, is working with xarvio Digital Farming Solutions and several sprayer manufacturers to bring its SmartSprayer to market. In March, John Deere announced its See & Spray Ultimate, the fruition of their acquisition of Blue River Technologies. It features a dual tank and plumbing system that, like Greeneye’s, recognizes the importance of both broadcast soil-active herbicides and post-emergence spot sprays in modern resistance-delay tactics.

Product announcements continue. Precision Planting is venturing into spot sprays and Argentina’s DeepAgro is developing an aftermarket modular system that offers sensors, processors and solenoids to be fitted to any machine. But not everyone is placing sensors on spray booms. HARDI Australia has launched GeoSelect. The system uses drones to develop a Green on Brown prescription map. Regina’s Precision AI is also working on a system based on drones. Australia’s Single Ag has developed the drone-based SingleShot mapping system for Green on Brown. The drone map approach provides the ability to better estimate the product needed, and possibly to calculate the most efficient routes to cover the field in advance. The success of the operation can also be more quickly assessed by drone.

Although things are moving quickly, don’t expect an overnight revolution. Most companies are getting started in row crops first, minimizing the need to discriminate between weeds and crops. As capabilities build and products are refined, narrow-seeded crops will follow.

Spot sprays are built on lightning-fast solenoids and sophisticated proprietary algorithms, but their potential is intuitive. Observers immediately understand, and marvel at, spot sprays when they first see them. Beside their benefit to producers, they could be the most visceral of ambassadors for the new generation of sustainable farming practices.