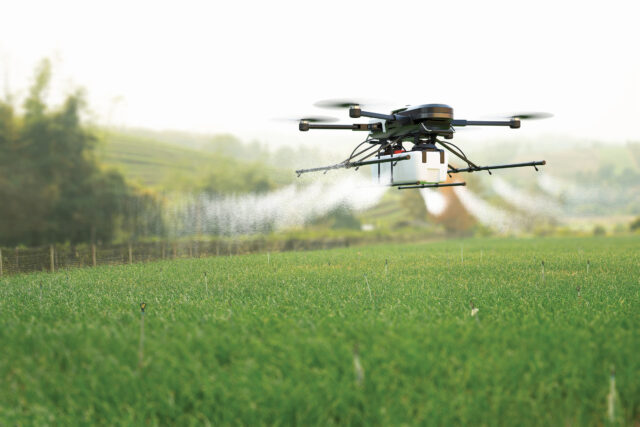 Remotely Piloted Aircraft Systems (RPAS), a.k.a drones, are receiving much attention as means to apply pesticides. They are relatively inexpensive, easy to operate, don’t leave tracks in the field and can reach difficult places with ease. RPAS have been used to apply pesticides in many parts of Asia for over a decade. It’s estimated 40,000 agricultural RPAS operated in China in 2020, where significant government subsidies for their purchase have been available to speed the transition. South Korea estimates 30 per cent of its arable area is treated with RPAS-deployed sprays. It’s a great leap forward for many farmers, replacing manual hand-held booms that were slow and posed exposure hazards to applicators. It’s been particularly helpful for aging farmers.

Here’s a look at the status of the situation in Canada and the United States.

In the U.S., spray application by RPAS does not currently require a specific label statement. In many states, RPAS application is grandfathered in as another form of aerial spraying. However, individual states have jurisdiction over the deployment of RPAS, and not all states allow them equally. Rantizo, a leading custom RPAS spray company, currently operates in 23 U.S. states.

In Canada, RPAS spraying is considered a new form of application. Product labels for its application are not yet approved by the Pest Management Regulatory Agency (PMRA). They have, however, issued several “Research Authorizations” permitting limited use of a pesticide for research purposes. Canadian provinces do not have the authority to overrule the PMRA, except to be more restrictive. The PMRA has determined that a proper risk assessment is necessary before a regulatory decision can be made. They have reason to believe that spray drift and efficacy in particular, but also possible operator exposure and plant residues, may be associated impacts. As such, they have requested experimental data to inform those decisions.

The availability of RPAS-specific labels for products is the prerogative of each registrant, the pesticide manufacturer or importer. If they believe it makes economic sense and are prepared to spend the resources to pursue a registration and service this new segment, then the process is set in motion.

We can expect a similar product availability for RPAS as we have for piloted aircraft. High-risk pesticides are less likely to receive RPAS labels, and someone planning to use RPAS exclusively on a farm, even in the distant future, will likely not have all products available for use with this application method. In the past 20 years, we’ve seen a reduction in the number of herbicide labels, and a growth of fungicide and insecticide labels registered for aerial application.

In both the U.S. and Canada, an operator must be licensed to fly an RPAS. Regulators have divided RPAS into two broad size classes. Those under 25-kilogram total weight can be operated with a Basic Certificate in Canada. Relatively easy to obtain, the basic license requires knowledge of flight regulations, airspace types, mission planning and the like, and can be issued by passing an online exam. The RPAS must also be registered and display its registration number on the fuselage. Those weighing 25-kilogram or more require an Advanced Certificate, a significantly more difficult task that includes greater knowledge of flight and possibly radio operations, as well as an on-site evaluation by a trained individual that observes one’s flight planning and execution. Since these RPAS can interfere with piloted flights in shared airspace and endanger bystanders, these certificates are essential to ensure operation is done by a competent individual.

In addition to operator licensing, the larger spray RPAS require a Special Flight Operations Certificate (SFOC) issued by Transport Canada. The SFOC application requires identifying the purpose of the mission and the areas of deployment. Approvals take weeks.

In the U.S., the rules have different names and their navigation is byzantine, but the end result is the same, pilots must be certified and authority to fly from federal agencies is necessary. This requires applying for both permissions and exemptions under laws originally intended for piloted aircraft.

From an applicator’s perspective, an RPAS differs from a ground sprayer in an important way. Nozzle size selection requires knowledge of the sprayer swath width.
A ground boom sprayer has a swath width defined by the physical width of the boom structure holding the nozzles at precise spacing. But for an RPAS, the swath width is the result of the variable spreading the initial spray cloud in the turbulent air under the aircraft.

A typical drone will have four, eight or even 12 individual nozzles They are usually placed close to the rotors, either as a single nozzle or in clusters of two or four. The downwash from the rotors spreads laterally while reaching the ground, carrying droplets with it, spreading them beyond their original width. Although there are some general rules for estimating swath width, it must be measured to be sure that overlap is correct.

To measure swath width, collectors such as water-sensitive paper (WSP) are placed at one-metre intervals perpendicular to the prevailing wind direction. The RPAS is operated directly into the wind using plain water in the tank and the spray deposits are collected by the WSP. A scanner is employed to estimate the quantity of spray deposit on the WSP. The spray pattern is plotted on a graph and will likely appear tapered towards the edges. The point where the deposit is approximately 50 per cent of the average is noted on each side of the pattern. The distance separating these points is the swath width.

As with all tests, this procedure should be repeated to ensure the results are similar and therefore reliable. Smaller droplets and higher flight heights will usually increase the swath width. In a sidewind, the spray will be displaced downwind prior to reaching the ground, and this should also be measured to eliminate surprises with the pattern.

Once a reliable value for the swath width is obtained, the possible travel speeds and water volumes are calculated for a specific nozzle size. In field operation, the RPAS control software requires entering the swath width and water volume. Using an internal flow sensor, it will then adjust the pressure, or PWM duty cycle, to achieve the required flow for the actual travel speed used.

The mission planning is nicely controlled through the RPAS software, allowing the field edges to be defined and the proposed passes to be displayed. Unfortunately, spray pressure is usually not reported to the pilot, leading some operators to mount a pressure gauge on the RPAS and obtain readout through an on-board camera. The lack of easy pressure readout is a pretty significant oversight, as spray pressure will determine droplet size which is imperative for swath width, droplet coverage and spray drift.

Actual features vary amongst RPAS manufacturers, but the spray mission is typically autonomous and the pilot may be needed at the controls simply for unforeseen situations. Nonetheless, Canadian law requires that Visual Line of Sight (VLOS) be maintained at all times, so it may be necessary to employ a spotter to assist the pilot.

Spray mix refills either involve adding mixed product directly to the tank, or for some smaller RPAS, swapping in pre-filled tanks. Batteries are swapped and a generator-driven charging station maintains adequate battery reserves requiring approximately eight-kW per 30-litre RPAS. The effort of tendering these application jobs is significant, particularly with a swarm operation, raising the question of staffing numbers.

The U.S. market has supported the establishment of dozens of custom RPAS applicator businesses. Some of these fly their RPAS in swarms – up to five RPAS can be legally flown in Canada under the control of one pilot – with surprising productivity. One such company uses three RPAS simultaneously, each with a 20-foot. swath width, for a total of 60-foot coverage while filling is staggered. Productivity of 50 acres per hour is possible for a fraction of the capital cost of a ground sprayer.

We can expect to see further evolution of laws surrounding RPAS spray application, particularly regarding the licensing of pilots. As RPAS spray application comes closer to reality in Canada, the knowledge requirements for this unique and primarily autonomous mode of flying will need to adapt and be simplified. Perhaps flying height limits can be employed, reducing danger in regulated airspace.

Pending the outcome of registration efforts which are in part contingent on drift and efficacy data, pesticide application by RPAS in Canada remains illegal as of 2022. If required, coarser spray requirements to mitigate drift will cause a ripple effect, needing commensurate higher water volumes to maintain adequate coverage. This in turn will hurt the productivity numbers and push the drive to larger drones.

Nonetheless, the rapid rate of change in this space will provide continuing improvements and new capabilities. The future looks interesting, indeed.