Home Those Wily Weeds Weed Control Ahead of the Combine 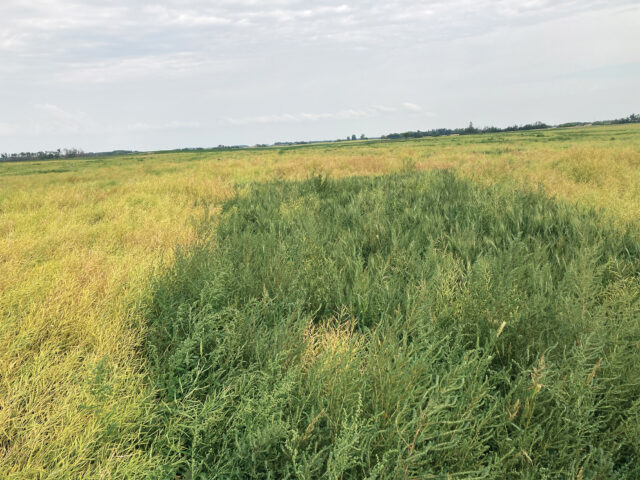 It happens every year for different reasons. Weed patches appear in fields late in the season, when crop staging means there are limited-to-no weed control options. Pre-harvest herbicide applications, swathing and patch management techniques are all options historically utilized for managing weeds at harvest. Depending on the weed spectrum, some options are better than others. If those weed patches are perennial weeds, a pre-harvest herbicide application has proven to be a highly effective management strategy. With annual weeds, it is typically too late to control them effectively. Instead, the strategy is to minimize the impact of those weed patches on harvest operations, as well as on future years of weed control.

One of the first considerations with picking a weed management tactic is to consider the biology of the weeds present. Certain weeds are known to reduce harvest efficiency, negatively impacting crop dry down and making it more challenging to feed the crop through the combine. In addition, weed seeds are often dispersed by the combine, spreading future weed problems and prolonging the issue by increasing the seedbank. Weed seeds similar in size to the crop being harvested will also downgrade the quality of the sample and in some situations are almost impossible to remove from the grain.

While stinkweed, shepherd’s purse and wild oats are generally not an impediment at harvest, three annual weeds that leap to mind as being problematic are kochia, cleavers and wild buckwheat. Kochia, the weed everyone loves to hate, is a challenge to kill at any time of the year. Its significant biomass often impedes straight-cutting crops and well documented herbicide resistance limits the effectiveness of pre-harvest herbicide applications. Cleavers may not have quite as much biomass as kochia, but the vines can easily overcome a crop and the seeds are a problematic contaminant, especially in canola. In addition, biotypes of cleavers have been confirmed as herbicide resistant to at least two herbicide groups. Finally, wild buckwheat is known to emerge throughout the growing season, with the tangly vines growing up to two meters in length, wrapping around headers and plugging straw choppers. While wild buckwheat is relatively sensitive to herbicides at early stages, it does have some tolerance to glyphosate which is increasingly evident when plants are larger.

Pre-harvest herbicides are often the first choice for minimizing weed issues, although we know kochia, cleavers and wild buckwheat can be resistant or tolerant of herbicides at that time of year. In addition to harvest efficiency, pre-harvest weed control is intended to ensure high quality grain and possibly reduce weed seed viability. In a study conducted for the Canola Council of Canada, Dr. Steve Shirtliffe with the University of Saskatchewan’s Department of Plant Science found that pre-harvest herbicide applications did not actually prevent weed seed set or reduce weed seed viability. This means that even though there might be dry-down of any susceptible weeds, there would still be spread of weed seeds by the combine. By contrast, desiccants that promote rapid dry down of plants may increase seed shed or seed drop, therefore helping minimize the spread of these problematic weeds throughout the field.

That aspect truly is one of the opportunities with these three weeds–there is not a lot of seed shed prior to harvest. In that same study, Shirtliffe noted that cleavers and wild buckwheat do not start losing seeds off the plant until 1,390 growing degree days (GDD), typically in late August. Kochia doesn’t start dropping seed until 1,585 GDD, typically well into September. That means there are ways to limit the seed spread and/or minimize the amount of seed present in harvested grain. One option is to swath or harvest those patches separately. Swathing aids in minimizing the amount of green material shoved through the combine, reducing the chances of staining seed or having green material heat in a grain bin and cause spoilage. Additionally, harvesting this patch separately means the plant’s seeds are not distributed throughout the rest of the field and managing small patches of weeds is typically easier than full fields.

The concept of selling the swather and switching to straight cutting crops leads to certain efficiencies, but does rely on uniform, weed free crops or managing weed patches to ensure harvest progresses smoothly. While a pre-harvest herbicide application may help with perennial weed problems, they are less effective in reducing future problems with annual weeds. Desiccants will not help with perennial weed control nor will they reduce seed viability. Rather than allowing the combine to spread weed seed farther across the field and expand problem areas of the field, patch management or swathing may be a more effective strategy. Or perhaps it’s time to consider harvest weed seed management, but that’s a topic for another day.