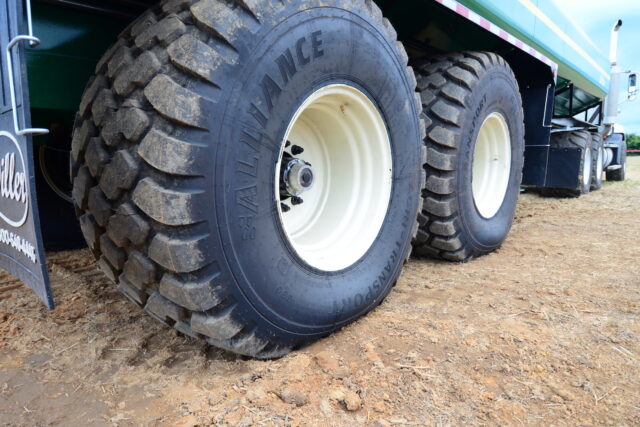 Rushing into the field to save a day can leave farmers with soil compaction that may reduce crop yields and increase fuel consumption for years to come.

According to extension educators at the University of Minnesota and North Dakota State University, corn and soybean yield loss from deep soil compaction ranged from nine to 55 per cent, with an average 21 per cent, in the first two years following the soil’s compaction. Fuel consumption for fieldwork rises in compacted soils, too. In a McGill University study, fuel consumption increased 35 per cent when tilling compacted soil. In Illinois, researchers found compacted soil required 10 to 16 times more energy for low-speed tillage and four to eight times that for high-speed tillage. When diesel prices are high, those differences can make an enormous difference to a farmer’s bottom line.

To make matters worse, even deep tillage cannot reach the compaction layers potentially caused by a pass with machinery that weighs 10 tons per axle. In reference, a 1,200-bushel grain cart can bear an axle load as high as 40 tons. And though Canadian farmers count on frost heaves to break up compacted soils, the effects of freezing soil only help loosen the top two to five inches, or five to 13 centimetres, of the soil.

The long-lasting impact of compaction across the Prairies illustrates this point. A study in Waseca, Minn., documented 13 years of yield effects due to soil compaction from a 20-ton axle load. Meanwhile, there are several considerations that when taken, can ease the impacts of compaction.

Soils near field capacity for moisture – when water fills the small pores between soil particles and peds while larger pores are filled with air – are at maximum risk for compaction from equipment traffic. In this condition, the water between the particles lubricates the soil so it can slide when pushed down. Meanwhile, the air-filled macropores collapse under the weight of machinery.

The impact happens quickly. Marla Riekman, soil management specialist for Manitoba Agriculture, points out that 80 per cent of soil compaction happens in the first pass. So, the moment a farmer rolls out onto the field, compaction is underway. The compaction that results can create a barrier to roots, water infiltration and the movement of nutrients and gases. In a wet year, compacted soils are more easily waterlogged, which increases denitrification and enhances conditions that allow root disease pathogens to thrive. Wherever possible, stay out of fields when they are most susceptible to soil compaction.

When moving grain off the field, Reikman recommends following existing tracks across the soil. Since the vast majority of soil compaction occurs the first time a machine crosses the space, it’s wise to concentrate traffic on already compromised areas. Shortcuts and diagonal paths only further compact the field.

Shortcuts cause long-lasting problems that are compounded by inconsistent wheel spacing and add up quickly. Researchers at North Carolina State University monitored vehicle movements in three cropping systems and found that 45 to 85 per cent of each field’s entire surface area was touched by tire traffic during a single season.

Regardless of soil conditions, tires can be the most efficient and cost-effective tools to minimize soil compaction. Barrie Taylor, regional sales manager for Yokohama Off-Highway Tires America Inc. in Saskatoon, Sask., points out that inflation pressure directly corresponds, within a couple of psi, with compaction pressure.

“Reducing tire inflation pressure reduces compaction force, plain and simple,” says Taylor. “Every tire manufacturer has inflation tables that make it easy to determine the lowest inflation pressure for safely operating at the load and speed you will be running.”

He further explains that when a tire is properly inflated, its footprint is maximized. Therefore, the load is spread over the largest area while wear and downward force is at its most even level. Rolling resistance and slip are also at their minimum and heat buildup is reduced. “A properly inflated tire will not only cause the least compaction, it will operate at its highest efficiency and last its longest,” says Taylor.

Overinflation creates a compaction hotspot in the centre of the tread, Taylor notes, adding, “That hotspot is also where an overinflated tire will wear the fastest.” Meanwhile, underinflated tires are prone to excessive sidewall movement and the buildup of heat which can destroy the tire.

Over the past decade, tire makers, including Yokohama Off-Highway Tires, have introduced increased flexion (IF) and very-high flexion (VF) tires that operate at dramatically lower inflation pressure than conventional radials of the same size. Thanks to special sidewall technology and modified construction of the areas around the tires’ bead bundles, IF tires can carry the same load as a conventional radial at 20 per cent lower inflation pressure, or a 20 per cent heavier load, at the same pressure as the regular radials. For VF tires, the inflation reduction or load increase grows to 40 per cent.

“IF and VF tire technology allows farmers to dramatically reduce their compaction and improve the performance of their equipment,” says Taylor. “VF technology has been a very high priority for us in our Alliance brand of farm tires. We have developed VF tires in R-1 and R-1W patterns for tractors, combines and other equipment, as well as VF flotation tires and implement tires.

“Our commitment through our Whole Farm concept is that we can provide low-compaction options for nearly any wheel position on the farm, because we know soil compaction isn’t just caused by harvest machinery or big tractors,” adds Taylor. “It is a constant challenge every time a machine rolls out onto the field.”