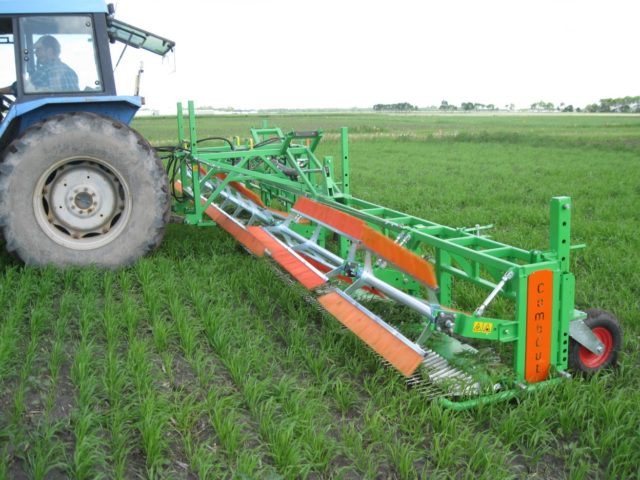 According to crop protection industry experts, the arrival of a new herbicide mechanism of action (MOA) within the next 15 years is unlikely. Similarly, a report commissioned by CropLife indicates that it now takes over 10 years to bring a new herbicide product to market.

However, this does not mean that new weed management solutions aren’t on the horizon. Research on the use of mechanical weed control on the Prairies is thriving, driven by demand in organic production, increasing herbicide-resistant weed populations, and the need for more weed management tools in special crops like hemp, sunflowers and pulses.

Research from the University of Saskatchewan has determined that pulse crop producers can achieve weed control similar to hand weeding or using herbicide by using a combination of a rotary hoe or tine harrows and inter-row cultivation. When used individually, each piece of equipment contributed to weed biomass reduction, with the rotary hoe generally giving the best weed control and inter-row tillage giving the least. However, weed control – and crop yield – were maximized when an early pass with the rotary hoe or harrows was followed with inter-row cultivation (Table 1). This highlights the importance of early weed control and of managing weeds both within and between crop rows.

Although not included in this study, the results suggest that a single method of mechanical weed control paired with other weed management tools, such as herbicides, could also effectively target weeds at different timings.

Like herbicides, correct timing of mechanical weed control is critical to maximize weed control while limiting crop injury. The harrows and rotary hoe can be used prior to crop emergence, or provide selective weed control in-crop. The rotary hoe is limited to the cotyledon stage of peas and lentils, while harrows can be used up to the 5 node stage. Inter-row cultivation is non-selective in its weed control, but may be safely used until much later crop stages (e.g. 10 node).  In all cases, higher seeding rates are recommended to offset potential crop injury.

Although still recommended, higher seeding rates may not be as necessary when using European designed inter-row cultivators capable of accurately targeting weeds between crop rows as narrow as six inches. Camera-guided row sensing technology coupled with a cultivator that moves independently from the tractor are the keys to this precision.  Crop Systems researchers at the University of Manitoba have been impressed with the accuracy of their unit across a range of crops from early emergence to just prior to canopy closure – even at speeds of up to 10 miles per hour and using a tractor without GPS guidance. Surprisingly, depending on the shank, these cultivators can also be used to manage weeds in minimum till cropping systems.

Unfortunately, mechanical weed control this accurate comes with a relatively hefty price tag, but researchers hope costs will decrease as this technology becomes more mainstream. For example, University of Saskatchewan weed researchers are using the same guidance system on an inter-row sprayer.

The CombCut, also of European descent, may be the most unique piece of mechanical weed control equipment to hit Canada. Picture a cutter bar of X-ACTO® knives that can be angled and pitched to cut rigid stemmed weeds while allowing flexible young cereal crops to pass through unscathed (or so the theory, and You-Tube video, goes). Recently acquired CombCuts have been put to the test by Alberta Agriculture and Agri-Food Canada and University of Manitoba researchers, who will continue to experiment with the units in 2018. Lessons from the 2017 growing season highlighted the importance of adjusting the equipment for individual crops, crop stages and field conditions.

New equipment for mechanical weed control may not be a fit for every farmer. Fortunately, weed researchers from the University of Manitoba have identified a simple tillage tweak to indirectly help manage volunteer canola. A fall tillage pass within three weeks of canola harvest was found to double volunteer canola germination, allowing greater seed bank depletion prior to fall frost (Figure 1). Spring tillage also caused an increase in volunteer canola germination, but to a lesser extent than the fall. The icing on the cake is that this effect was seen regardless of the tillage implement used, including a light pass with harrows. 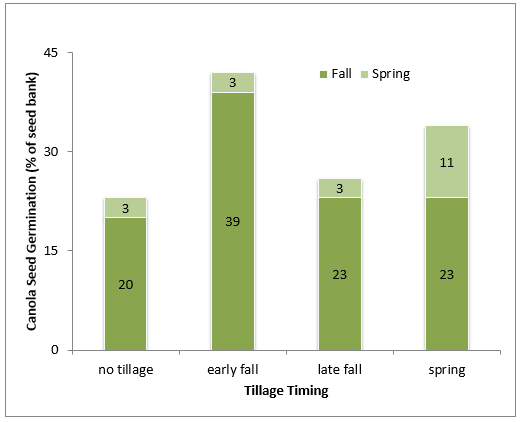 Mechanical control as a tool for weed management was largely abandoned in the 1980s when many prairie farmers adopted conservation tillage practices. In some cases, advances in mechanical weed control technology may allow for its integration back into these systems as a more targeted, less intensive approach. It’s worth keeping tabs on as we’ve only just begun to scratch the surface in this area of research on the Prairies.

Jeanette Gaultier, Ph.D., P.Ag., CCA.
Jeanette completed her B.Sc. in Agronomy at the University of Manitoba and continued her studies at the Universities of Manitoba and Saskatchewan to earn her Ph.D. in Soils & Pesticide Science. She has worked for Manitoba Agriculture since 2008, first as Pesticide Specialist and more recently as the provincial Weed Specialist. Jeanette lives with her husband and three children near Notre-Dame-de-Lourdes, Manitoba, where they operate a U-pick strawberry farm.