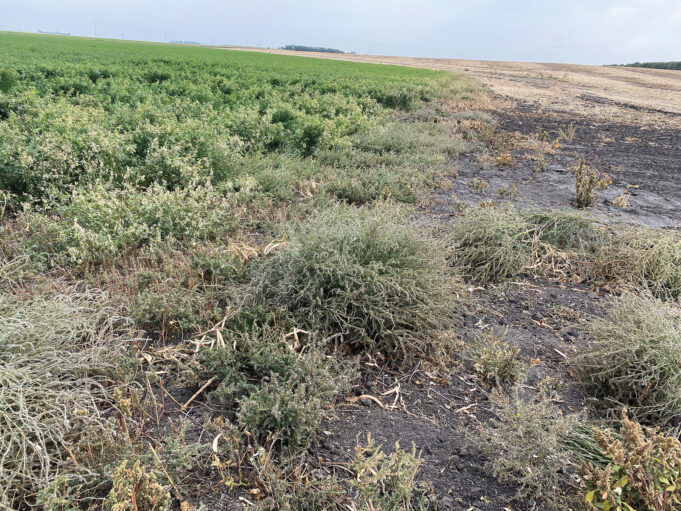 Every winter, time is spent devising crop plans based on crop rotations, markets, and in some cases, specifically to deal with problem weeds. Diverse crop rotations, crop competitiveness, seeding rates, fertilizer placement and cover crops are all opportunities to help manage weed populations, complemented by targeted herbicide usage. Crop selection is generally based on disease resistance, insect protection and yield, possibly with the assumption that yield is reflective of the cultivar’s ability to compete with weeds.

But, if growing a competitive crop is the key to good weed control, how can that be optimized? And, while competitive ability varies amongst varieties or hybrids, its measurement is more elusive than yield and quality traits. For instance, it is rare to see cultivar or hybrid comparisons that discuss relative shading ability or root development.

Some crops are competitive simply because they tolerate weed pressure and maintain yield, but that won’t help reduce future weed problems as the weeds are likely to continue to proliferate. Instead, the desirable competitive attribute is a crop which will provide weed suppression, resulting in reduced weed seed production. In this case, weed suppression by competing for limiting resources – light, nutrients and water – and by responding to the presence of weeds with certain morphological changes – more leaves, longer stems and higher root biomass. Crops will respond to the presence of weeds long before resources are limiting, as if preparing for war.

Twenty years ago, in a paper for the International Conference on Environmentally Sustainable Agriculture, Dr. Robert Blackshaw and co-authors (2002) suggested that crops must be developed for their competitive ability in addition to yield and quality. There are several factors that enhance crop competitiveness, starting with seedling characteristics of rapid germination, early emergence and seedling vigour. Once the crop is off to a good start, rapid leaf expansion, good canopy development, shading ability plant height and early root growth, all leading to an extensive root system, will support crop competitiveness. And while competitive ability varies among varieties or hybrids, its measurement is more elusive than yield and quality traits. For instance, it is rare to see cultivar or hybrid comparisons that discuss relative shading ability or root development.

Conversely, several weeds are competitive because they will tolerate growing conditions that are simply not suitable to most crops. Specific weeds that come to mind include kochia and foxtail barley, each managing to survive in saline areas where nothing else will grow. It is unlikely that assessing crop competitiveness will ever solve these types of weed problems.

A competitive crop that suppresses weeds can dramatically reduce weed seed set and future weed issues. As an example, green foxtail seed set was approximately 25 per cent higher when a semi-dwarf spring wheat cultivar, Norquay, was grown than when a taller wheat cultivar, Sinton, was grown. In the mid-90s, research on spring wheat cultivars indicated that those with higher leaf area per unit of ground area, or leaf area index, at spike emergence, within CDC Merlin and AC Minto, provided a competitive advantage over wild oat, resulting in 15- to 30-times less wild oat regrowth than other spring wheat cultivars. A comparison of 250 wheat cultivars in Australia indicated that historical varieties, dating back to 1880, suppressed weeds more effectively than many newer varieties, based on early season biomass accumulation that possessed more tillers while being leafier and taller.

An additional benefit, based on work in Australia, shows that a competitive crop will result in better harvest weed seed management because the weeds grow taller and retain their seed better. This means that more of the weed seed goes through the combine to be collected in a chaff row or destroyed as it passes through a seed destructor. Similar changes have been noted in many crops in western Canada, for example, whereas the crop competition increases, wild oat internodes are more elongated and redroot pigweed’s plant structure becomes much less branched, resulting in seed production much higher in the crop canopy (as shown on the left)..

Contemplating crop selection for problematic fields is likely different than for most of the farm. There isn’t a magic combination of genetics that will ensure a competitive crop in every field, since weed species will differ in their response to crop attributes. While green foxtail was suppressed more effectively with a taller cultivar of wheat, downy brome was more impacted by semi-dwarf winter wheat than by taller cultivars. With that in mind, there are several factors that should be considered when selecting a hybrid or cultivar for the weediest fields, such as:

1. Weed biology. Know the tendencies of the weed issue in a field to decide how intense the crop competition must be in order to even marginally impact future populations.

2. Crop selection. Based on crop rotation and farm profitability, there are likely more appealing crops to grow. If a weedy field is a habitual problem, it may be time to try a perennial crop or change up the crop rotation for a few years to get it back under control. From a crop competitiveness standpoint, Blackshaw et al. (2002) have suggested that for Western Canada, the following ranking reflects each crop’s competitive ability:

3. Hybrid or cultivar selection. Once a crop is selected, that selection may be fine-tuned by seeking a variety that has early season growth. This may not be the same variety used on the rest of the farm, and it may not be the highest yielding on most fields, but it’s selected based on the weed problem. Take into consideration the height, leafiness and growth habit when selecting.

4. Seeding rate. A higher plant population may improve crop competitiveness by increasing crop growth, causing canopy closure to occur earlier and resulting in less light for weeds to grow. In addition, the roots use up the available water and nutrients, therefore reducing the opportunity for weed growth. By seeding a barley crop at 3.7 bushels per acre, wild oat seed production was reduced by half over a seeding rate of 0.9 bushels per acre.

5. Seeding date. A crop will be more competitive if it emerges before the weeds rather than after weed emergence.

In the battle against challenging weeds, it is important to use every weapon in the arsenal. While crop competition alone is unlikely to eliminate a weed population, selecting a more competitive hybrid or cultivar can enhance other management strategies. There are several weed scientists studying crop competitiveness as an important factor in many integrated weed management strategies, as some other weapons – herbicides – require more support in the war against weeds.