Home Seeding Technology Ahead of the Curve

The demand for Canadian farmers to produce more from every acre while remaining environmentally and economically sustainable means they have constantly sought new ways to farm better. Still, the perceived silver bullet of precision agronomy has been received with mixed reviews over the years. On the progression scale, they sit anywhere from leery, to gradual adopters, to bleeding-edge advocates of its paybacks.

While farmers contemplate its adoption, so do the ag manufacturers behind the innovations delivering optimal technology to suit farmers’ unique needs and targets. Whether it’s a break-out product achieving never before seen results or a incremental improvement upon generations of development, there’s virtually an option to fit every situation.

“A lot of the reason some farmers don’t leverage agronomy to a high level is they haven’t had the machinery to execute on it fully, or at least they haven’t believed they have,” says Noel Lempriere, vice-president of marketing and software solutions at Clean Seed Capital Group.

The company is hopeful the recent November 2020 launch of its SMART Seeder Max and MAX-S will disrupt the seeder industry. The up-and-coming tech company shaking up the ag space describes its new machine as “the Tesla of seeding.”

Farmers can now experience the accurate rate distribution of planter-style singulation at the same time they meter seeds for a multitude of crops and up to four volumetric products independently. The SMART Seeder MAX also brings air seeder-style efficiency to seed and plant crops in a single pass, no-till machine with hyper accuracy. “It’s getting down to managing every foot of the field with up to five different products independently,” says Rush. “It validates this by tracking where those products go based on the sensors on the machine.”

It also introduces the first-ever capability for six variable placement options, including deep-band, side-band and paired-row placements. Getting that precise placement of seed, and where products are placed around it, is vital to quick and even plant emergence. “This mitigates harvest timing issues, weed and disease pressure, and gives the best chance for those seeds to produce the maximum yield,” says Rush.

“In a very dry or a very wet year, we see tremendous root development and emergence out of the furrow a lot quicker when you’re not having to overcome that soil pressure,” says Rush. “These plants really get a leap on traditional seeding methods.”

Such sophistication simplifies a farmer’s day. While traveling across the field, necessary adjustments are made without losing precious time. “Furrow product placement options are a 30-second change,” says Rush. “A farmer can go from a single row of cereal to a paired row by changing settings.”

Clean Seed promises a push button plug-and-play scenario. Users program everything by touch screen on their chosen device with SeedSync software. The system’s portals are the control centre for accurate singulation and volumetric seeding output, as well as inputting prescriptions for farmers or their agronomists.

While the SMART Seeder MAX has all the features to keep farmers ahead of the game as they increasingly adopt progressive agronomy, its design is such that benefits will be easy to see. The flat rate setup is maintained and controlled through machine speed and precision RTK. Set at the MAX, it delivers accurate seed and product delivery with turn compensation and row by row overlap protection. “It’s a set it and forget it scenario, the system will self-manage,” says Lempriere.

Merging the two technologies is SeedMaster’s answer to ongoing challenges around distribution variation in air seeders, tested over the years as high as 10 to 20 per cent from row to row. SeedMaster designed the UltraPro II to overcome the problem by avoiding product being split at distribution towers, thus upping its accuracy.

“Its metering capacity for seed and fertilizer applications is 25 per cent better than its first-generation predecessor and can be configured with its precision metering from two tanks into a single air stream,” says Kent. As proof, SeedMaster hired the Prairie Agricultural Machinery Institute to test the UltraPro II’s even distribution across its drill. The results showed variation down to three-to-five per cent.

SeedMaster’s engineers also designed its new products for greater precision in seed placement. “The history of seeding equipment has gone from air seeders to air drills, then to precision drills,” says Duane Kent, Alberta territory manager at SeedMaster. “The biggest advancement through each stage of this has been around placement.”

To deliver farmers better placement accuracy, the Ultra SR is an improved design over other three- and four-rank toolbars on the market. Because its design is a single 60-foot rank unit, it’s extremely responsive to uneven terrain using sensors to monitor and automatically adjust as it travels across the field. All its dual knife openers along the rank stay engaged in the ground at the proper angle to achieve accuracy in placement, optimal depth and packing pressure.

“It takes things to the next level in precise and consistent depth for both seed and fertilizer placement,” says Kent. “It also allows for consistent row spacing even if the drill is turning around corners or obstacles in the field.”

Section control and VR capabilities continue SeedMaster’s tradition in the Ultra SR along with premium features that realize efficiency and return on investment for farmers. “We’ve got scales on each tank to make things easier for loading and also our SmartCal feature,” says Kent. “It allows the operator to calibrate in real time while they’re seeding. They can confirm or adjust their calibration as needed on the go [to] reduce input costs.”

Efforts also meet the farmer’s need to work quickly with ease. For instance, the SR is a single unit, not a train. “Pulling a conventional air seeder usually involves at least two units, maybe even three. This is a much simpler operation for the farmer,” says Kent, adding it requires less horsepower and less physical material is in the field.

Better innovation tackles residue management with the Ultra SR’s ground-driven rotating spoked wheels between its openers to pull residue through. “With all the openers at the back of the drill, it leaves a field finish not usually seen by an air drill,” says Kent. “There are no tire tracks driving over the seeded rows. Even any residue that might flow through ends up between the rows and nothing piles onto that actual seeding row.”

As Prairie farmers take on more advanced practices, companies continuously work to leverage the latest tech to ensure precision options are available. This spring will mark the first time farmers have access to arguably the most advanced and accurate seeding tech, reflecting industry’s response to the slow and steady adoption of precision ag at all stages of the growing season. 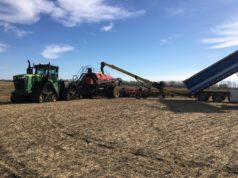 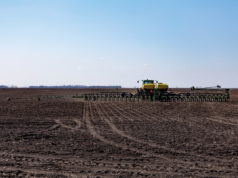