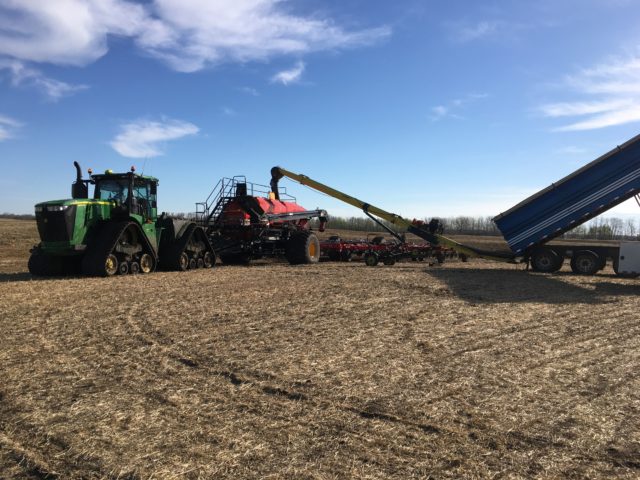 Acquiring new seeding technology can be an advantage on your farm, once you’ve familiarized yourself with it and survived the learning curve. Two Prairie farmers recently upgraded their seeding equipment and found the new equipment gave them real, measurable advantages.

Chris Allam farms with his brother, father and mother. The family has farms in the counties of Strathcona and Thorhild in Alberta. They farm about 15,000 acres of wheat, barley, oats, peas and faba beans.

Currently, the family runs two 60-foot Seed  Hawk drills with 660-bushel tanks that have been modified to 690.

Allam says his family first became interested in the Seed Hawk seeders, because their neighbour had been running them.

Conserva Pak was building their own machines and they needed to be purchased from the factory. John Deere eventually purchased Conserva Pak and the Allams kept buying them.

They noticed their neighbour’s crops were even and maturing more quickly than theirs. The seeding depth also seemed to be more accurate.

“There are some shortcomings with Seed Hawk, but what really matters are your seed placement and the accuracy of that placement,” says Allam.

The Allams, farm a wide variety of terrains including sand, a high-organic peat moss, clay loam, gravelly ground and gumbo in some places.

The downfall of the Seed Hawk is that it doesn’t penetrate well into hard ground approaches
and solonetzic soils. The John Deere drills Allam had used in the past would suck down deep, but would also throw up soil. The Seed Hawk doesn’t do that.

“Everybody seems to be moving towards scales and the Seed Hawk was a little ahead of the pack in terms of having scales on the tank. That’s huge,” he says. He also likes the individual meter motors across the machine and says the half-inch-wide openers are a benefit.

“It doesn’t throw as much dirt as other drills. Having a half-inch piece of steel being pulled through the soil is one of its main advantages,” he says.

The family has also put on Airguards and dehumidifiers on the seeders. They’ve actually been working with dehumidifiers for years.

“We run 24/7 and are seeding 15,000 acres with two 60-foot drill packs, so when the humidity comes up at night, the dehumidifiers from Airguard have been paramount in 24-hour seeding and maintaining efficiency,” he says.

Beyond that, Allam is pleased with the app that comes with the Seed Hawk seeder. While the wireless works, it is not perfect, and there are a few glitches. Allam sees some room for improvement. They also had some issues with the towers, and had to replace them with John Deere tower heads that had full one-inch ports, in comparison to the smaller Seed Hawk ports. Replacing the ports increased productivity.

Allam says there was a learning curve involved in switching to Seed Hawk from John Deere.

“You do sacrifice a little bit of reliability, but at the end of the day, we’re growing better crops because of it,” he says.

Since switching to the Seed Hawk, he’s found more uniformity in crops. Wheat is easier to desiccate and the canola grows at the same stage.

“We made the decision to straight cut all our canola so having it mature evenly is a good thing,” he says.

In organic soils, the Seed Hawk seems to do a better job of placement.

The good seed placement and the lack of throwing soil were two advantages the Allams noticed immediately. Allam says the switch was a profitable one for the farm. They paid less for their Seed Hawk equipment than they did for John Deere, which resulted in an increase in profitability on their farm. Watching their neighbour’s success inspired them to make a leap.

“Watching key producers make the switch to a different kind of machine gives you a lot of confidence,” he says.

It’s a good idea to talk to other producers and ask them what they think of their seeders, says Allam.

Chad Kieser farms with his father-in-law and his in-law’s brothers near St. Albert, Alta. They farm about 18,000 acres of wheat, barley, canola, peas, oats and malt barley.

When he started farming with the group, they used Flexicoil drills, and ended up purchasing a 2018 and a 2019 Case Hoe Drill with sectional control. The drills, which are identical, have seven 10-foot sections.

Both drills are set up exactly the same with 12-inch spacing and a four-inch paired row.

“We just single shoot everything. We chose the Hoe Drill because we were limited to five miles an hour [8 km/h] when we were using the Conserva Pak. In 2018, we seeded just under 20,000 acres of crop with two drills in a really timely fashion. We did up to 600 acres with one drill a day in the cereals, single shooting and spraying ammonia ahead of it,” he says, adding they were operating at speeds of up to 13 km/h.

The group has been asked if they would like to switch to a precision drill, but they like the speed of the Hoe Drill, and says that the price of the precision drill does not make it worthwhile for them.

“In our mind, there’s no need to go to a precision drill and spend a whole bunch of money. The Case Hoe Drill is a decent drill,” he says.

The drills seeded and levelled well creating satisfaction for Kieser and his co-workers.

The global positioning system worked well, but there were a few software issues with the sectional control. They changed the RTX system on the GPS, and it worked better after that.

“You’re not just going in there and flicking the switch on and off. This thing will do it for you. In the headlands, we still run it on manual because they don’t have the software spot on yet,” says Kieser, “There was a learning curve for the ‘start early’ distances for the seed, and the ‘stop late’ distances. You have to play with that a little bit.”

Kieser says the Case Hoe Drill is efficient because of the speed at which they can seed. Precision drills are a lot pricier and buying one doesn’t add up to savings on the farm.

As an added bonus, the Case Hoe Drill is light and won’t get stuck in the mud. The new ones have high flotation on the carts and weigh substantially less, so they don’t cause as much compaction.

“Once we get running really good, it’s a really good and efficient system we have, so we don’t want to change. People are still really amazed that we do what we do with two drills,” says Kieser.