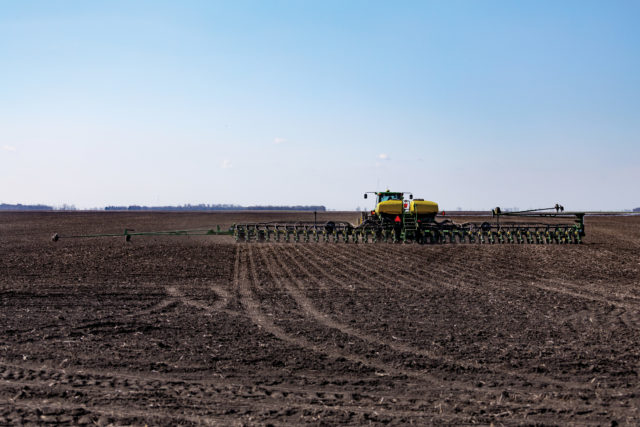 As far as Colin Rosengren is concerned, seeding technology hasn’t advanced a whole lot since the early ’90s when air drills started to gain traction.

“I don’t think there’s been a big change in seeding equipment at all over the last 30 years,” says Rosengren, who farms near Tisdale, Sask. “It’s changed very little, and in some ways, not for the better.”

The realities of farming in 2018 are different than they were even 10 years ago. As margins narrow and global demand for food grows, farmers need to do more with less, maximizing their soil and water so that every seed is as productive as possible.

“I’ve seen how critical the soil environment is to plant health and ultimately yield, and the Hoe Drill is the closest machine to doing what our goals are in terms of soil environment,” he says.

The Hoe Drill, which Rosengren used for the first time this growing season, is a precision air hoe drill opener that improves accuracy in seed and fertilizer placement. Rosengren, who deals with patches of soil compaction on his farm, is happy to try something completely different in his approach to working the soil come springtime.

“This was kind of an instant fix for us to improve the seedbed,” he says. “For our soil types, it’s a very good machine for assisting plant health and getting good emergence rates on all crops. Hopefully over the next few years we will see that hardpan disappear and we’ll have a little more mellow soil for better root growth. That’s our goal.”

It’s still early, yet Rosengren says the drill has already helped make a positive difference in the performance of his crops.

“We had our best barley crop that we’ve ever had,” he says. “We saw better emergence rates than the guys seeding beside us during the dry spring here. It’s tough to attribute that fully to the machine, but we were certainly happy with our emergence in challenging conditions.”

Despite some positive attributes, the technology has a long way to go before it offers the type of accuracy most farmers require.

“I like the way it works in the soil, but it’s still an air drill with an air drill delivery system and all of the problems that come with that,” says Rosengren. “We have variable rate and that helps, but it still has uneven distribution.”

In search of a better product and system, some farmers have started exploring planters instead.

Historically, planters have been used to plant corn in the United States and other corn-growing regions, but more and more, planters are becoming adapted to seed canola, soybeans, pulses and even cereals.

Chris Haeusler, who farms near Humboldt, Sask., seeded his canola, soybeans and maple peas this year with a HORSCH Maestro SW planter for the first time – and he’s completely sold on it.

“Would I go back to an air seeder? Hell no; not a chance,” says Haeusler. “It really comes down to dollars and cents. Either I get better yield or it costs me less to put in. The planter does that.”

Unlike air seeders, planters eliminate variation with seeding depth and from row to row, allowing better placement of each seed. Typical seeding rates are set to compensate for seed mortality rates that can range from 40 to 60 per cent. With a planter, farmers can place one seed perfectly and grow one perfect plant over as many acres as needed.

Farmers may cut their seeding rate in half, or better, by having a planter.

“Last year, between my soybeans, peas and canola, I think I ripped $163,000 out of my seed costs, and we’re probably going to cut it even lower this next year based on our test plot results,” says Haeusler. “I’ve seen the results for myself.”

“We cut our seeding rate by about a third and we ended up with a perfect plant count. It worked out nicely,” says Haeusler, adding he also saved in fuel costs using the planter.

“You don’t have any of those scraggly little skinny canola plants because there’s two or three side by side. Every stalk is the size of your pinkie, and it’s in a line all the way down the row like that,” he notes. “Every plant is nice, big and healthy.”

Despite hot and dry growing conditions all summer, Haeusler’s canola yields were in the mid-50s to about 60 bushels per acre.

“You can’t knock that. It’s some of the better numbers I’ve seen in the area,” he says. “The planter versus the drill will give you at least the same yield.”

Haeusler says moving to a planter from an air seeder requires a shift in thinking. It’s not a direct replacement for an air seeder, and while the planter itself is user friendly; it’s a completely different way of putting seed in the ground—the old rules don’t apply.

“It’s a learning curve and a half,” he says. “The general rule of plants per square foot gets thrown out the window with a planter.”

There is no air cart available with the planting equipment currently on the market. “The problem is you’ve got to apply fertilizer separately,” he adds. “There’s no one-shot pass yet.”

Growing pains aside, planters are quickly becoming a viable option for canola, soybean and pulse crops—particularly on farms that already run two drills.

“If you have small acres where you’re only using one drill, you’ve got to be able to look at the dollar value of holding on to that second machine,” he says. “If you’re only going to seed small acres with it, a $400,000 price tag is tough to justify. But my drill does all my conventional crops and my planter does my peas, soybeans and canola. It works for me.”

And for Haeusler, the results speak for themselves.

“My second drill was at the point where it needed to be replaced, and it was either go on to another new, larger drill or go to a planter,” says Haeusler. “For the seed savings, I figured it was worth giving a kick at the can. But with the way the plant stand came up, the evenness of the field, the nice healthy-looking canola plants—the planter is a no-brainer.”