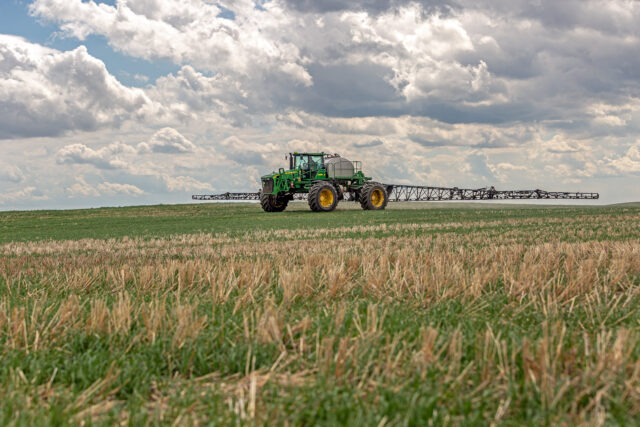 Ask many farmers across the Prairies about their most feared weed and chances are good that kochia will either be number 1 or not too far down the list. Ever since being discovered in southern Alberta in 2011, glyphosate-resistant kochia has spread across Western Canada like a tumbling wildfire.

Chemical companies have worked overtime to develop new formulations to fight resistance in the annual broadleaf weed and extend the viability of glyphosate, its longtime herbicidal nemesis. Although new products have other unique properties, kochia control is a consistent theme. All three are registered for use in Alberta, Saskatchewan and Manitoba as well as the Peace region of B.C.

Certitude is a new pre-seed herbicide from BASF Canada designed to be applied pre-seed to canola.

One of the biggest features setting Certitude apart from similar products is its inclusion of a Group 27 active ingredient called topramezone. This represents the first time a Group 27 ingredient can be used in a pre-seed canola herbicide, says Andrew Geerligs, senior brand manager of insecticides with BASF Canada. Certitude’s other active ingredient is the Group 6 chemical bromoxynil.

“I think what makes topramezone very significant, and a great story for Western Canada, is that it’s a new tool for canola growers dealing with challenging weeds,” he says. “What’s great about Certitude also is that the two modes of action provide both contact and systemic activity and that is why we get such consistent performance.”

A broadleaf herbicide, Certitude is intended to be mixed with glyphosate for control of several grass weeds as well, says Geerligs. “[Certitude] is an add-in. When mixed with glyphosate, those three modes of action are very complementary and with them you get very broad spectrum weed control.”

Certitude helps sharpen the performance of glyphosate on a host of weeds including Lamb’s quarters and Redroot pigweed, says Geerligs. Most noteworthy, though, is its control of kochia and volunteer canola.

“Those are the two most commonly targeted weeds in canola production,” he says. “[Certitude] really offers the industry-leading control of kochia and volunteer canola. With kochia specifically, it controls a lot of the Groups 2-, 4- and 9-resistant biotypes.”

Certitude is in some ways a response to growing awareness of the risks volunteer canola can present to canola crops, says Geerligs.

“I think some growers in the past have thought, ‘If I’m growing a canola crop maybe having volunteers come up is OK.’ But as more information and work is done we know volunteers don’t yield as well as the seed you’re planting. Also, those volunteers can be hosts for pathogens like clubroot, blackleg and can even increase flea beetle populations.”

Modern thinking behind canola crop density can also require action on volunteer canola, he says. “We know canola yields are maximized at five to seven plants per square foot. More than that is not optimal and can even cause lodging challenges.”

“Our recommendation is the closer to time of seeding the better as it allows for more weeds to germinate,” he says. “Certitude does not offer any residual properties so you want to have the weeds present and actively growing. That’s going to give you your best results.”

Nufarm’s ThunderHawk is a pre-seed burndown herbicide for a wide spectrum of broadleaf weeds ahead of barley, oats and wheat. It’s the latest in the company’s suite of pre-seed herbicides which also includes Conquer, GoldWing and BlackHawk.

Minimizing herbicide resistance was a top-of-mind priority going into the development of ThunderHawk, says Holly Nicoll, head of marketing with Nufarm Canada. The sheer number of modes of action attest to this. The product includes Group 2 (florasulam), Group 4 (MCPA ester) and Group 14 (pyraflufen-ethyl) active ingredients.

“Traditionally, farmers have done a pre-seed burndown with a glyphosate-only application and as a result there’s an increasing amount of weed species becoming resistant to Group 9 chemistry,” says Nicoll.

Nufarm urges tank-mixing ThunderHawk with glyphosate for the best possible control on a larger range of weeds.

“When you tank-mix it with glyphosate you are up to four active ingredients and it’s just a really solid strategy to offer multiple modes of action on several weeds for broad spectrum weed control.”

Fighting kochia and kochia resistance continues to be a priority for Nufarm, and ThunderHawk is no exception. The product controls Group 2-, 4- and glyphosate-resistant kochia biotypes when tank-mixed with glyphosate, she says.

Nufarm claims ThunderHawk offers extended residual control, up to three weeks in some cases, making it a good fit for control of volunteer canola.

“It’s very strong on volunteer canola because of the florasulam in it which offers some residual activity. That’s a benefit to growers in the black soil zone that have some diverse environmental conditions with weeds emerging at different times in the spring.”

Corteva Agriscience, the amalgamation between Dow Agrisciences, DuPont and Pioneer launched in 2015, continues to build its portfolio of cross-spectrum herbicides with Rezuvant XL. Featuring Groups 1 and 4 active ingredients as well as the company’s proprietary Arylex active ingredient, Rezuvant XL is intended for barley as well as spring and winter wheat. It is primarily meant for black soils.

Rezuvant XL features control of grass weeds such as wild oats, green foxtail and barnyard grass, broadleaf weeds including cleavers, hemp-nettle and wild buckwheat as well as a number of others in both categories. Its recommended tank mix is MCPA Ester 600.

“It has the Arylex active which we’re really excited about because it performs consistently over a wide range of conditions, in the process opening up some more spray days for folks as well,” says Orr. “It also features the convenience of a co-formulated product instead of components in a box.”

According to Orr, a major difference between Rezuvant XL and its 2019-released namesake product is expanded control over kochia.

This, he says, is due to 25 per cent extra content of the Group 4 active ingredient fluroxypyr in the newer herbicide. Corteva’s Prominex, a new annual and perennial broadleaf herbicide for cereal crops, sports the same amount of fluroxypyr.

“In combination with Arylex active and clopyralid for superior thistle control, [Prominex] features better and more consistent control of kochia and other weeds,” says Orr.