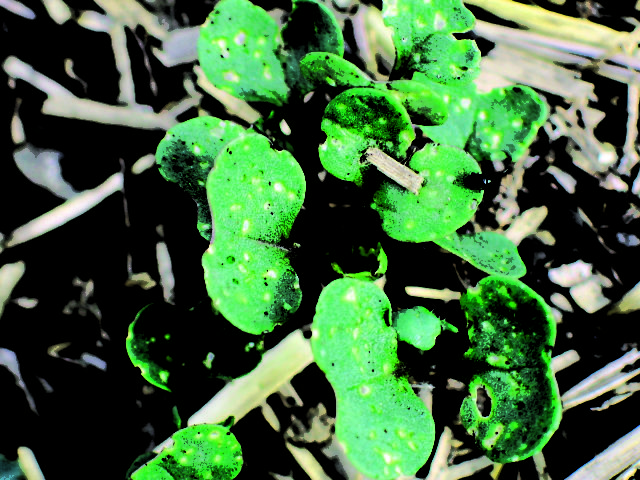 The new year is well underway, but farmers planning a pest and disease control strategy for the 2019 cropping season will still be working with last year’s toolbox.

“For the most part, this isn’t a particularly exciting year, which isn’t necessarily a bad thing,” says Ian Epp, an agronomy specialist with the Canola Council of Canada. “A lot of it will be status quo, especially on the insecticide fronts, where there haven’t been a lot of changes on products registered or use patterns, so we’re not expecting anything too new.”

Clubroot continues to be a prime concern for canola farmers, but Epp says the growing list of clubroot resistant varieties provides the strongest option for those looking to control or prevent the disease.

“Given the nature of clubroot, being a soil borne pathogen … there aren’t a lot of fungicides that are very effective,” says Epp. “In its resting spore stage it’s a very, very hard thing to kill.”

Research on the effectiveness of liming is ongoing, but the specialist noted it’s an expensive option that yields variable results. However, for low pH soils, liming can result in additional benefits around nutrient efficiency.

“Which might make the cost of applying lime a little easier to swallow,” he says. “For some of our soils, especially in Alberta that already have very low pHs, changing the pH with lime may have some non-clubroot benefits.”

The possibility of using seed treatments to manage clubroot traces on seed surfaces is also under exploration. But at the moment, no fungicides designed for clubroot suppression or control in canola are registered in Canada.

Sclerotinia will also being the minds of canola farmers this season, especially if the year ahead is another wet one, Epp adds.

“Sclerotinia can still be a significant yield robber, but it is completely dependent on the environmental conditions during the growing season,” says Epp. “And there’s nothing new coming out in 2019 that I’m aware of, but it’s been that way the last couple of years.”

Instead, attention has been focused on giving farmers more tools to help them decide if and when to use one of the several fungicides currently registered for sclerotinia stem rot in Canola, including Astound, Lance, Proline 480SC, Quadris, Quash, Rovral Flo and Vertisan.

“Researchers at AAFC, the University of Manitoba and University of Lethbridge are studying various biological control options for sclerotinia in canola. Researchers have identified bacterial strains that appear to have biocontrol activity against sclerotinia sclerotiorum, as well as a fungicide, however these are still in development,” the council states on its website.

Coniothyrium minitans can also be used in edible dry beans, and soybeans, to prevent sclerotia from germinating, while several foliar fungicides that are used to control ascochyta blight may also control sclerotinia.

“The problem of ascochyta blight in chickpeas is very aggressive and it was the real cause for the dramatic crash in chickpea acres,” says Sherrilyn Phelps, agronomy manager for the Saskatchewan Pulse Growers, referring to a decline in acres in the mid-2000s.

“We have had improvements in resistance … but that still has a long ways to go,” she says. “We’ve also had a number of fungicides registered for controlling the disease, which has been great, but the problem we’re having now is that there is resistance to one type of fungicide called strobilurins … in the ascochyta.”

Phelps says that while a number of new fungicides have been introduced for pulse crops over the last decade, the overall tally is quite small, meaning resistance will continue be an issue.

“There is still is only a limited number of fungicide groups in existence and the overuse of some of these fungicides can lead to the selection of resistant pathogens,” she says. “So rotating fungicides is critical with any of the pulses, just like it is with weed resistance. Rotating herbicide is a weapon in disease management and you also need to rotate your fungicides.”

Farmers worried about the spread of herbicide resistant kochia won’t have any new inputs to rely on this season either, but Phelps says the previously mentioned rotation strategies will also extend the efficacy of existing herbicides used to control kochia.

“Kochia is the main weed issue across the Prairies, for not only pulses, but a number of crops and that is coming out of 2018 which was a relatively dry year and kochia tends to be a little more competitive under dry years,” says Phelps.

Overall, kochia is the 10th most common weed on the Canadian Prairies, but it’s bumped up to fourth place in southern, semi-arid grassland regions. It’s also a competitive plant that produces copious amounts of seed and does well under stress, making it difficult to control even when it’s not herbicide resistant.

“They actually found that 10 per cent of the kochia populations that were tested (in Alberta) had resistance to Group 2, which is your ALS herbicides, Group 9 which is your glyphosate and Group 4, dicamba. So that’s just plain scary,” says Phelps. “You look at the herbicides that are registered for use in pulses we’re really only now left with Group 14s and 15s and some Group 3s.”

The agronomy manager added it may only be a matter of time before resistance to those groups develop as well.

“So, with weed management, specifically kochia, there’s got to be a shift in how we look at managing that weed and more of a holistic approach in terms of looking at other factors we can utilize,” she says.

Those looking to keep cleavers out of their canola are in luck, however. While not exactly new, Quinclorac now has a maximum residue limit in place for export markets, opening the door to use on Canadian crops.

“For some growers, where cleavers are challenging, this just gives them another tool in the tool box,” says Epp.

Maximum residue limits have also been established in the U.S. for the growth regulator chlormequat chloride, or Manipulator, giving wheat farmers more options for controlling height. However, not much is new on the disease and pest front when it comes to the 2019 wheat and barley season.

“Every year we’re wondering about how bad Fusarium will be and it always depends on the weather conditions, so if we get that hot humid summer, Fusarium is going to be more of an issue,” says Karen Churchill of Cereals Canada. “But there hasn’t been any new product for a while, although I do expect that, in the future, there will be new product. But right now we’re relying on just a few and hoping for the best.”

But just because there hasn’t been anything new on the market in recent years, it doesn’t mean research is lagging, she stressed. Work on developing genetic resistance to Fusarium is also forging ahead.

“Because of the way diseases evolve and overcome genetic resistance, it is an ongoing area of research, in fact, I think Fusarium in particular is one of the biggest sectors in terms of research dollars, so there is a lot of work going on,” she says.