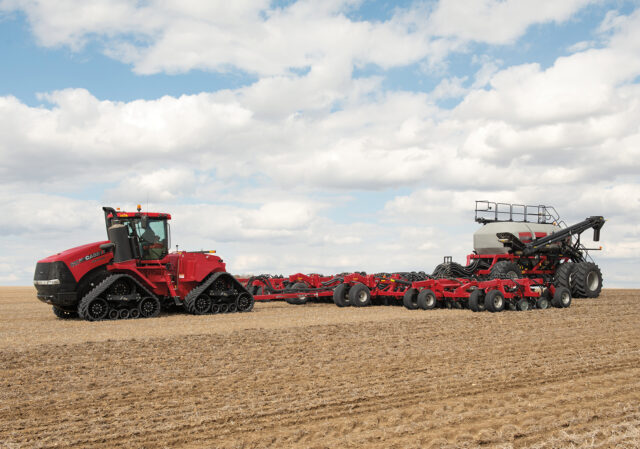 Seeding equipment continues to deliver better accuracy and technology with a common purpose: greater starts for plants and higher productivity. Advancements are upping efficiency, allowing farmers to make the slightest adjustments on the go ensure peace of mind and a strong start for the season.

“For a broadacre grain farmer, the most important operation they’ll do this year is put the seed in the ground,” says Don Henry, CEO at SeedMaster. “If they don’t make sure the seed’s in the right place with good seed to soil contact … nothing else will matter.”

Farmers have a lot to look forward to for that head start. “In the last decade we’ve had significant improvement from sectional control to better planting accuracy in depth of seed to more accurate packing pressure,” says Don Campbell, FieldSMART agronomist at Western Sales.

But selecting seeding tools is not as simple as “what’s the best product out there?” It comes down to the specific needs of each farm. Because of that, Jim Wood, chief sales and operations officer at Rocky Mountain Equipment says seeding equipment sales tend to be special order.

“Most farmers have done their research before they come in to see us because seeding is so individualized for each farm,” he says. “While tractors and combines come with more generalized specs, seeding is such an individual preference and application. Everyone has a different size requirement, tank configuration, spacing and or tools.”

As variable rate seeding and fertility continue to sweep Prairie fields, accuracy continues to be the focus in seeding tools.

“The whole precision side of seeding equipment means we continue to be more accurate and do a better job,” says Henry. “We can have a better bottom line when we ensure we’re spending our money in the right places and getting the most from our fertility programs. The cost of seed is high. If we don’t get it placed in the right spot for the right germination, it hurts our yield dramatically.”

The way seed is metered has also improved. “Historically, we’ve measured this in pounds per acre, which isn’t the greatest measure,” says Henry. “Depending on the crop, an agronomist will tell you the optimal number of plants per square foot or per acre.”

Fertility is another consideration. “What is the farm’s fertility plan, where do they need to put that fertilizer on in their area to give their seed the best opportunity to take advantage of their nutrient package,” says Henry. “Our farmers are well-educated on this and very particular about this accuracy. They need the equipment that’s going to give them that in their operation.”

Efficiency is a must. “There’s a big push for singulation, putting as little product in the ground as is needed rather than blasting product over the field, particularly for canola,” says Wood.

Garth Donald, co-founder and manager of agronomy at Decisive Farming, says the industry has come full circle with seeding tools going back more than 15 years. “The double disc press drill was one of the most accurate means of seeding back in the day,” he says. “Then the hoe drill came in and then no-till. That’s when things kind of changed as we went into air hoe drills so we could direct seed.”

Technology progressed from the hoe drill to parallel linkage drills on most well-known seeder manufacturers. “They have a ground following ability to maintain specific seed depths and contour through the different topography of the field.”

That ground-following capability continues to be key. “[It] allows farmers to keep the same seed depth from one end of the drill to the other and right through the middle,” says Donald. “It doesn’t matter what that variance is. Most of these systems have the capability of eight to nine inches of travel within each of the shanks. Instead of a gang situation, now it’s changed by shank that is set and can follow that ground contour.”

The seedbed now sees more even plant emergence while saving effort for the farmer who would typically set their machine at the desired depth and check it throughout day with some of the older technology. “The new technology takes away some of the concern in that everything’s still where it should be and keeping the depth consistent,” says Campbell, adding that there is better packing pressure capabilities, as well.

Currently, planter-style systems are coming to market for seeding grain. “We know that a row-crop planter is probably the most accurate seeding system in the market,” says Donald. “Clean Seed’s SMART Seeder has basically replicated the row-crop planter but made it so we can use it within the oilseed and cereal base on a narrow row spacing to give that accuracy.”

The other big push in seeding equipment is on the technology front. While it is complex, it doesn’t have to be complicated and increasingly farmers are being given cloud integration options.

“It’s all in the monitor setup within each drill,” says Donald. “Vaderstad/SeedHawk uses an iPad-based program, their Icon system. Everything goes through their cloud to the iPad for it to run the drill. Bourgault uses the TopCon X-35.
Their TriMax Triple Shoot system is more mechanical on the cart around which runs go where and the same with their precision seed attachment, but it is run through the monitor once it’s manually activated.”

This New Year, farmers have lots to look forward to.

“Everything is about making adjusting on the go easier for the farmer,” says Wood. “All the new products coming out are aimed at making those in-field adjustments better and giving the farmer the ability to put the product in the right place with the right amount and make it more efficient by filling the tank less and getting more acres done in a day.”

Donald broke down some of the latest and greatest in seeding, including Clean Seed’s new offerings.

“This new generation will just be available this year and it’s a significant change,” says Donald. “They have a lot to prove, but within their first demos they’ve seen good accuracy.”

Bourgault also made developments this year. “Part of this is their new TriMax Triple Shoot System. It took the benefit of the sideband or two-shank systems – like a SeedMaster, Vaderstad/SeedHawk or Conserva Pak,” he says. “They’ve now got a seed shank and a fertilizer shank, and still have their mid-row bander.”

The secondary fertilizer shank is designed for non-mobile nutrient application. “We can now pull it away from the seed and prevent seed injury,” says Donald. “We can put higher rates of those non-mobiles, but out in the mid-row we can still put the nitrogen and sulfur down.”

Bourgault also added a new singulation system to its drills. “They’ve built the idea of the corn/row crop planter with its accuracy and they’ve actually implemented it into their drill so they have another chamber that goes to individual meters per row to get that accuracy in seeding,” says Donald.

Companies like Vaderstad/SeedHawk now have drills with individual meter rolls to meter per second. “They actually have the ability to do variable rate per meter roll as far as fertilizer or seed application,” says Donald. “It’s been out a couple of years, but they haven’t talked a lot about it.”

Also noteworthy is SeedMaster’s sale of the Dot technology to Raven Industries in the U.S., allowing SeedMaster to refocus back into seeding equipment.

“It’s important to our population and the buyers of our product that we’re becoming more concerned about the sustainability of our farms,” says Henry. “That’s something we have to be aware of as farmers and as manufacturers so we’re meeting that demand.”