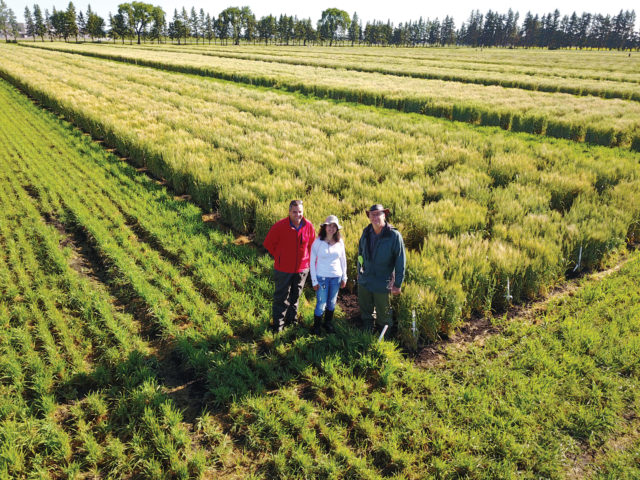 Experts across the Prairies agree: when it comes to the traits farmers are looking for in their wheat varieties and other crops, yield is still king.

But yield doesn’t tell the whole story. Disease, drought and lodging ultimately may impact yield and quality. Crop researchers, aided by the input of farmers, seed growers and dealers, are continually investigating and identifying traits that are making progress on these fronts.

Among wheat breeders and researchers, particularly in Saskatchewan and Manitoba, Fusarium head blight (FHB) is public enemy No. 1. Richard Cuthbert, a leading wheat researcher at the AAFC Research and Development Centre (RDC) in Swift Current, Sask., says he spends much of his time attempting to identify FHB-resistant traits.

The research team’s ongoing efforts include incorporating Fusarium resistance into short-strawed wheat varieties, which typically underperform in that arena compared to their taller cousins. Cuthbert says the Swift Current RDC has been able to break that association in a few cases, but it has taken a lot of time. “It is possible to shift those traits but it takes a tremendous amount of effort in breeding.”

Another challenge has been combining Fusarium-resistant traits from wheats such as Canadian Prairie Spring Red (CPSR) wheat with Canadian Western Red Spring (CWRS) wheat. “We’ve been working to integrate that resistance into more moderately-resistant wheat types – especially in CWRS which is a more premium market class.”

Heat and drought have become quite important issues for farmers over the past two years, says Cuthbert. Researchers have been looking at traits such as photosynthetic efficiency and the ability of a given variety to hold water. However, these kinds of traits are generally only discovered once a variety has already been developed. “A lot of these things in research are playing catch-up to breeding,” he says.

Lodging resistance and standability is a category in which producers’ expectations have grown, adds Cuthbert. “[Some wheat varieties] that came out in the mid to late 2000s really shifted farmers’ expectations of what is possible, especially in CWRS wheat, so much so that varieties that would have been thought to have been quite strong strawed in the past do not make the grade today.”

Simon Ellis is the co-owner of Ellis Seeds, a seed farm and agri-service company located near Wawanesa, Man. The company’s goal is to have access to any seed that can be grown in the province. In their case, that primarily means wheat, barley, oats, flax and soybeans.

Not surprisingly, yield ranks high among the traits Ellis Seeds’ customers look for. In the wheat arena, yield, consistency and moderate resistance to FHB have made AAC Brandon a hit among local producers, says Ellis.

“It’s a consistent high yielder through a range of conditions. We’ve seen some varieties in the past that can be just phenomenal one year but then do not perform as well the next year with a slight change in conditions. When AAC Brandon first came on the market it ticked all the right boxes and farmers stuck with it.”

Soybeans are booming right now among Ellis Seeds’ customer base, particularly with the advent of dicamba- and glyphosate-resistant soybeans.

“The companies have put quite a bit of money into the research and development of early-season beans and pushing the yield,” says Ellis. “Ten years ago, we could hardly sell soybeans but now it’s probably No. 2 or No. 3 on our seller list. It’s a big market player both in the seed and production world in Manitoba.”

Part of this interest is driven by soybeans’ potential in rotations. “I think when farmers have been looking at their budgets they’ve been focused on wheat and canola because they offer the best return,” says Ellis. “However, they knew their rotations were too short and now that soybeans are available, they’re able to expand that two- or three-crop rotation and diversify their risk.”

Based in southern Alberta, SeedNet is a group of 13 independent seed growers throughout Western Canada who grow cereal, pulse and special crop seeds for customers across the Prairies. SeedNet customers are looking for varieties that respond to intensive management, says Greg Stamp, a SeedNet member based in Enchant, Alta. “I think farmers are just starting to ask, ‘With my management style, can I push this variety and make more net money per acre being more intensive with my inputs?’ In wheat, we’re moving past AAC Brandon and on to varieties like AAC Viewfield and CDC Landmark. There are a few more in the pipeline that really respond well to high management.”

Beyond wheat, SeedNet has seen a lot of success with hybrid fall rye. Their Guttino hybrid fall rye has been bred for high yields, lodging resistance and winter survival. KWS Daniello, meanwhile, has been bred for those traits plus low ergot risk and suitability for both dryland and irrigation farming, which is valued by area farmers. According to SeedNet, Daniello also offers a high falling number for milling markets.

Height, standability and seed thickness are among the traits available in several of SeedNet’s new pulse seed offerings, says Stamp. “We have a brand-new yellow pea called Inca developed by the Crop Development Centre (CDC) in Saskatchewan that’s licensed to SeedNet for Alberta and Manitoba. The interest is pretty good; people are concerned about yield and standability and Inca fits into those categories.”

In lentils, Stamp says many customers are moving to CDC Proclaim, another variety licensed to SeedNet by the CDC. A big reason for this is Proclaim’s yield compared to other lentils as well as greater height and seed thickness. It also features tolerance for imidazolinone herbicides.

Lodging resistance is particularly important in the irrigation areas of southern Alberta, says Stamp. However, producers seem to have the problem in hand.

“I would say yield trumps lodging resistance because more and more of my customers are using plant growth regulators (PGRs) to make plants stand up but still go for maximum yield,” he says. “It depends on the farmer. Some guys are comfortable using PGRs while others do not want to take that next management step or that extra pass in the field.”

Beyond plant traits, Rick Stamp—founder of Stamp Seeds and co-founder of SeedNet—points to certified seed as the future of the industry to reduce the risk of purchasing seed that hasn’t been thoroughly tested for quality control.

“Most people realize that cleaning your own seed sometimes makes economic sense but a lot of times it does not,” says Rick. “Seed that is tested properly by the certified testing associations we deal with is a big part of that quality-assured seed we provide.”

Varieties that can tackle any kind of extreme weather or environmental conditions will likely be in demand going forward. “We will need new varieties of crops able to tolerate lower rainfall and different rainfall patterns,” he says. “They need to be able to withstand two to four weeks of no moisture without shutting down. The plant breeders are definitely looking at how they can find plants or varieties that will withstand that.”

New CRISPR gene-editing technology stands to dramatically increase the number of new varieties available and the speed at which they are developed, says Stamp. He believes this is a good thing overall; however, the sheer number of varieties the technology can produce will make every seed he chooses to invest time and money into more of a gamble.

“What will happen is we will have more and more varieties that we will maybe want to multiply up,” he says. “First of all, we need to have a market for that variety or that type of seed with those attributes. But sometimes you don’t know; you have to grow it first and then see if it has market acceptance.”