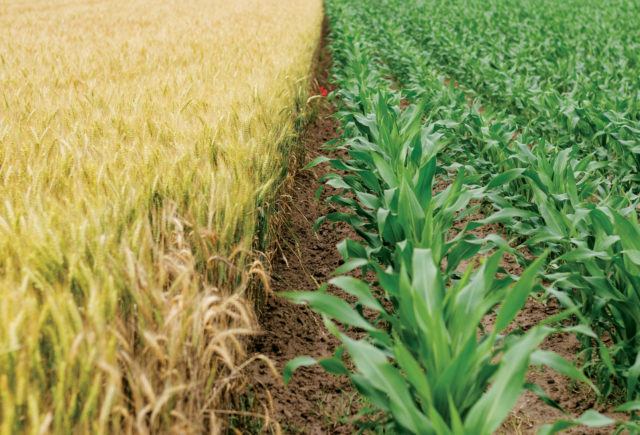 The Prairies were exceptionally dry in 2017, with most of the region receiving less than 85 per cent of normal precipitation. Parts of southern Alberta and Saskatchewan that received less than 60 per cent of normal precipitation were classified as under drought conditions. After weathering a wet cycle pri­­or to 2017 and with continued dry conditions in 2018, it’s a good time for a refresher on herbicide breakdown and persistence in soil.

Herbicides registered for use on Prairie crops strike a balance between effective weed control and limited restrictions on follow crops. This differs from regions in the United States and Eastern Canada that use more herbicides with greater residual activity. The persistence of any herbicide active ingredient can be characterized by its soil half-life (DT50), which describes the time it takes (in days) for half of the product applied to be degraded.

Despite the fact that a herbicide is assigned a DT50 value based on numerous studies, the actual soil half-life of that herbicide may vary under field conditions. With few exceptions, herbicides rely on soil microbes for their breakdown. Therefore, anything that affects soil microbial activity will also affect herbicide breakdown, including soil texture, soil organic matter, pH, soil temperature and soil moisture.

Studies have repeatedly shown that soil temperature and moisture are the most important factors influencing herbicide degradation, with optimal breakdown occurring in warm (20 to 30°C) and moist but not saturated soil conditions. Because of this, we require adequate moisture in the warmest months following herbicide application – June, July and August – to allow for the product(s) to break down in our Prairie soils.

Under dry or drought conditions, herbicide breakdown may be limited and “carry-over” into the next growing season can occur. Herbicide injury may result if a sensitive crop is grown the following year.

Although most of the studies completed to date have focused on Group 2 herbicides, in theory, stacking can happen within any herbicide group with residual chemistries and a target-site mode of action. Researchers at the University of Saskatchewan are now looking into this as a possibility with Group 14 herbicides.

Is it herbicide carry-over?

Following re-cropping restrictions outlined on a herbicide product label generally prevents carry-over issues. Although, as explained, dry conditions like those experienced in 2017 can lead to herbicide injury symptoms in approved follow crops normally grown without issue.

Be sure to rule out other potential causes of crop injury before alerting your agronomist or crop protection company representative to a potential herbicide injury claim. Symptoms that can mimic herbicide injury include chlorosis, purpling, white or yellow “flash,” leaf cupping or puckering and root pinching that can be caused by drought stress, heat stress, frost, nutrient deficiency, insects and/or disease.

What to do if it is carry-over?

This is the hardest question to answer when a follow crop is affected by herbicide carry-over. In most cases, regardless of how dire the field looks at or just after germination, crop condition improves over time. Rainfall can also help a crop “grow out” of injury symptoms. For this reason, it’s usually recommended to continue with an affected crop rather than reseeding. Limited re-crop options and crop insurance deadlines may also support this decision.

That said, there certainly have been situations that warranted reseeding. It’s recommended to discuss this decision with crop insurance, a company representative and/or an agronomist before working a field under.

Also, be prepared to discuss the cropping history of an affected field. This will include specific information of crops grown, seeding dates, product applications and application dates, soil and fertility information and general environmental conditions.

Herbicide carry-over is an unpleasant situation for everyone involved – crop protection companies and their representatives, agronomists and especially the grower. With 2018 looking like another dry year, it’s worth taking a look at your crop rotation to assess potential risks and cropping options.