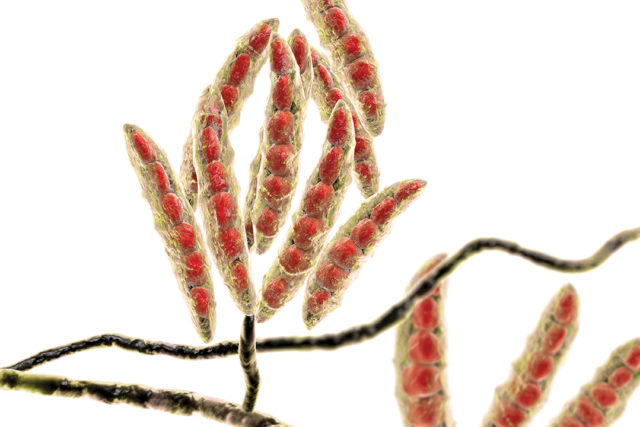 As every cereal producer knows, the effects of fusarium head blight can be devastating but new research done by the Prairie Agricultural Machinery Institute (PAMI) indicates there may be value to be extracted from a crop that is often a total loss.

In the study, funded by the Saskatchewan Ministry of Agriculture with an in-kind contribution from the Canadian Grain Commission, researchers at PAMI’s Humboldt facility looked at a variety of disposal options for fusarium-infested grain and found composting to be an effective way of eliminating one of the most prevalent toxins produced by fusarium. For the researchers, the result represents an important breakthrough when it comes to dealing with a persistent problem.

“We were very excited when we saw the numbers,” says Dr. Joy Agnew, project manager with PAMI Agricultural Research Services, “as were our colleagues at the Canadian Grain Commission. These findings probably won’t change the world and there is more work to do here but they do indicate that producers may have options for disposing of infested grain to the benefit of their pocketbooks and the environment.”

The level of fusarium infestation has grown substantially across the Prairies, Agnew explains. The fungus occurs naturally in the soil and high-moisture levels trigger infestations. “It’s become a huge issue over the past few years and really just took over everywhere,” she says.

Fusarium head blight, also known as scab, typically affects cereal crops such as wheat, barley and oats; in Saskatchewan, durum wheat, spring wheat and barley are the most susceptible. Of some concern, says Agnew, is that infestations have recently been seen moving into all cereals including corn.

Infected kernels are lightweight and for the producer, the result is reductions in yield and grade, added costs, fewer end-use opportunities and lost income. Agnew’s research report includes some startling numbers that shine a light on the magnitude of the problem: the Ministry of Agriculture and Forestry in Alberta estimates losses to fusarium head blight across Canada over the last two decades ranged from $50 million to $300 million annually, and future losses are projected to be as high as $132 per acre.

Until now, producers have had few options when it comes to dealing with the problem. Agnew says applying fungicide can be effective “but there is a very small window of opportunity so the infestation gets out of control very quickly.” Work is underway on breeding resistant cereal varieties but that is a long-term solution.

If the level of infestation is under a certain threshold, Agnew says the grain could be sorted and cleaned, then sold for livestock feed, thereby returning some value to the producer. But for heavily-infested crops, dumping it is the only option. In that case, there is the added environmental risk of spreading the fungus to previously uncontaminated soil.

“Our goal with this study was to assess disposal options that could bring some monetary or environmental value to Saskatchewan producers,” Agnew says. “We were also looking at methods that producers could use on their own farms without huge investments.”

Three disposal methods were studied – combustion, anaerobic digestion and composting. In all three, the researchers focused on the levels of the fusarium-produced toxin deoxynivalenol (DON). The fungus produces a number of toxins but DON is most often used to determine the level of infestation in grain.

Before the study could even begin, Agnew says colleagues at the Canadian Grain Commission’s Grain Research Laboratory in Winnipeg, Manitoba had to develop new protocols for measuring DON in the ash, digestate and compost that would result from the trials. Recognizing the potential significance of the research, the commission donated its time for the development of the required standards.

To determine if burning infested grain would eliminate DON in the resulting ash, Agnew enlisted Prairie Fire Grain Energy Inc. in Bruno, Saskatchewan, producers of grain-burning stoves. Ten-kilogram samples of both high- and low-infested wheat were burned in a stove at a temperature between 150-300 degrees Celsius and the ash that was produced was sent to the commission labs for testing.

“Grain-burning stoves are actually more common than I thought,” says Agnew, “and you can get some heat energy for your home or shop” but the results showed burning did not entirely deactivate DON in wheat.

It also became clear that the fluffiness of infested grain made it difficult to burn. Agnew says increasing the density of the wheat by compressing it into pellets would likely further reduce DON in the resulting ash because it would burn better but that requires specific equipment “and there’s not a big market for pellets in Saskatchewan.”

In the anaerobic digestion trial, various combinations of low- and high-DON wheat, manure, digestate and water were mixed in vessels that were then placed in airtight, temperature-controlled incubators. Over the course of the 56-day trial, temperature and microbial activity were monitored. The results, however, showed inconsistent DON reduction using this method.

“The digestion method was not nearly as promising as we’d hoped,” says Agnew, “and the cost of the process is so much higher than the others that it’s probably not worth investigating further.”

The third and most successful disposal option turned out to be simple composting.

“We set up the trial in our own backyard where we have space, tractors and access to manure,” she says. Behind the PAMI facility, researchers created four compost piles, two made up of half cow manure and half low-DON wheat and two of manure and high-DON wheat. There were also two control piles of just manure for a total of six piles, each containing about 10 tonnes of material.

Agnew says each pile was tested at the start to ensure its moisture level was optimal for composting and water was added when necessary. The trial ran for 111 days over the summer and into the fall of 2016, and a front-end loader was used to turn the piles once a week for the first month. Each pile was maintained at an optimal moisture level and temperatures were monitored weekly to assess the effectiveness of the composting process.

And then the results arrived. Agnew says there were no detectable levels of DON in any of the compost samples tested in Winnipeg, which was an important finding but one she described as preliminary. She cautions that while composting deactivated the DON, the fusarium species that produced the toxin could still be present. In fact, additional toxins not found in the original wheat or manure samples were detected when the compost was tested after the trial.

Fusarium spores are tough, able to survive ultraviolet radiation and cold temperatures. There is some research suggesting heat treatment can eliminate the fusarium species but whether the heat and moisture of a compost pile can do the same remains to be determined. That means producers must still exercise caution when using the compost to avoid environmental contamination.

“All of the findings point to the need for further investigation,” she says. It will be important to determine if composting deactivates both the fusarium species and the DON toxin it produces, or if the species survives the process.

Agnew believes it is also worth exploring whether the microbial activity in compost that deactivates the toxins can be cultured and used to treat fusarium-infested soil. That research is beyond the scope of her project but “it could be a game-changer, a scientific way of cleansing the soil.”

In terms of the current work, “we still have the compost piles and we want to sample them at eight months, 12 months and 16 months to see if the DON is still gone and to measure the levels of other toxins. In the meantime, we’ll treat the piles like a farmer would treat his own compost – we’ll just let them sit.”

Agnew also hopes to repeat the compost study with new piles to validate the original findings, “and it may also be worthwhile investigating composting amendments other than manure.”

Composing is simple, says Agnew, and is a low-cost alternative to dumping that shows significant potential as a way to address a significant program. “A crop that is heavily infested is never going to be feed, even if it is composted to eliminate DON, but if the value of the resulting compost is relatively high and the cost to produce it relatively low, we’re hoping this might be a way for farmers to extract some benefit for their efforts.”

Meeting the Expectations of the Land