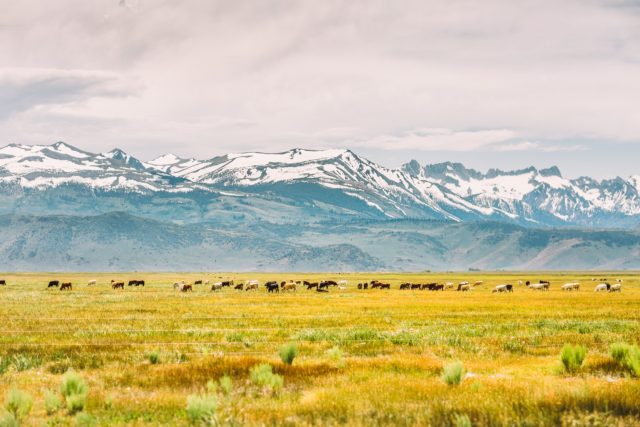 The language of Ecological Goods and Services

Farmers and ranchers are entering a new era in agriculture that comes with a new set of public expectations. For their grandparents it may have been enough to simply grow food upon the land the best way they could, but today’s producers hear increasingly that they should not only grow a lot of food but that they must do it without impairing the land’s capacity to store carbon, foster biodiversity, and protect the health of the soil and water. 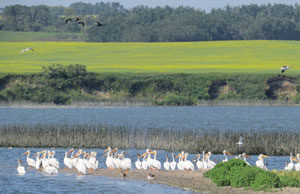 The producer who leaves a weedy corner of a field because the foxes once denned there, or a wetland where his father showed him the “slough-pump” bird (bittern) when he was a boy, has his own reasons for retaining natural spaces on his land. Among his yearly management decisions, these ones are different from most others, where there is generally an economic argument driving the plan. That difference makes it harder to explain a decision backed by non-monetary value, because agriculture, like any other form of business, runs on the logic of a balance sheet that does not have a line for “natural capital” or “ecological goods and services” (EG&S).

These additions to the language of agriculture are helping both producers and consumers to understand that, just as we all share an interest in food security and a strong farm economy, everyone benefits from clean water, healthy soils, flood control, carbon sequestration, aesthetics, and wildlife. By categorizing these ecological gifts from the land under the term EG&S, policy makers and producer groups are recognizing the economic reality that every value we care about needs to be assigned a price.

But assigning ecological services a price is tricky because some of them help modern producers and others are either neutral or a liability. In an article called “Reimagining Farms as Managed Ecosystems,” S.M. Swinton divides EG&S into those that producers and land managers will have a natural benefit from maintaining (e.g. soil organic matter or reduced erosion) and those that provide significant benefits to society but little to no direct benefits to farmers and land managers.

The first kind of EG&S, with direct benefits to the producer and society at large, provides an opening for agriculture ministries to encourage “best management practices” or BMPs. In Saskatchewan, for example, a federal-provincial Farm Stewardship Program protects and re-vegetates riparian areas in a cost-sharing model with farmers and ranchers. 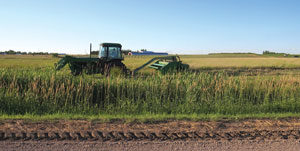 What about the second kind of EG&S, though—the ones that have a value to society but, from the economic perspective of the producer, have little or no value, or in some cases actually represent an opportunity cost or direct cost to maintain? When producers talk about EG&S, they will sometimes call the recipients of these benefits “free riders:” it could be the bobolink that needs hayfields to remain uncut well into July, the Greater Sage-Grouse that requires a different grazing regime for its breeding grounds, or the bird-watcher who wants to see them on the land.

Sean McGrath, a Lloydminster area rancher with pastures on both sides of the Saskatchewan/Alberta border, has received national awards for his innovative stewardship practices (see Feb/Mar 2014 FARMING FOR TOMORROW story featuring the McGrath ranch). He and an increasing number of producers across Canada are involved with EG&S projects run by an organization called Alternative Land Use Services (ALUS). ALUS began in 2006 and today is funded by municipal, provincial and federal government agencies, private foundations, angler and hunter groups, stewardship councils, and agricultural and environmental groups.

In a recent phone interview, Sean put the issues around EG&S into a wider perspective: “The environment is our common ground with everybody – whether it is a single mom with two kids in downtown Edmonton or a native group or some environmental organization. We may not agree on how to proceed but we can agree that there are issues.”

How to proceed is precisely where politics enter the equation. Conservation people are divided on EG&S. Critics say that if you monetize nature, you are attempting to justify it in the very terms that are destroying it. Farmers and ranchers, they argue, should not be paid to do something they should be doing anyway. Some point to failed projects and believe that, when you try to bring nature into the economy, especially with temporary payment programs, it becomes a commodity that will be liquidated or converted as soon as the payments stop.

However, there are many conservation groups now actively engaging with farmers and ranchers to launch EG&S payment projects such as ALUS or Ecological Services Initiative in British Columbia and Alberta. They agree that the best way to protect nature in a market economy is to assign it a dollar value and then somehow (that’s the tricky part) insert that value into the day to day economics of farming.

How to connect dollars to those who manage EG&S on agricultural land, however, is a question that has yet to be fully answered. Should governments increase regulation and use incentives and disincentives to provide producers with the right signals or do we leave it up to the marketplace and private organizations like ALUS to stimulate agricultural practices that will protect EG&S?

“It’s a tough one,” Sean says. “In some ways our culture is leaning politically the opposite way from any kind of government intervention. But as a producer, I am providing services that benefit the entire population. We all share the clean air – I think in the long run there will be some form of government intervention in the marketplace. It may look like carbon credits. It could be something like biodiversity offsets where oil and gas or any developer pays into a mitigation fund.

“One of the arguments is that people are already doing it and doing it for free. I know a lot of them and they are role models I look up to. But there is a large contingent getting rid of bush and sloughs and the reality is that the EG&S provided by shelterbelts and wetlands are disappearing faster than they are being created. If you run a 120 foot sprayer, and there’s a 60 foot shelter belt along the edge of your field, the economics say you knock down the trees. The obvious thing is to get rid of those trees – it’s not right or wrong, it just is.

“What we have to do is find a way to shift those economics a bit. If it’s a break-even prospect or even a small negative, lots of guys will take that step to improve their practices. The guy with the 120 foot sprayer, if you pay him something for those 60 feet he will leave them there. And if there is a monetary reward for retaining native grass, people will do it.

“I think we are going to figure this out, but it will take a combination of things. We need to educate the public so there should be some public dollars. That is how they do it in Europe – some public funding, some regulation, and a marketplace with carbon credits and biodiversity credits. Over time, some premium markets emerge. Whether it’s animal welfare or wildlife friendly, if that becomes the way the market goes then that becomes the lowest rung on the bar.”

While producers, conservation groups, and public policy makers develop programs and practices that help keep farm and ranch land healthy and diverse, a wholesale transformation of the agriculture industry to ecologically-sound management is a long way off. In fact, the more tangible rewards of working well with nature may never get beyond pilot projects and hit the mainstream unless we find a way for EG&S costs and benefits to appear on the financial statements of the corporations that distribute, process, and market the food grown on our farms and ranches.

Trevor Herriot is a Regina naturalist and writer. He appears bi-monthly on CBC Saskatchewan’s Blue Sky, answering questions about birds. He writes weekly in a blog about grassland conservation, called Grass Notes (trevorherriot.blogspot.ca). His fourth book, The Road is How: A Prairie Pilgrimage Through Nature, Desire, and Soul, was published by HarperCollins in April, 2014.

Meeting the Expectations of the Land