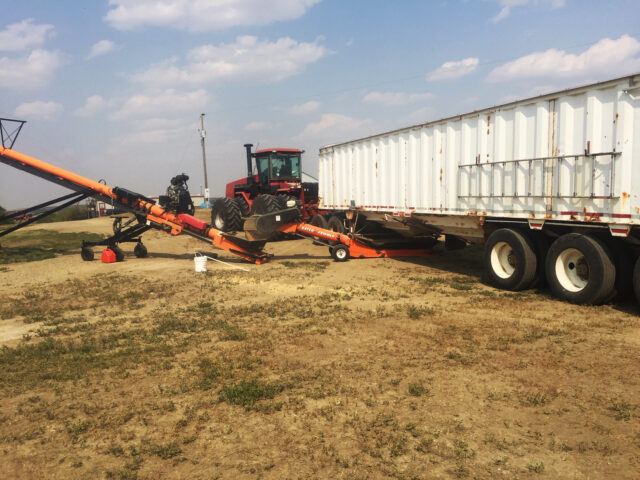 An ever-increasing carbon tax that hits $170 a tonne by 2030 is going to cost farmers a lot of money, but it will also have some unintended consequences. Year by year, it will make custom grain haulers less competitive as compared to farmers using their own trucks.

Farm diesel and gasoline are exempt from the carbon tax. The diesel used by custom truckers, however, is not. While the carbon tax is still relatively low, that isn’t such a big deal. As the tax rises, it’s going to be a competitive disadvantage in the custom trucking business.

An increasing number of farms run their own semis. During seeding, they are used for hauling seed and fertilizer to the field and during harvest they haul grain from the combine to storage. If you have a semi anyway, you may want to haul your own grain to market, particularly for the relatively short distance runs.

Many farmers like to haul their own grain so they can have more control of the schedule. In busy seasons or when a lot of grain needs to be moved in a short period of time or when loads are going a long distance to market, they can still hire a custom trucker.

Does it pay to truck your own grain to market? It depends who you ask. However, if you truthfully include all the costs involved, you might not be earning much for your time by running your own truck. Some farmers realize this, but continue trucking most of their own grain as a way to retain full-time employees during the winter and that’s certainly a valid approach.

For all the icy roads, snowstorms, -30 C temperatures, muddy yards and idiot drivers they have to contend with, custom truckers don’t exactly have a cushy lifestyle. Obviously, there has to be a certain return for efficient operators or they wouldn’t continue doing it, but returns are likely to become evermore meagre as the carbon tax goes skyward.

As custom trucking margins tighten, some will reconfigure their operations to move other products while others will simply exit the business. That has downsides that go beyond the custom truckers.

The farms least likely to run their own trucks are typically smaller with older operators. Farms growing a more specialized crop mix are also in this category.

Farms with a smaller acreage would typically like to avoid investing in a semi that has to meet all the safety requirements for highway travel. Older farmers that aren’t already licensed to drive a semi face a significant expense and a learning curve if they want to go that route.

And farms growing many of the specialty crops are often accessing buyers hundreds of kilometres away. These crops may have traditionally been priced FOB farm, but will that change when buyers have to pay the carbon tax on fuel for trucking?

I’m one of those smaller, older farmers and we mainly grow specialty crops. I have no desire to drive big trucks through cities. We have a couple of tandem grain trucks and a rusty old tridem trailer that we pull up and down the backroads with the seeding tractor. Virtually all of our grain is moved to market by custom truckers.

I’m not pleased to contemplate a time in the near future when my trucking cost per tonne will be higher than neighbours’ doing their own trucking. I also anticipate a time when it will be more difficult to access the services of custom grain haulers.

The theory behind a carbon tax or “a price on pollution” as the Liberal government likes to call it, is to encourage the adoption of greener technologies. Unfortunately, options today are limited for farmers trying to cut their fossil fuel consumption.

Many costs are difficult to exempt such as the carbon taxes paid by the railways and the increased costs of manufacturing fertilizer. Overall, farm costs will rise dramatically due to the carbon tax and there’s no way to pass those costs along when your commodities are priced in a world market.

The carbon tax on propane and natural gas for grain drying has received a lot of attention and those fuels for farm use should be exempt similar to farm gasoline and diesel.

Diesel for custom truckers moving grain and fertilizer should also be exempt. It makes no sense to disadvantage that service.