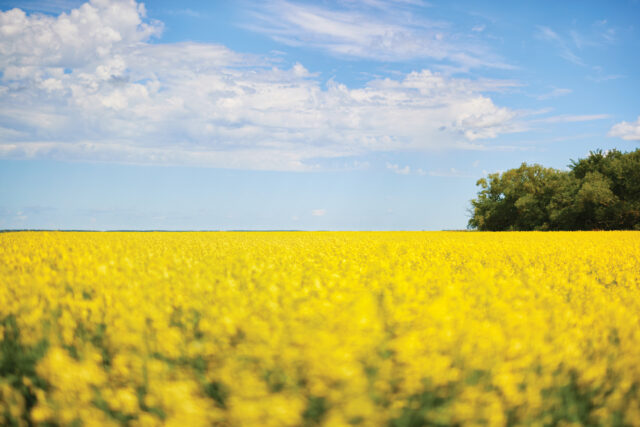 Prairie farmers live in a world where negativity dominates the headlines. To say 2019 and 2020 saw doom and gloom in ag-related news is an understatement, but exactly how dismal did it all play out? According to the experts, not so bad as first forecasted.

“The initial narrative that trade disruption into China was going to see grain sit in the bins here was very much not the case,” says Jonathon Driedger, senior marketing analyst with LeftField Commodity Research. “By the end of the 2019/20 crop year in August, we ended up exporting surprisingly more canola than people assumed when we consider where we were at in February of 2019 when those announcements first came out.”

Despite there being no proclamations or lifts on the Richardson and Viterra bans from getting canola into China, Neil Townsend, chief marketing analyst with FarmLink, says canola export numbers are improving. “Are they back to where they were prior to the political disagreement? No,” he says. “Fortunately for Canada there seems to be some expansion into [other markets] buying a little more from Canada.”

How large is China’s shadow?

“Going back to when the trade disruption flared up and during that window right after, we saw a sharp drop in prices, basis levels weakened and there was a big moment of uncertainty,” says Driedger. “Prices and markets initially responded accordingly and appropriately given that China was such an enormously important customer for Canadian canola exports.”

But despite the expectation that China would stop buying canola, their Canadian imports did not reach zero. “Although it was a fraction of the previous volumes, they continued to buy it,” says Driedger. “China still needed, or wanted, a certain amount canola, oil and meal.”

Then, as we moved into the “new normal” by March of 2020, China’s canola seed purchases began to pick up. “Let’s just say volumes have tended to roughly sit somewhere in between the old normal and the year immediately after the trade disruption,” says Driedger. “China’s been quietly buying more canola than people would have thought or assumed based on what the headlines were saying.”

Canadian canola exports were somewhat buffered through increased volumes moving into the United Arab Emirates (UAE). “They started to crush Canadian canola and send the oil into China,” says Driedger.

While this didn’t make up for China’s pre-disruption volume, the indirect movement through the UAE started to help. By August of 2020, the situation convalesced. “In aggregate, we actually saw record canola demand over the last year in total,” says Driedger. “A lot of the negativity around China and canola has quietened down a great deal despite nothing officially changing on the policy front.”

Finally, China was also recovering from the African Swine Fever during this period that had drastically reduced their number of hogs. “They’ve spent this whole year rebuilding their hog herd. That’s had positive impacts on feed demand in general across China,” says Townsend.

Agri-food supply chains and markets have become a very small world as globalization increases. What happens in any given area of the world can very well affect another and vice-versa.

“Markets are really good at efficiently allocating resources,” says Driedger. “In the case of Canadian canola, it suddenly became very cheap from a global perspective because there was a price response to the idea and expectation that China would not be buying any more. What ended up happening was more traction into some other markets.”

For one, Canadian canola volumes into Europe picked up. “Coming into August of 2019, one advantage we had despite the issues with China was the European market opening up for us,” says Townsend. “They’ve been gradually reducing their efforts and energy into producing canola. They’ve had a couple of consecutive smaller acreage bases and smaller yields.”

Europe doesn’t view canola as a human product, but they use the meal in feed. “Generally speaking, Europe tends to be feed-deficit meaning they need to import feed grain,” says Townsend. “Any feed grain produced in Europe already has a marketplace there for pigs, cattle and poultry.”

It’s also the main ingredient in their biodiesel protocols. “They started importing Canadian canola in volumes with crush oil going into their biodiesel and the meal into their feed industry. That helped us quite a bit,” says Townsend.

Then COVID-19 became real in March of 2020 and boosted canola oil demand. “Outside of the EU it’s considered a relatively premium oil around the world with some perceived health benefits,” says Townsend. “People cooking at home are choosing it more than some others that might be considered less healthful. Even in China during that period when everyone was staying home, there was some uptick in canola oil demand.”

Mother Nature also impacts markets. “On August 10th everything took another huge leg up when the Midwest derecho windstorm blew through Iowa and the U.S.,” says Townsend. “It altered the trajectory of what was set to be a possible record crop for corn and very sizable crop for soybeans. Since then, the soybeans futures chart has been straight up.”

Which brings up pulses over the last couple years.

“Pulses have had a more classical supply and demand story over this period. Supply has tightened up and demand stayed steady or improved,” says Townsend. “This has provided an upswing in prices, starting with a faltering crop in India last year. We’re still seeing the lingering impact of that.”

The pandemic amplified this scenario. “Many countries around the world had already reduced their lentil acreage for agronomic or pricing reasons,” he says. “Then we throw COVID on top of that, and pulses have really benefited from demand.”

India, the world’s biggest pulse consumer, began to ration out one kilogram of pulses per month by family for approximately 800 million people, says Townsend. “Right away there’s more demand while their stocks are low and they struggle to keep food in edible shape in storage.”

This situation saw positive support for prices on chickpeas, red and green lentils and even some peas while China’s demand for yellow peas as food, snacks, noodles and feed stayed strong.

On the grains and cereals front, feed demands remained strong including good barley prices during this time. “Oats have also had great trajectory with feed grain prices but also it’s an emerging winner in terms of what the woke people like to eat,” adds Townsend. “It’s the No. 1 non-dairy substitute right now.”

Other positives include more focus on pantry preparedness and home baking. Winners here include durum wheat as well as flour. “Nation states are also buying more of these because food security is such a giant issue and they can’t afford to have prices accelerate in these countries with people on subsisted living,” says Townsend.

For price-hungry farmers, analyst Driedger encourages agility to pounce on great deals. “The supply side of this equation is already determined when the crops come off and we know the size,” says Driedger. “Then demand takes over. Keep a close eye on what’s happening on that side.”

The changing world of risk