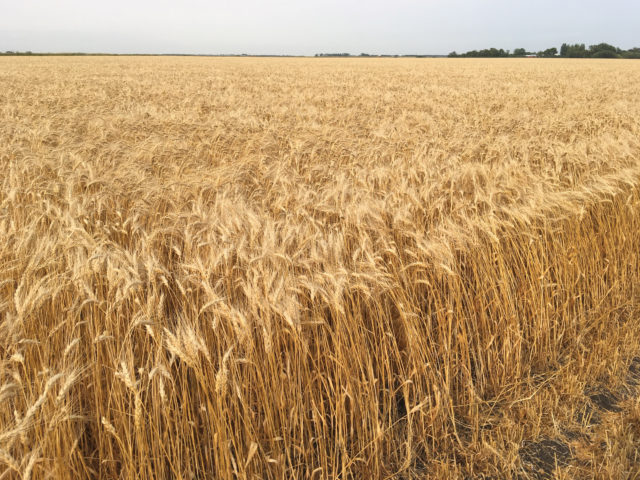 With August’s first-round execution of Canadian wheat re-classification, Prairie farmers have experienced varying degrees of frustration. From minimal impacts for those growing in the central time zone, to costly transitions for mountain time dwellers, there’s no question that with change comes uncertainty.

As a response to customer expressions of low gluten strength in some Canada Western Red Spring (CWRS) varieties, the Canadian Grain Commission (CGC) began the consultation and review process to modernize its classification system in 2015. As a result, 25 varieties from CWRS were deemed lower in gluten strength and downgraded. Included are highly utilized Lillian, Unity and Harvest, as well as four Canada Prairie Spring Red (CPSR) varieties, which were all moved into the new Canada Northern Hard Red (CNHR) and Canada Western Special Purpose (CWSP) classes.

However, there are differences of opinion across the industry as to whether the gluten issues are based purely upon genetics.

“There was concern about gluten strength in Canadian wheat back in 2013 with wet harvest conditions in some areas of the Prairies,” says Tom Steve, Alberta Wheat general manager. “There is some thought that these environmental conditions contributed to the problem.”

Steve says that environmental conditions, particularly moisture, can negatively impact gluten strength and that Alberta Wheat is not convinced by the CGC’s assertion that genetics in these varieties were the sole culprit in 2013’s gluten strength issues.

Furthermore, they’d like to see more economic and cost/benefit analyses conducted to consider the implications of moving premium varieties to lower-valued classes. “We don’t have any data that proves the re-classification has made a meaningful difference in our gluten strength profile. There’s also no evidence that varieties set for re-classification in three more years will make any difference,” says Steve.

He adds that concerns over gluten strength in Canadian wheat shipments have dissipated the last few years, despite the downgraded CWRS varieties—including widely popular Harvest as well as replacements Redwater and Muchmore, which are set to be downgraded in 2021—remaining in the system until the end of 2018.

“Yet, we’re not receiving any complaints about the gluten strength. The question we ask is ‘can the Grain Commission demonstrate that this re-classification process has made any difference in terms of customer satisfaction?’”

“International customers know what CWRS is and how it performs for them. It’s very important for us to maintain the consistency we’re known for,” says Cigi president JoAnne Buth. “Our wheat is known for its cleanliness. It is highly consistent and of premium quality. It’s that gluten strength and extensibility that customers are looking for.”

However, from 2011-2013 it became clear to Cigi, the CGC and some exporters that certain customers, particularly China and Japan, were experiencing varieties of Canadian wheat with lower gluten strength. With that, the issue was raised throughout the industry and Cereals Canada asked the CGC to examine the issue. The re-classification was a response to an industry request to look into the issues.

“We did some work looking at the different varieties in 2011 to 2012 in order to consider concerns about what was really happening. There were questions whether it was an environmental issue, within the varieties, agronomic practices and so on. The work we did clearly showed that the gluten strength issues were primarily with three varieties: Lillian, Harvest and Unity,” she says. “At that time these varieties made up about 23 per cent of the crop. With these three varieties with low gluten strength representing such a large portion of the crop, that’s why these customers were seeing these issues.”

Still, Buth assures Canadians that organizations like the CGC and Cigi exercise a strong commitment to science and fair consideration in variety registration and classification. In addition, there is a rigorous process to have varieties become registered and made available to farmers, which includes a review of its yield, disease resistance and other agronomic characteristics. “The Canadian system has two components focused on meeting customer needs—variety registration sets standards for varieties that breeders, both public and private, use to push for higher yields and to maintain quality. The next part of that system, in which Canada is known for its quality, is our classification system which is maintained by the CGC.”

Steve says farmers are getting mixed signals in terms of which varieties fit into that premium CWRS class. “We found producers out there who weren’t fully aware of the changes made August first with varieties moved into the lower-valued class,” he says. “It costs them money to switch, and it costs seed growers a tremendous amount of money when they can’t sell the stocks they’ve built up.”

The re-classifications had a much larger impact on Alberta farmers than in other regions of the Prairies because more farmers there grew a higher percentage of Harvest wheat, particularly suited to central Alberta’s darker, wetter soil. Foremost, a dominant CPS variety grown mostly in Alberta, was downgraded as well.

Since its re-classification into CNHR, Harvest acreage has significantly declined and has been largely replaced by CWRS varieties Redwater and Muchmore, which, like the varieties they replaced, offer shorter days to maturity and better standability, traits essential to Alberta’s conditions.

“The problem is, the Grain Commission has announced these varieties will also be cycled down to the CNHR class in 2021. Producers who switched will have to find yet another variety to suit their growing conditions,” says Steve.

Fred Greig, the Manitoba Wheat and Barley Growers Association chair, agrees with Steve on several points. “This whole process, I think, was to give producers as much access to the most varieties and options, but it’s created some uncertainty and more confusion for farmers.”

“Through luck of the draw, most Manitoba producers won’t be adversely affected as we’ve moved onto newer varieties just from a yield advantage,” says Greig, who also farms and runs Avondale Seeds near Reston. “I can sure sympathize with guys growing in that shorter season. This will hurt those guys for sure.”

He adds that this year’s early snowfall underlines the trouble Alberta farmers will face with losing their go-to early maturing varieties, and Manitoban farmers simply need better attributes in their varieties.

“We know we’re going to have Fusarium pressure, so we need a strong Fusarium package. The varieties we’ve evolved have better Fusarium tolerance, which is attractive to us,” he says. “Of course, standability, too. And then yield is always king.”

Big sellers for the region include CWRS Brandon and Elie, and for winter wheat, Emerson. The CPS varieties that were downgraded lacked good Fusarium packages, so were also of little concern.

Greig recalls learning about the modernization plans during Cigi’s Combine to Customer course in 2014. “This is where I first heard that the gluten strength in those varieties was the reason behind moving them out of that class,” he says. “There were 45 farmers from across Western Canada there. We left the meeting surprised, especially with Harvest being such a big variety for so many. Lots of guys said, ‘that’s it, we just can’t grow it anymore.’ Farmers can’t afford to lose the high-quality markets that pay better.”

Because of this, Avondale Seeds has removed those varieties from its portfolio, while farmers who expected a penalty on them had nearly three years to clear them from their systems. Greig says anyone who continues to grow these downgraded varieties should know selling at big companies like Cargill or Paterson Grain is no longer an option, but finding a niche market may work.

Each province has its own seed guide with independent data, and Greig suggests they also communicate with retailers and other farmers. “Before you plant, have a marketing plan in place so you’re sure you can get rid of it. And, if it doesn’t meet spec, know where it can go after that. If you’re not sure, talk to your local grain purchaser, and they’ll certainly let you know.”

As with any large industry spread across Canada’s distant borders, opinions differ, and compromise is a challenge. Steve says discussion in agriculture on regulation and change is always ongoing. “We’re happy to help facilitate that conversation by asking tough questions. Quality is our selling point for Canadian wheat. We differ in how this quality is measured. The Grain Commission has gone too far in determining the definition of quality on behalf of the industry. The industry needs to have a greater voice. This includes producers, exporters and end-use customers. We fundamentally would like to see a more market-based approach to determine quality parameters than what we have today.”