The business of farming is growing across the Prairies and so is the equipment required to take care of that business. This means farm buildings are getting bigger, higher, wider and longer. No matter what purpose the building will fulfill, farmers want room for growth, expansion and long-lasting quality, all with their next generations in mind.

“The farm building industry has changed over the years, because as size increases, more engineering is involved,” says Peter Vanderzwaag, sales manager at Calgary-based Remuda Building Ltd. “Farmers want something that will last into the next generation. The newer generation farmers transitioning into running the farm often see the old shop grandpa built back in the day, and it’s falling apart now. So, quality and structural integrity come up as considerations in addition to price.”

Today, the points to consider and ways to approach a new build are endless. For Innisfail-based and family-run Layden Farms, it was time to build an equipment storage shed that could shelter all the equipment used to farm their own 6,000 acres of barley, wheat, canola and peas, plus the 2,000 acres they custom farm for others. It’s an undertaking that requires more and increasingly larger equipment all the time.

“We have a couple older shops, but they were too small for our combines,” says fifth-generation farmer Ryan Layden. “They’re good for tractors and other things, but the combines have nearly doubled in size from what they used to be. We’d have to fold them up and just about rub the paint off them to get inside. We don’t want to be damaging equipment by squeezing it in.”

So, Layden, along with his father, uncle, cousin and the ladies of Layden Farms, hired Remuda Building to construct a cold storage equipment shed. The post-framed structure, built in 2016, is an impressive 80 feet wide, 200 feet long and 20 feet high, with a total height of 32 feet to the peak of the building. It has one 40-foot by 20-foot bi-fold door and a 30-foot by 20-foot sliding door on the opposite end.

South of Winnipeg, the Pitura family was outgrowing their existing seed cleaning facility, a Quonset built in 1956. In addition to the building, which had been modified several times over the years, the yard space had also become cramped, especially with trucks increasing in size from tandems to today’s B-trains.

The new facility, part of a larger expansion project, sits on a newly developed site on the Pitura family’s 4,000-acre farm. The building is a 90-foot by 90-foot by 40-foot pre-cast concrete structure. The panels and construction were provided by Broad Valley Redi-mix & Custom Precast, owned and operated by the Broad Valley Hutterite Colony, located 100 kilometres north of Winnipeg.

THE LAYDEN FAMILY: SHELTERING THEIR INVESTMENTS IN A BIG WAY

The Layden family currently owns three Case I-H 8230/40 combines that are replaced every one to three years and come with a big price tag. The new storage shed shelters these combines along with several other items including tractors, air drills, grain trucks and the water tank for their sprayer.

“If you compare the benefits of storing equipment inside against the cost of the equipment, there’s a big plus,” says Vanderzwaag. “You can potentially store $10 million worth of equipment in a $200,000 shop. The payoff comes all the way down to tires, hoses – anything rubber lasts longer, the paint doesn’t fade, and the equipment looks better for resale later on.”

With their minds set on getting their equipment out of central Alberta’s elements, the Laydens originally figured their new shop would need to be 80 feet by 160 feet. The workload that comes with farming 8,000 acres makes it tough to manage a project of that size. So, when they met Vanderzwaag and Remuda Building at the 2015 Agri-Trade Equipment Expo in Red Deer, Alberta, it was perfect timing.

“We had a really good experience meeting them,” says Layden. “They said they’d come out to do all the work and they gave us a good timeline right away. The pricing was clearly laid out and really fair, but for us, one of the biggest draws was the fact that they were not pushy on anything. They gave us options, but there was no pressure or rushed decision making for us.”

Aside from a local company that did some land work and prepared the pad, Remuda handled the entire build in just two weeks.

“We were delayed a week with heavy rain and couldn’t get on the pad, but as soon as they could, their guys showed up and got right to work on it,” says Layden. “They had a good team, really organized and knowledgeable.”

One of the best features is the shed’s massive bi-fold door. At the push of a button, it allows the Laydens roomy, convenient access. “In the older shops, we’d need two guys to slide the steel doors. This new one’s a little easier on the body,” he says. “Now we can drive our combines with 36-foot headers right in there, but these are only going to get bigger, and that’s something to think about. In hindsight, I’d maybe go wider to about 50 feet.”

He adds that going bigger than planned is a recommendation the family took from Remuda and would pass on to others.

“The extra room and not having everything so tight in there worked out because we’ve already got it pretty full. To be prepared for growth, I’d recommend going a little larger than you originally want. Making that decision has been a really good one for us.”

The Laydens have been using their shed for more than two years and have not experienced a single issue. Vanderzwaag says the building will require little maintenance outside of the bi-fold door, with even the exterior finish being rated for 40 years.

PITURA SEEDS: A CONCRETE PLAN WITH ROOM FOR EXPANSION

Tom Greaves, president and general manager at Pitura Seeds, along with his father-in-law Calvin Pitura, took a more hands-on approach to their expansion. They’ve planned, organized and overseen the construction of their new seed cleaning facility over the past year.

Development of the new yard site in preparation for the actual building construction began in late 2017, and they broke ground in April of this year. This process was a good learning experience for Greaves.

“A lot of investment, time and costs went into getting that site ready to build. This is something you absolutely want to do right because any shifting, moving or ruts around the building are never good for the future,” he says.

Originally, Greaves and Pitura looked into using a steel frame versus typically more expensive concrete. But once they broke things down, they soon determined there were savings to going with concrete they weren’t seeing with steel.

“Pricewise, this option was very comparable to a metal building at the end of the day,” says Greaves. “It’s a building that will last much longer and be more durable. The nice thing about concrete is if a forklift bumps into your wall, it doesn’t crumple like it does with tin.”

Other advantages to using concrete include the energy efficiency of the 12-inch wide precast and prestressed concrete panels insulated to R28. It also has a better fire resistance rating and the cement flooring even contains heating pipes.

The smooth texture of concrete walls is also an asset. “Everything collects dust in our business,” says Greaves. “We have these nice white urethane-painted walls. Any dust will cascade down for easy clean-up and maintenance, ensuring the highest quality for our staff and customers.”

In addition, the timing of the actual construction was a major bonus. The building was completed on time and everyone at Pitura Seeds is extremely impressed with the performance of Broad Valley.

Like the Laydens, the Pitura Seeds facility was built in two weeks; work crews averaged one 90-foot wall per day and the rafters, steel-trussed roof and tin work took about one more week. 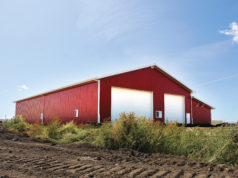