Home Uncategorized What is Delta T and why is it Important for Spraying? 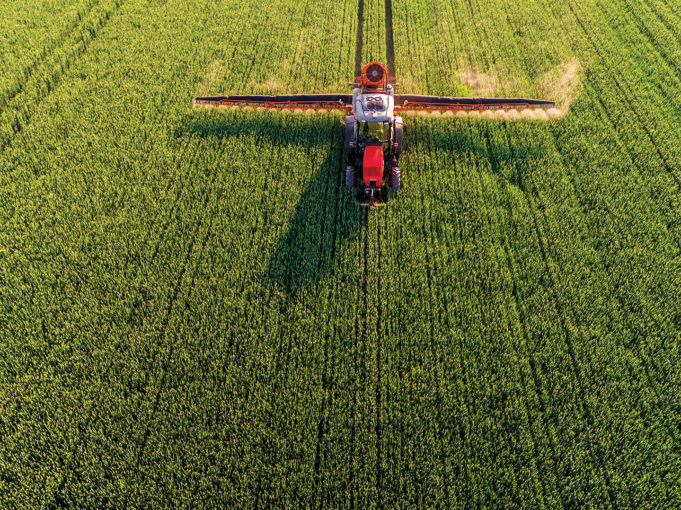 Delta T, also known as “wet bulb depression,” is an atmospheric moisture parameter whose use in spraying has made its way to North America from Australian operations. It is defined as the dry bulb temperature minus the wet bulb temperature, and provides an indication of water evaporation rate. Higher Delta T means faster water evaporation. With the average tank of pesticide being 90 to 99.5 per cent water, evaporation plays an important role in both droplet size and active ingredient concentration.

The recommendations from Australia are to avoid spraying when the Delta T is either too high or too low, with a range of two to eight being described as ideal.

In the early days of weather reporting, relative humidity was calculated from psychrometric charts. All one needed was a hygrometer, usually a sling psychrometer. A sling psychrometer is two identical thermometers side by side whose bulbs could be slung in a circle, exposing them to moving air. One bulb was covered in a cotton wick moistened with distilled water, the other was left exposed and dry.

On measuring the wet and dry bulb temperature, one consulted a psychrometric chart. This chart converted the two temperatures to total water content in the air, compared it to total water-holding capacity, and therefore expressed it as Relative Humidity (RH). Psychrometric charts are useful for many other air parameters such as dew point, vapour pressure, or enthalpy. (Pause briefly to give thanks that we don’t need to know what enthalpy is.)

Pros and Cons of Water Evaporation

It’s important to note that our Australian colleagues caution against spraying when water evaporation rate is both too high and too low.

The addition of this parameter to our spraying weather lexicon has been useful, but it’s important to understand the context in which it was developed to properly judge its suitability.

Aussies started talking about Delta T because the use of finer sprays under the hot dry conditions found during their summer sprays resulted in significant evaporative losses, significantly greater drift potential, and potential reduction of product performance. The guidelines to avoid spraying when Delta T exceeds eight or ten originate there.

A few changes have happened since these guidelines were developed. Over the past 10 to 20 years, we’ve observed greater use of low-drift sprays, with the coarser sprays’ larger droplets resisting fast evaporation. In the past five to 10 years, water volumes have increased due to our heavier reliance on fungicides, desiccants, and contact modes of action. These developments have helped reduce the impact of a dry atmosphere. We simply can’t say if a Delta T of 10 is too high with these new application methods.

Looking at it another way, if Delta T values are very high, increasing water volume and droplet size will mitigate that to some degree, as the Aussies state in their extension materials.

Pesticide formulation can also play a role in evaporation. Once the water is gone, oily formulations may still have good uptake because the oily active ingredient stays dissolved. This is both good and bad, helping on-target efficacy but also increasing the risk of more potent drift. Solutions, on the other hand, are more likely to leave their actives stranded on leaves once the water is gone.

Delta T is definitely useful information when spraying. It will typically rise and fall with air temperature as the day proceeds, and it is wise to consider suspending operations when values are critical. The cautions associated with it may not apply to western Canada due to our spraying practices.

Take note of the Delta T when spraying the same product throughout these hot days and learn from the experience. Remember, the atmosphere affects not just sprays but also plants and insects, and due to this complexity, we may not be able to attribute success or failure to just one measurement.