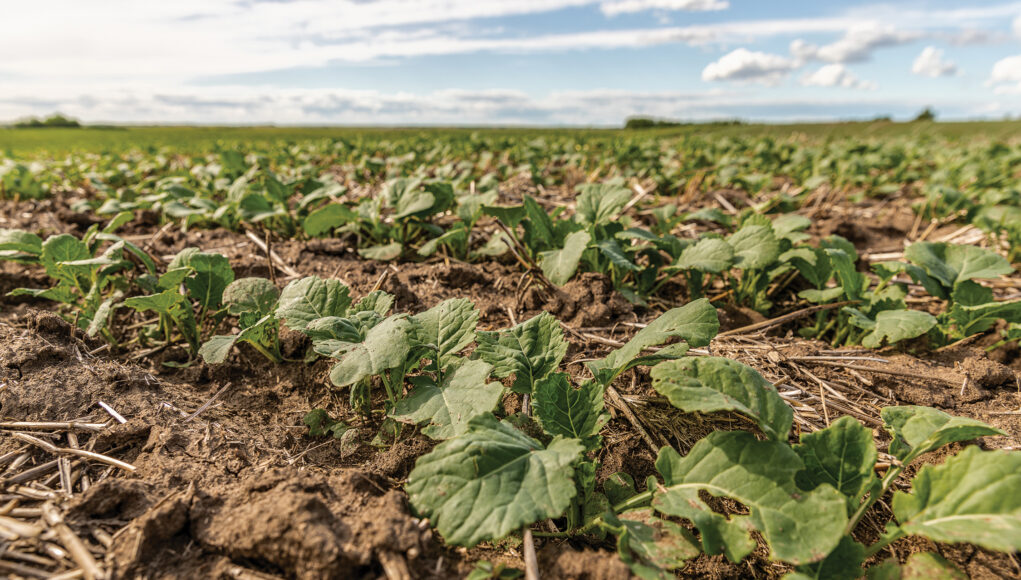 If one thing is true about farming, it is not for the faint of heart. Numerous strengths are required to be a successful grower – problem-solving, farm management and organization, patience and perseverance, analytical and technological skills. Farmers play an essential role in changing the agriculture landscape for the better.

Still, much of a crop’s success is dependent upon climate and market access issues. For Canadian canola growers, the 2021 growing season was one of the most difficult on record.

“The Prairie-wide drought of 2021 resulted in the biggest drop in Canadian canola production in more than a decade. Average yields fell to 25 bushels per acre with total production of 12.6 million metric tons,” he says. “This led to a rationing of sales to export markets and very low ending stocks.”

SaskCanola invests in research to improve profitability of canola and ensure the long-term sustainability of Saskatchewan canola farmers. After last year’s drought, executive director Tracy Broughton says current conditions vary significantly from region to region in Saskatchewan since the province is so large. While some areas remain dry, overall the province has experienced significantly more rainfall than this time last year which has been very helpful to improve soil moisture levels.

In mid-summer, the crop was off to a later start thanks to cooler than average temperatures. “In addition to the lack of rainfall last year, there were very hot temperatures during the flowering period, which had a negative impact on yields,” says Broughton, adding that in the case of milder July temperatures, farmers in regions of adequate rainfall should be optimistic about the 2022 crop.

Chuck Fossay, Manitoba grower and board member with Manitoba Canola Growers and CCC, says last year’s drought affected producers in many different ways. For producers who received some timely rains, the drought had only a minor impact on production.

“However, for those who were not lucky with timely rains, it was devastating because many producers had little-to-no canola to harvest,” he says. “The very wet spring this year in Manitoba and in parts of Saskatchewan probably had a greater impact on producers and the acres seeded to canola. We estimate that only 93 per cent of Manitoba’s total arable acres were planted. This no doubt will impact the total acres seeded to canola in Manitoba.”

Fossay was awaiting the crop insurance seeded acreage report to know the full effects. He says after seeding, some farmers had to spray their canola fields for flea beetles up to four times. “Some fields have been reseeded due to excess moisture or have simply drowned out. We’ll need to wait to see how much canola actually is harvested. But canola does have the ability some years to rebound and recover from a poor start.”

This dispute lasted three years, with positive news finally arriving in May 2022 when China reinstated access for Richardson and Viterra to export canola seed to China. Throughout this dispute, CCC worked very closely with Government of Canada officials to encourage a return to rules-based predictable trade, and ensure all Canadian exporters are treated equally by the Chinese administration.

“We had a case study completed that estimated this trade restriction has cost the industry between $1.54 and $2.35 billion from lost sales and lower prices between March 2019 and August 2020,” says Everson.

What’s Next for Growers?

There is some good news in that new biofuel regulations are presenting a new market opportunity for canola oil to be part of a low carbon fuel.

To address global climate change, Everson says more countries are introducing renewable fuel mandates to reduce greenhouse gas emissions, with Canada and the U.S. among them. This is an important opportunity for the industry because canola-based biofuels have among the lowest carbon footprints in the world, reducing lifecycle greenhouse gas (GHG) emissions by up to 90 per cent compared to fossil diesel.

This is largely because Canadian growers have such a strong track record of sustainable production practices. In addition to the environmental benefits, canola-based biofuels help diversify market opportunities for canola growers and mean more jobs and investment in value added processing.

“With this expansion, we see an opportunity for canola to continue to service the demand in the food market, and increased demand to come from the fuel market,” says Broughton.

Fossay predicts Western Canadian farmers will seed somewhere around 22 million more acres of canola. “Canola prices were attractive all winter and into the spring planting season,” he says. “While the futures price has gone down since early June, prices are still very attractive and, despite high input costs, farmers should be able to make profitable sales of canola with average yields. So, overall if there are no unforeseen events, canola producers should do well this year.”

Every year seed companies come out with new varieties of canola that have potentially higher yields, better disease resistance, better pod shatter resistance or some other trait, says Fossay.

“I cannot comment specifically on these new varieties but by early fall, producers will be told about these varieties and will have to make their selections,” says Fossay. “As for products, there are some new seed treatments in the pipeline to be released later this year or next spring that will provide better disease and insect protection for canola.”

Meanwhile, the federal government’s target to reduce fertilizer emissions by 30 per cent by 2030 is an important issue. Ensuring canola farmers have access to nitrogen fertilizer plays a role in that canola production and meeting the goal to sustainably increase yields.

“Canadian canola farmers have been and continue to be strong adopters of management practices and technology that contribute to environmentally sustainable production, such as conservation till, pod shatter tolerant seed varieties, precision ag technologies and 4R Nutrient Stewardship practices,” says Everson. “Moving forward, continued adoption and advancement of 4R practices is an important opportunity to improve fertilizer efficiency, which is good for both farm productivity and our environment.”

In 2014, CCC released its strategic plan, “Keep it Coming,” to achieve an ambitious yield of 52 bushels per acre to meet a global market demand of 26 million metric tons by 2025. To reach this goal, the industry is focusing on three strategic priorities: a sustainable and reliable supply; differentiated value; and, stable and open trade.

Asked if many of these targets are within reach by 2025 – including exported seed and domestic processing – Everson says the country’s seed exports in 2020 came close to the 2025 target at a record 11.8 million metric tons.

“The fundamentals of global demand for Canadian canola are in our favour and our industry continues to be focused on growing the supply of canola to meet this market demand in a sustainable, profitable way,” says Everson, adding steady growth in domestic processing exceeded 10 million metric tons in 2020 and should processing capacity utilization sit at 90 per cent, 15 million annual metric tonnes of Canadian canola will be processed by 2025. “The four major announcements in 2021 and early 2022 to increase canola processing capacity in Saskatchewan are well aligned with this strategic plan.”