Home Uncategorized Return of the Soybean 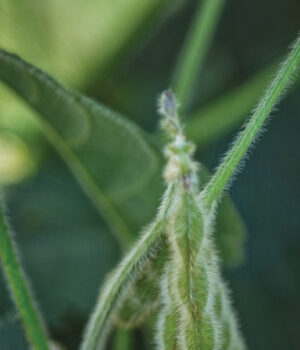 Planted soybean acres on the Prairies may have taken it on the chin a little bit this year.

Brendan Phillips of Grand Bend Farms in Hartney, Man., has reduced the number of soybeans in his crop rotation in recent years and he’s not alone. The soybean situation on the Prairies, which flourished between 2014 and 2017, has taken a step back in recent years, primarily due to dry conditions and high prices for other crops.

Statistics Canada says soybean production in Manitoba dropped 17 per cent last year, despite a 14 per cent increase in harvested acres. The lack of yield is blamed on drought, a large reason fewer acres are out there this year. “With the drier conditions over the past two or three years, it has kind of reduced yields to the point where it became a less important part of our rotation,” says Phillips, who also sits as a director for Manitoba Pulse and Soybean Growers (MPSG).

He is quick to point out his family always maintains a certain percentage of acres because it helps with risk management and will continue to do so moving forward. Also in his rotation are canola, wheat, corn and sometimes peas.

It was a very different story when Phillips got into the crop in 2012, coming off years of excess moisture. “We were looking for a crop that could better handle excess moisture compared to canola and other crops we used at that time,” he says.

Potts agrees the decrease in soybean planting has to do with the amount of precipitation farmers have seen in the latter stages of the growing season. “We’ve had some dry finishes to the season over the last couple of years and soybeans, in Saskatchewan at least, need rain in late July and August, so that’s been a big challenge for soybean acres,” he says.

At the same time, there have been good prices for wheat, canola and lentils, while oats, flax and barley have offered farmers a lower risk than soybeans, which are on the edge of adaptation in Saskatchewan. Meanwhile, in Southeast Alberta, Tracy Hemsing is growing soybeans for the first time. The Rolling Hills area farmer says it was a last-minute decision when he could not plant canola and was looking for a crop that was lighter on fertilizer, particularly nitrogen, with current prices.

Hemsing, who also grows silage corn, canola, wheat and barley, has been pleasantly surprised with the crop. “I think they’re a relatively easy crop once you get your spray down. There’s a possibility of needing a fungicide, but it’s not always necessary on them,” he says.

Producers in the province don’t typically have much for soybean acres, which is also reflected in the County of Newell, where farmers have irrigation from the Eastern Irrigation District. However, Hemsing believes that may be changing as there are several producers in the region who have it or tried them at one point or another. “There are more than I thought there were, actually, it seems like it’s a crop that’s trying to get a foothold.”

One resounding message Potts, Hemsing and Phillips all share is that once the crop is harvested, it’s easy getting to market. There is a significant global market for soybeans, and since Canada is a significant exporter, logistics are in place to get it to Vancouver to be exported to Asia. China, in particular, is a massive buyer of soybeans.

If there’s one area Potts would like to see improve, it is more domestic crush capacity. “The pulse plants that have been announced or built on the prairies really deal with pulses only, so we’re dealing with peas, maybe to a lesser degree faba beans and lentils, but not soybeans,” he says, adding soybeans must be processed at an oil seed crushing facility more than a fractionation of flower facility that deals with peas and lentils.

One of the best things about growing the crop is the opportunities at farmers’ fingertips to move it to market once it comes off the field, says Phillips. “There seem to be reliable movement opportunities off the combine, so we generally utilize soybeans to improve our cash flow in the fall as well as it seems easy to market.”

Phillips generally markets upwards of 75 per cent of the beans straight to the elevator and stores the remaining 25 per cent. There are generally no off-spec issues to worry about.

Despite not having a dedicated large-scale crush plant in Manitoba, smaller processors that crush beans for animal feed to service the large animal protein segment have created demand.

Hemsing doesn’t have quite the options as those in Manitoba or Saskatchewan. He points to a buyer in the central Alberta town of Three Hills, where his crop will probably end up after it comes off the field.

As for genetics, farmers are looking for varieties that mature sooner to correspond with the short growing season across the prairies. Producers’ struggles with the lack of precipitation in recent years have them looking for varieties that will better weather drought, allowing them to achieve good yields. “To be able to produce the yields that farmers would expect to keep them in the rotation [is] quite important,” says Potts.

For Phillips, genetic improvements making soybeans better suited for the Prairies was a key reason they got into their crop on his farm. “The herbicide systems were better suited for our cropping location,” he says, adding he would also like to see more advancements with the varieties to adapt to short-term drought, which his farm often sees in July and August, as well as to the shorter growing season. “As well, [we’re] looking forward to new chemical traits like the Enlist E Three system that will kind of open up options for dealing with Roundup Ready resistant weeds a little bit better for our farm.”

Alberta Pulse Growers, SPG and MPSG coordinate regional soybean variety trials in partnership with seed companies, post-secondary institutions and other stakeholders, making the information available to farmers on their respective websites. This allows producers to evaluate the different locations and get information about similar growing conditions as they have on their farm.

In the meantime, Hemsing leaned on the advice of his seed provider to select a variety that was Round-Up ready, and that has worked out well. He looks forward to next year when he can go into the field and grow corn or possibly canola and see the impact of soybeans on the soil’s health. “We need these pulses in our rotation to help make our soils more sustainable,” he says.

Despite the recent decline in acres of soybeans, Potts still views the crop as an essential option for Saskatchewan producers seeking additional nitrogen-fixing crop in the rotation.

Phillips is also optimistic, pointing to the excess moisture in his region this year, which should mean a good harvest. “It wouldn’t surprise me to see a rebound in acres in Manitoba next year.”