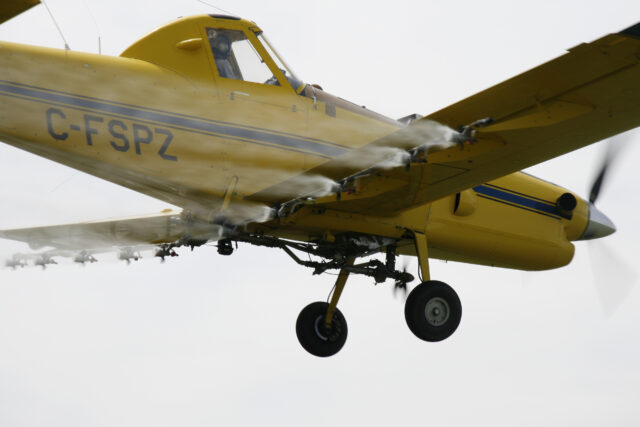 Sprayers have changed a lot over the past 25 years. They have become larger, with more tank capacity, boom width, and, if self-propelled, horsepower. They are more comfortable and ergonomic, with more sophisticated swath control and guidance systems. However, every year, a very important deficiency in their design becomes obvious: drift control.

The changes described above are intended to improve productivity and fight operator fatigue. Today’s sprayer can cover more ground than ever before. Although the demand to cover ground, through a combination of growth in farm size and frequency of treatment, has outpaced machine productivity. As a result, operators find themselves ever further in a time deficit, with acres on the to-do list and no time to get the work done.

Spray drift remains the single-most limiting factor to the safe application of pesticides. Spraying cannot happen when it’s too windy. It has been an issue since spraying began. Simply put, pesticides belong in one place only, and that is on the treated swath. Applicators have certain tools to make this happen, such as using coarser sprays, lowering the booms and choosing very specific weather conditions. When winds are incessant, crops and pests are quickly growing out of the treatable stages, what is an applicator to do? There is only one thing they can do: lower their standards. Either miss the treatment and suffer the yield loss or spray in the wind and hope nothing bad happens.

Neither of these options are acceptable.

There isn’t an easy fix. Spraying is a game of tight margins. The spray liquid in the tank must be atomized in droplets that can make their way to the target and provide adequate coverage when they get there. The total liquid volume to achieve that task also must be practical. The global ag industry has determined, over the past 100 years, that about 100 L/ha, 10 gallons (37.85 L) per acre, is the ballpark amount that allows reasonable work rates with sprays that are just coarse enough to resist displacement in modest winds. If it gets windier and we need even coarser sprays, we need to add much more water to maintain an acceptable droplet density on the targets. Of course, the droplets need to stick to those targets, so there is a limit how coarse we can spray.

We’ve been asking the low-drift nozzle to do the heavy lifting in drift management, and with a return to more contact modes of action for resistance management, there’s a limit to how much we can achieve with that approach before coverage and product performance go south.

Agriculture needs a drift-reducing technology that is better than the low-drift nozzle. We need a technology that maintains a practical water volume limit and combines this with intermediate spray qualities that generate good pesticide efficacy without allowing drift under windy conditions.

To create value for farmers you first need to understand their problems. Getting the spraying job completed on time often means squeezing the spray job into ever narrower time frame, between rains, between winds and inversions, between too much dew and too dry, between too early and too late. I look forward to the day when engineering resources are allocated to address these issues better, protecting both the environment and the stress levels on the farm.