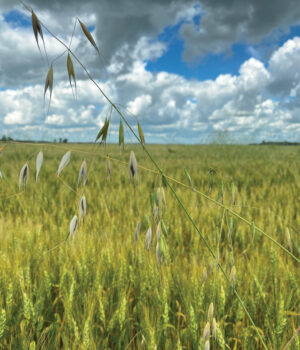 It has been more than 30 years since wild oat herbicide resistance was first confirmed in the Canadian Prairies. In 1989, Group 8 resistance to triallate (Avadex) and difenzoquat (Avenge) was discovered in Alberta. Just one year later, Group 1 resistant wild oat was found in Saskatchewan and Manitoba. Even before that, a Wild Oat Action Committee had been tasked with stopping the “Great Grain Robber” in its tracks. Wild oat can be a huge yield robber, when they emerge earlier than the crop, wild oat can rob up to 70 to 80 per cent of the yield, and that does not factor in the economics of future weed issues and dockage and grade downgrades.

Even with three decades of research and education, wild oats continue to be in the top five weeds in the Prairiewide Agriculture and Agri-Food (AAFC) weed surveys that have been conducted since the 1970s. Shifts in tillage patterns, new herbicide tolerance traits in crops and herbicide rotation have done little to prevent wild oats from flourishing. And thus, a new committee, the Resistant Wild Oat Action Committee has been established to “engage scientists, producers and the agriculture industry to advance the technology and management available to producers to address herbicide resistance on their farms.”

The levels of herbicide-resistant wild oat have been widely documented.  The snapshots provided by weed surveys are likely an under-reporting of resistance levels, because random samples will never catch every resistant weed. Based on weed resistance reporting for the Canadian Prairies summarized in the Weed Technology journal in 2008, of 1,067 wild oat seed samples submitted by farmers and industry for testing between 1996 and 2006, 725 samples had Group 1 herbicide resistance (HR), 34 samples were Group 2 HR and 55 samples possessed groups 1 and 2 HR. In more recent studies, across the prairies 69 per cent of wild oat populations have some level of herbicide resistance, with Manitoba leading the way at 79 per cent of the wild oat samples being positive.

First, field populations are more diverse than the samples submitted for testing. A sample is typically collected after a product has failed to provide control of the wild oat. The sample is biased towards the resistant biotype in the field, if the patch is indeed due to herbicide resistance rather than application problems or successive flushes of wild oat. It may be surprising that there is any level of susceptible wild oat in a resistant sample, but there typically is variation.

Second, since the seed bank is not part of the resistance testing, the level of control in the field should be better than the testing. Presumably, there are susceptible seeds in the seed bank, but that is not easily measured or estimated. Those susceptible seeds contribute to confusion because when a farmer uses a herbicide that the wild oat population has tested to be resistant, there is a certain level of effectiveness. No, the population has not lost its resistance, there is just a mixed population and using that herbicide is simply getting rid of any susceptible wild oats.

Wild oat is a hexaploid. By contrast, humans are diploids, as in two sets of chromosomes, which seems complicated enough, but hexaploids have six sets of chromosomes. Hexaploidy results in a more complicated expression of genetic material and then add in that the resistance genes aren’t just a simple yes/no to being resistant, they are shades of resistant (R or r) and susceptible (S). Target-site resistance for Group 1 resistance in wild oat involves three copies of a gene and there are at least seven different mutations of that gene which provide varying levels of resistance to the three sub-families of the Group 1 herbicides (summarized in the table). There can be more than one mutation of the gene within the wild oat plant, so there are several possible cross-resistance patterns. In addition, there is non-target site resistance in some wild oat populations. What I’m trying to say is that with all of this complexity, there isn’t one simple test that can provide all of the answers to Group 1 resistance in wild oat. That doesn’t begin to describe Group 2 resistance mechanisms or any of the other herbicides.

Management strategies have included utilizing a diverse crop rotation, rotating herbicides and enhancing crop competitiveness through adjusting seeding dates and rates as well as variety selection. More recently, recommendations for herbicide resistance management have focused on using multiple modes of effective action and herbicide layering. While herbicide-tolerant crops have added certain options for in-crop herbicides, managing Group 1 HR wild oat has seen a shift to increased use of Group 2 herbicides, which has resulted in a corresponding jump in Group 2 resistance. With Group 1 and 2 HR wild oat, there is no in-crop option to spray for wild oat control in wheat and barley.  The options for previously “easy” broadleaf crops such as canola and soybean become limited.

We continue to rely on herbicides because they are cost effective and reliable but those options are steadily decreasing and results are less reliable. Wild oats have been confirmed to be resistant to Group 1, 2, 8, 14, 15 and 25 in Canada and in Australia. Group 9 resistance has also been documented. Alternatives such as patch management, harvest weed seed destruction and altering seed dates are barely being utilized. However, not due to a lack of effectiveness, one study showed that a patch of wild oats could increase by 330 per cent in six years if not treated, but when seed shed was prevented, the patch footprint only increased by 35 per cent. We need to implement these alternative strategies for minimizing the impact of the Great Grain Robber. The Resistant Wild Oat Action Committee will be asking farmers about what tools they need to manage these issues. It’s time to work with these types of committees, so that effective tools are developed and more importantly utilized.