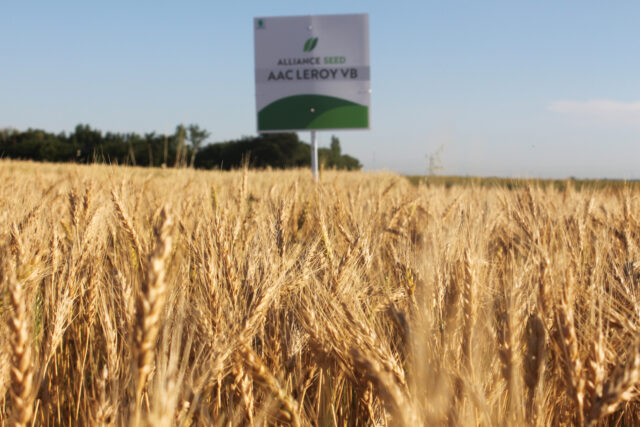 Harvest is a wrap, but it’s no time to rest. Winning the grain game means already looking ahead to spring. As farmers begin to preview the star players for spring seeding 2021, they’ll need to ensure each one they select has the full package. Of course, their first concern is yield.

Alliance Seed general manager Jim Bagshaw says maximizing yield on the farm is a two-fold approach: offence—genetics and inputs; and defence—how farmers protect it from pests, disease and other yield robbers that might knock it down.

When looking at 2021 for oats, wheat or canola, these three new varieties hold great potential.

Compared to other varieties available on the market, Arborg has strong straw, contributing to its excellent standability. Additional highlights are its good disease resistance and early maturity.

That early maturity is a big asset today and the reason is two-fold. First, given the last couple years’ challenging weather at harvest, getting that grain in the bin early is essential to preserving its quality. Second, it plays a role in helping the product rise above ongoing consumer-driven glyphosate issues, while still maintaining its high-end yield.

In addition to overcoming weather and regulatory challenges, Arborg does well anywhere, it seems. “It really has performed well from the Red River Valley in Manitoba to the Peace River Valley in Alberta,” says Herman. “We’ve had strong yield reports coming in from all three Prairie provinces.”

In terms of market opportunities, this variety comes at a time when the big picture for oats and their end-use is optimistic. “There’s lots of buzz around the “healthy choice” and beta-glucan,” explains Herman. “Arborg has a higher percentage of beta-glucan than what’s out there.”

As the popularity of “healthy choice” products, including breakfast cereals, is rising there’s also an increase in oat milk demand as a non-dairy alternative. Starbucks has even announced adding an “oat beverage” to its menu this fall. “[Arborg] is a big deal for millers. It has strong specs and their feedback has been phenomenal,” says Herman.

Arborg’s return on investment comes back to its yield, Herman says, adding that it’s been one of the top yielding varieties across Western Canada so far. While 2020 will be the first year for farmers to see the variety perform on the larger scale, FP Genetics has observed it the last few years as seed growers prepared for sales. “CDC Arborg being a strong variety for western Canada is certainly not a surprise for us,” he adds.

Herman says 2020 was a strong sales year for Arbord and he expects the trend to continue into 2021.

“It’s a great fit for farmers and I would say to them ‘if you’re not growing it, you need to give it a try,’” he says.

Alliance Seed expects this variety, available to farmers for the first time in spring 2021, to take yield for CWRS to a whole new level. “There’s a lot of good characteristics and traits in it, but the yield is what most growers look for,” says Bagshaw.

In addition to that substantially higher yield, LeRoy has the other qualities farmers want including disease resistance, standability, maturity, and all those attributes that contribute to, and protect, the yield. “It’s a well-rounded product that is a significant jump above what’s on the market now,” says Bagshaw.

Although as a varietal blend LeRoy is a midge-tolerant wheat, farmers should not discount it, as it’s an exceptionally high yielding option for nearly every region across Western Canada.

“Midge-tolerant wheat varieties have been on the market for approximately 10 years now, and many of [them] have been segmented into those areas where the midge fly was a problem,” says Bagshaw. “This variety is so good in yield; people are going to grow it everywhere whether they have midge or not.”

LeRoy is rated moderately resistant (MR) for Fusarium head blight (FHB) as well as stem, leaf and stripe rust. “It’s got one of the strongest disease resistant packages out there so it can withstand disease and reach up much higher to its full potential,” says Bagshaw.

Categorized as a semi-dwarf, LeRoy’s mid-height gives it stronger standability and higher bushels per acre without lodging issues. It’s on the early side of mid-range maturity so other than late seeding or short seasons, it’s a good fit. “From the Red River Valley up to Swan River Valley, up to the Peace River Valley … maturity-wise, it fits 90 per cent of growing areas in all three Prairie provinces,” says Bagshaw.

Alliance Seed has seen better weathering characteristics in LeRoy than many varieties during seed production. “So, in a year like 2019 with lots of rain, snow and bad weather on the crop before harvest, Leroy came through looking remarkably well compared to most,” says Bagshaw. “It holds its grade and quality characteristics well. There will be marketing opportunities with every grain buyer who buys CWRS.”

In its three years of registration trials, LeRoy yields were 11 per cent higher than AAC Viewfield, 13 per cent higher than Carberry and 10 per cent more than Unity VB. “It’s not just a little bit better, it’s significantly better,” says Bagshaw. “Based on its yield advantage, the ROI will pencil out very well. If you average 40 bushels an acre of wheat in your area, an extra 10 per cent is an extra four bushels per acre. That adds up pretty quick on a large farm.

“Growers looking to maximize their bottom line need to maximize the revenue they bring in. The yield potential of this variety will do it. And that strong agronomic and disease resistance package helps simplify a grower’s life.”