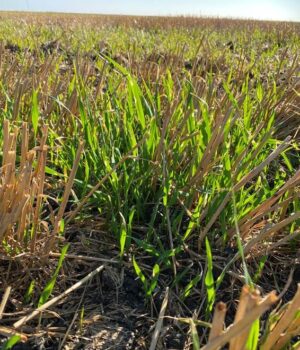 “How do you spray out volunteer wheat in barley?” You don’t. And to be honest there isn’t a surefire way to hurt volunteer barley enough in wheat to prevent it from being a contaminant or a negative impact on yield. “What is the best option for volunteer canola control in conventional sunflowers?” Assert, but only if it is applied early to minimize potential for crop injury. “How late can I apply a post-seed yet pre-emerge product because I now see a flush of volunteers and the crop has not emerged yet?” Sorry, there is no magic solution. Follow the herbicide label to avoid damaging the crop. These were three very common and almost impossible questions in 2020 and my crystal ball is anticipating more tough questions in 2021.

Two of our most frequently grown crops ranked high in the most recent Agriculture and Agri-Food Canada weed surveys. Overall, volunteer canola was No. 4 and volunteer wheat was No. 10. This marks a significant jump in the rankings for relative abundance of volunteer canola in western Canadian fields. In Alberta, volunteer canola was No. 6 moving up from 16th spot in 2001, in Saskatchewan No. 4, up from 16th in 2003 and in Manitoba, reaching No. 5 up from 10th in 2002. Rob Gulden at the University of Manitoba did a two-year study and found that the average yield losses of canola in Saskatchewan were 5.9 per cent of yield. So, let’s imagine a a 30 bushel/acre canola crop, resulting in 1.8 bushels/acre of loss with a standard bushel weight of 50 pounds, that’s 90 pounds of canola seed on the ground. That’s approximately 18 times the typical seeding rate for canola.

It’s easy to pick on canola, because there has been a considerable amount of research on that topic, and harvest conditions can result in significant crop loss no matter which crop. High winds, disease, grasshoppers clipping heads, lodging and combine settings are just a few of the factors that impact crop losses. And every fall has different challenges. Too windy and dry in the fall of 2020 is a stark contrast to the miserable cold, wet fall of 2019, which resulted in volunteer corn being more evident in fields in 2020. This varies from area to area; when it’s too wet in one spot, someone else is struggling because it’s too dry.

The seedling vigour, crop competitiveness and herbicide-tolerant traits that were so attractive as a crop, are now the arch-nemesis of future crops. The volunteers will usually get a head start on any crop because as soon as there is enough warmth and moisture, those non-dormant seeds germinate. Federal research by Dr. John O’Donovan has shown that volunteer barley is more competitive than wild oats in wheat. Just 10 volunteer barley plants per square metre can reduce wheat yield by more than 12 per cent. Not only do volunteer crops reduce yield, they can harbour disease and insects, dry out seedbeds, or choke out the crop as it tries to emerge. There are several tools in your arsenal to battle the volunteer crops that will reduce the number of impossible questions you have to face.

The troublesome thing about a volunteer crop is that the seeds tend to all germinate within the first year or two and can form a thick mat of crop competition. But that is also the fortunate thing about a volunteer crop, since unlike most weed seeds, there is little or no dormancy in the seed. Once again, Gulden looked at this and found that a tillage pass with a tine harrow set to a half-inch depth (low disturbance) was effective at encouraging early fall and spring emergence of volunteer canola. His studies determined that early fall soil disturbance, shortly after canola harvest, was the most effective timing to maximize volunteer canola fall germination. But if that fall window has passed, a spring tillage treatment will provide better results than ignoring the potential weed issue.

Post-harvest herbicides are not likely the best option for a volunteer crop because winter should kill those volunteers that emerge in the fall. Spring emerging volunteer crops should be addressed with a pre-emergent herbicide, especially when there is no opportunity for tillage and there are no good in-crop options for control. The pre-emergent herbicide option ensures the emerging crop does not competing for resources, protecting yield potential and if it has some residual control, may extend the window for an in-crop herbicide application to be timed-based on other weed issues. In certain instances, pre-emergent herbicide may only control a portion of the volunteer crop, but the setback may enhance the efficacy of the in-crop application. When there is the strong potential for a significant volunteer weed population, an in-crop herbicide application may prove effective to control the volunteer but will never undo the damage of competition for light, water and nutrients during the critical weed free period.

Money is money and on every farm there are different crops that make the most dollars and sense (or cents). But pushing a rotation to make short-term money and then spending all those profits trying to spray out the impossible volunteer weed, makes no sense either. Make the crop rotation plan in the winter, and while there may be certain fields that are “flex” fields that could be sown to one crop or another, be firm on the crop plans for the fields that are certain to have volunteer crops as an issue. Include herbicide-tolerant traits that may allow for better weed control, alternate a broadleaf crop after a grass to allow for greater herbicide options, and choose a crop with a later seeding date to allow for spring tillage if necessary. Every little bit helps.

Farmers say the darndest things on social media. But the hairs on the back of my neck stand up when crop losses are being measured in double digit. Honestly, anything more than two or three bu/ac makes me want to cry from a financial perspective, but also from a weed management perspective. The key to minimizing the impact of the harvest loss is a solid plan based on good crop rotation, inclusion of pre-emergent herbicides and the judicious use of tillage. Don’t back yourself into a corner looking for impossible control answers by forgetting about the certainty of a volunteer crop being a significant weed the following year.