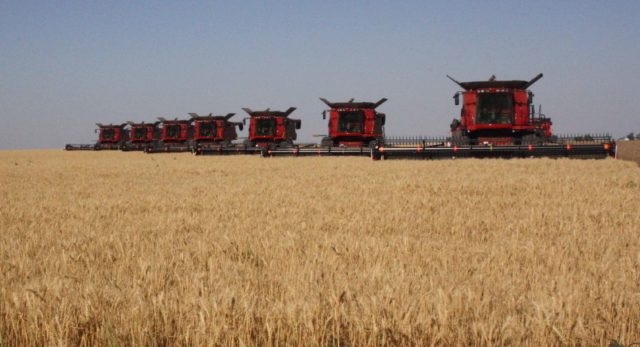 If farming was as easy as “plant, nurture, harvest, repeat,” the other 98 per cent of non-farming Canadians might try it. For farmers, getting their grain from the ground is just the start of the story. To write a happy ending, they need to sell what they sow, and like farming itself, that’s harder than it looks.

“The average farmer produces hundreds of thousands of dollars in product each year, if not millions,” says Turner. “You need to think of your crop like shares in a company. If you don’t manage your shares correctly, your company is in trouble.”

Just as stock market dynamics such as book values and price-to-equity ratios can be complex, so too are international markets for wheat, canola or soybeans. In both markets, it’s possible to wade in alone, but only if you know your stuff.

“From my experience, five to 10 per cent of farmers do well on their own because they understand the markets. They time their activity to sell when they can rather than when they must.”

For Turner, they are the “risk managers or hedge fund managers” of farming. He finds that another 30 to 50 per cent do fairly well with some small wins here and there, yet are often looking to improve.

“The rest think about how they sold grain previously rather than how the market performed. They say, ‘I caught the high at this time last year, so I’ll sell now,’ or ‘I sold wheat at $12 before so I’m waiting for that price again,’ often with no rhyme or reason to it.”

This little kernel went to market

While no one can become an expert overnight, success in marketing grain starts where any road to riches begins: mastering the fundamentals.

“Cost of production is step one. In the stock market you must consider what you paid for that share, and in grain marketing it’s about what it cost you to produce that crop.”

Another critical element in both markets is quality. According to Turner, a smart investor in stocks will know the value of a company, so farmers should know exactly what their grain is worth.

“You must have a good handle on grain quality, especially with wheat. Factors such as protein levels, falling numbers, mycotoxins, downgrading factors, and your chit and germ with malt barley.”

Once they have the basics down, producers need to learn all they can about the markets.

“Farmers must understand what’s happening out there: Should I sell my grain now? What are the bullish and bearish factors in the market and what is just noise?”

With so many marketing tools and contracts available, Turner says it can be overwhelming for farmers who already have too much on their plates.

“Understanding the pros and cons of each contract is challenging enough, let alone deciding when to sell your grain. It’s vital that you fully comprehend the contract you’re signing and walk through a few different scenarios first to see how it all would impact you.”

Are the futures friendly?

When looking at the futures market, Turner favours hedging over speculating and stresses the importance of current market knowledge.

“The average producer in Western Canada has to deal with factors like the currency component, as one of the best times we had with canola prices was when the loonie was near par with the U.S. dollar.”

Then there are international events to consider, such as the 50 per cent import tax on peas imposed by the Government of India on Nov. 8, 2017. With almost half of Canada’s pea production exported to India each year, such moves can greatly impact marketing strategies.

With all the complexities, perhaps it’s little wonder that a lot of farmers stick to straight cash sales and sell when prices are better. In the process of cashing in, though, they may be missing out.

“Not enough producers consider deferred movement of their grain,” says Turner. “Sometimes it can pay to look three to four months down the road and understand when you have bills to pay and when you need cash. If there’s a 50 per cent premium available to deliver in three months, could you wait and capture that? We call it ‘capturing the carry-in the market,’ and it can be another way to maximize your revenue based on your own situation.”

For Turner, it all comes back to comprehending the factors affecting the market and acting accordingly.

“Hope is not a risk management strategy. A producer might say he’s waiting for a certain price and when I ask him why he’s doing that he’s not sure, but that’s just the price he has to get. Know your cost of production first, and then talk about what price you really need.”

Depending on those needs, one option gaining some interest among canola growers is the canola streaming contract offered exclusively by Regina-based Input Capital.

As Nystuen explains, unlike delivery contracts from traditional companies, streaming contracts pay the farmer in advance, often before the crop is even seeded. In addition to locking in price and volume, the streaming contract pays a substantial portion of the contract value – up to 50 per cent – to the farmer at the time of signing.

Input Capital takes on the price and basis risk for the canola contracted. If canola prices exceed a predetermined rate in a crop year, anything above that is shared equally between the company and the client.

“Effectively, a streaming contract eliminates downside while leaving a farmer with a healthy exposure to rising prices, nicely aligning the farmer’s interests with those of Input Capital,” says Nystuen. “Many growers who struggle to capture a solid price on a consistent basis come looking for variable price contracts, largely because of our pricing expertise. Since we have several clients marketing many tons with us, we can start putting a pricing program together before farmers have even planted an acre.”

To do so, they employ a variety of marketing tools including basis contracts, calls and puts, and long and short positions on canola. While they don’t promise miracles, they take a long-term approach and aim for a “good solid price.”

“In any season we are trying to avoid the low prices in the fall; but it’s almost impossible to pick the high price without selling all of your grain on one day, and you never know what day that will be,” says Nystuen. “Our goal is to get as strong a basis across the portfolio as we can and then use other pricing options to build the best possible price for our growers.”

Losing interest in the banks

One such grower is Taylor Snyder in Glendon, Alta., who is in his second full year on canola streaming contracts.

“We were looking for a financing alternative to banks,” says Snyder. “I find finance companies are sometimes easier to deal with, especially one like Input Capital that understands our industry.”

Snyder describes the canola streaming contract as a “cash advance on steroids” because he can pay it back over five years and do it with grain rather than money.

“I’m literally hedging a portion of my crop for the next five years. They guarantee me a price and we share the profit if prices go higher. Granted, I may give away some profit, but Input absorbs the losses, and in this business, taking the full brunt of the downside can kill you a lot faster than sacrificing some upside.”

At present, Snyder has a third of his canola in the streaming contracts, which is generally the maximum allowed by the company. He likes the flexibility of the program in accommodating a range of circumstances.

“If you’re not too worried about money now you can take less up front and a higher price per bushel,” says Snyder. “Since we required funds, we took a higher percentage at the outset which reduced our bushel price, but it gave us the cash when we needed it most.”

Whatever your chosen marketing approach, education is critical.

“You must understand what’s happening in the market, how it affects you and what your options are,” says Turner. “There’s a real appetite for that knowledge, and rightly so. It can be hard to understand grain marketing at the ground level when we play at such a big-picture game.”

Given the stakes, it’s one game grain farmers can’t afford to lose.