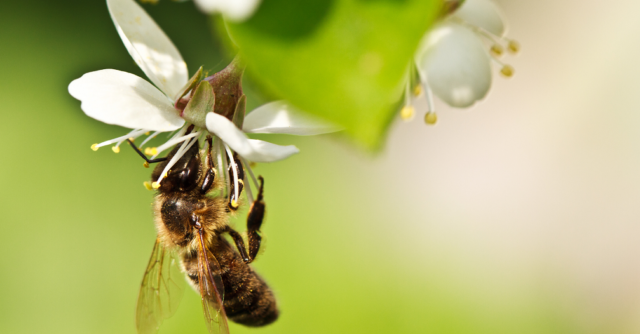 A perpetual thorn in farmers’ sides, pests and diseases require much time, energy and money to control. At large-scale industrial operations and small family farms alike, the battle to protect crops from deleterious invaders is never ending. Add to this increasingly-resistant pest and disease variants, growing public scrutiny of farming practices and rising crop yield targets, and it’s plain the war must be well thought out and fought.

Intending to be on the front line of the fight, Bee Vectoring Technologies (BVT) has developed an effective and environmentally-friendly way to protect flowering crops. The biotechnology company, based in Mississauga, Ontario, uses natural biological control products – such as a fungus called Clonostachys rosea – rather than chemicals, to protect crops from pathogens like botrytis (grey mould) or Sclerotinia sclerotiorum. But rather than spraying the product, the company delivers the product via tiny Trojan Horses: bees.

“We have introduced a new method for farmers to control different pests and diseases,” says CEO Ashish Malik. “It will increase their profitability, but also do it in a very environmentally-friendly way, bringing benefits to the retailer as well as consumers. It’s a very sustainable delivery system.”

That system comprises man-made beehives that house commercially-reared bees (as opposed to native bees which are under stress and experiencing declining numbers). When placed in the field, as a bee exits the hive to pollinate flowers, it walks through a small tray of grey powder (a proprietary compound produced by BVT which contains the fungus Clonostachys rosea) which sticks to their legs. When the bee lands on a flower, some of the powder falls off and – voila – crop protection occurs.

“The fungus is safe for humans, animals and the bees,” says Malik, “and when deposited onto the plants, blocks the botrytis fungus from taking hold. The upside to using bees is that this method uses no water, requires no heavy machinery and delivers the protective compound directly to the fruit with very little waste.” Using bees also boosts pollination, reduces the active ingredient load to a few grams per acre, and continually refreshes the application, he adds.

Crops such as strawberries, sunflowers, apples, tomatoes, canola and blueberries can be protected.

Both bumblebees and honeybees can be used with the system – bumblebees are a better option for certain crops and for indoors, while honeybees are optimal for open fields.

And the fact that chemical spraying is avoided provides an added benefit for the bees themselves, since spraying for pests with traditional neonicotinoid products and methods is believed to be harmful to them.

For certified organic farms – who, in order to remain certified, cannot use chemical fungicides – the system is particularly effective. A single bumblebee hive of 200 bees can come into contact with approximately 10 million flowers over the bloom period. “We’ve actually seen that yields, when using our technology, are increased by up to 30 per cent when compared with traditional methods,” Malik says.

BVT has tested its product in the field in Europe and North America with very positive results. Its microbe is expected to be approved for general use by the U.S. Environmental Protection Agency in the first half of this year, and is projected to be available in Canada for the 2019 crop year.