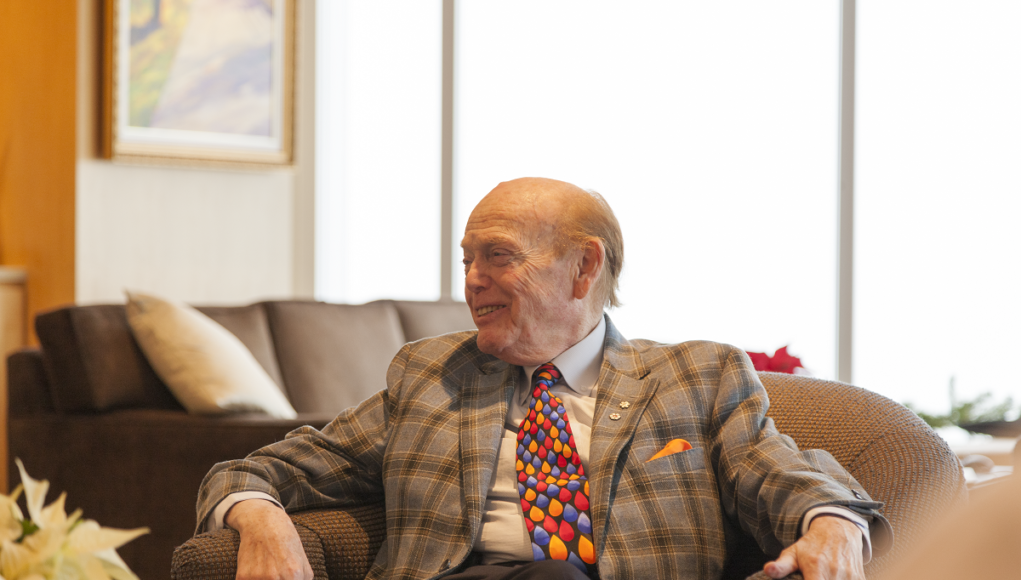 If you live in Canada, Western Canada in particular, the name Jim “Jimmy” Pattison is no doubt very familiar. Patriarch to one of the country’s largest private companies – the Jim Pattison Group (JPG) – Pattison’s empire includes car dealerships, grocery stores, radio stations, food and beverage products, entertainment and advertising divisions, to name just a few. Not only do these businesses permeate the day-to-day lives of millions of Canadians, they employ over 45,000 people at 545 locations worldwide. With sales totalling $10.1 billion in 2017, JPG’s impact, under the guidance of a sprightly 89-year-old Pattison, is unparalleled.

That impact has grown again, with JPG’s recent expansion into the agricultural equipment business. Starting with the acquisition of Saskatchewan’s Maple Farm Equipment in 2014, the newly-minted Pattison Agriculture has, with almost-lightning speed, established itself as the second-largest John Deere dealer in Canada, with 19 locations and 530 employees across Saskatchewan (17 locations) and Manitoba (two locations). According to Pattison, they’re only just beginning.

“We go to Saskatchewan a lot these days,” he reveals during a rare in-person interview at his Vancouver office in early December. “We like dealing with the people in Saskatchewan. You won’t get better people anywhere in the world than in Saskatchewan.” Quite the compliment from a man who has an entire office hallway wall covered in half-a-century’s worth of photographs of he and his wife with internationally famous people ranging from the Queen, to Oprah (a good friend of theirs), to President Donald Trump.

He’s just returned from the grand opening of Pattison Agriculture’s Yorkton location, where over 600 people attended. He’ll fly back the following week to attend the North Battleford Pattison Ag Day. “We built a new building [in Yorkton] and went down to dedicate it,” he explains, “and now we’ll do the same thing in North Battleford.” He adds they just built a new facility in Kindersley, and will likely build new ones in Leader and Humboldt soon.

Pattison Agriculture is not his first venture into the Canadian Prairies. “Recently, we’ve really sunk our teeth into getting more involved,” he says. Since April 2016, he’s opened three Save-On-Foods grocery stores (located in Regina, Yorkton and Saskatoon) and in 2015, he purchased seven radio stations in Prince Albert, North Battleford and Meadow Lake. In addition, JPG’s outdoor sign division has been active in the Prairies for several years.

His easy familiarity with the region – impressive for an apparent Vancouverite – comes naturally: he was born in Luseland, Saskatchewan in 1928. It was one year before the Great Depression, which, once underway, precipitated the Pattison family’s move to Prince Albert. His father worked as a sales manager for a Ford dealership there but business was tough, so they soon moved to Saskatoon. In 1935, during the height of the economic malaise, the family of three moved to the West Coast. They eventually settled in Vancouver where Pattison Sr. got a job selling used cars.

“We’ve been here ever since,” Pattison reflects. “But my parents sent me back in the summers to the old homestead in Major, Saskatchewan, where my mother came from, to work on the farm. They both thought I should learn about farming. I did everything you do on a farm in my teens.”

When not working on the homestead, Pattison travelled around the province playing the trumpet at children’s Christian summer camps. “We played all over the province at these church camps,” Pattison – who still plays the trumpet every once in a while – recalls.

It was at the Swift Current church camp where Pattison met his future wife Mary (from Moose Jaw) when they were both 13. They’ve been married 66 years. “The secret [to a successful marriage],” he offers with a smile, “is to marry somebody from Saskatchewan. Then you won’t have a problem!”

Growing up in Vancouver, the enterprising young Pattison worked various jobs. “I didn’t have any money unless I worked,” he says matter-of-factly, “It wasn’t complicated; I realized early on that if you wanted to do something you needed a few dollars.” He started out selling garden seeds door-to-door at the age of seven. He then sold magazine subscriptions, delivered the paper, and, at the ripe age of 11, got his first “real job” delivering groceries. “The biggest problem I had,” he recalls of the gig, “is when I got to someone’s house with ice cream and no one was home!”

His first experience selling used cars, in the summer of 1948 on break from his commerce studies at the University of British Columbia, happened only after much persistence on his part. “It was at Richmond Motors,” Pattison says, “and I applied for a job to sell cars there. They already had a salesman, but they needed someone to wash cars, so they offered me that job for $25 per week.” Pattison was also allowed to sell used cars provided the salesman was away from the lot (at lunch or dinner, for example) at the time. “My boss gave me rubber boots and a hose and said go to work, and I did. In the first week I sold three of the eight cars [on the lot] – with my rubber boots on!”

The following summer, with experience under his belt, he landed a job on the Kingsway (the mecca of used-car dealerships in Vancouver at that time) at Bowell-McLean. “I worked there all summer,” he recalls, “and then [my boss] gave me a car to drive to university. So I then started to sell used cars at UBC.”

He paid his way through university by selling used cars – on campus, during summer, Christmas and Easter holidays, and by buying and selling the odd used car himself. He left university just short of finishing his degree – business at Bowell-McLean was too good. 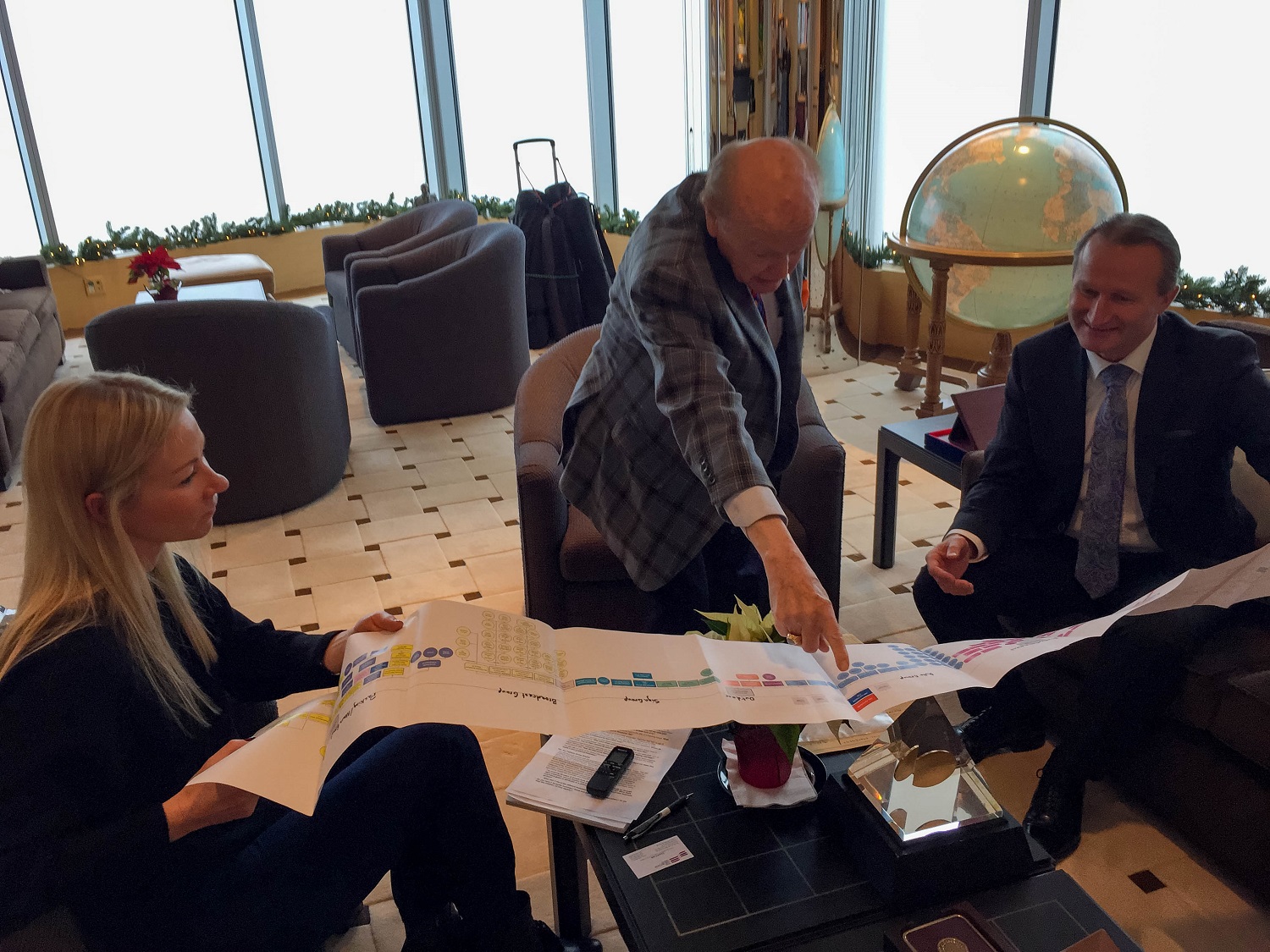 In 1961, the 32-year-old Pattison purchased his own GM franchise. “I financed it,” he says of the $40,000 loan he got from the Royal Bank. The loan was secured by his life insurance policy and the equity he had in his house. “I agreed to sell my house which had $7,000 equity. I assigned to them the cash surrender value of $7,000 in my insurance policy. My wife gave a personal guarantee, as did I. And they took 100 per cent of the shares of the company for security. They had everything but my furniture!” GM also loaned him $190,000 for preferred shares in the company.

Out of necessity, Pattison soon expanded into other businesses. “In those days GM would only allow you to have one car dealership,” he explains. “And when I had the first one paid for, I wanted to grow, but they wouldn’t give me another dealership. So I wound up going into the radio business.”

Expansion into agricultural equipment was, according to Pattison, a logical step. “First of all, it’s food. We are a little bit familiar with the franchise system, having been car dealers for 57 years. And a lot of it is similar – franchisee, factories, manufacturing, parts, service, taking in used – all of those things are fundamentally similar to what we’re familiar with. Other than that it’s very different.”

He adds that Western Canada is, he’s been told by his John Deere partners, one of three high-growth opportunities for agriculture in the world (the other two are Brazil and Ukraine).

Partnering with the John Deere brand was an easy decision. “John Deere is a very special company in this business worldwide, has an excellent reputation, and so we went with what we thought was the best. We’re very happy with our relationship and what’s happened so far.”

On the receiving end of countless deal pitches, Pattison and his team admit they tend to prefer opportunities in areas JPG is already in. “Because we know it, we’ve got management teams in place,” explains David Cobb, managing director, corporate development at JPG and who, according to Pattison, deserves much of the credit for the birth of Pattison Agriculture. “A lot of what we buy will get tucked into the existing management team, because we have that infrastructure in place with leaders who have been with Jimmy for a long time and who he trusts.” He adds that management teams are given a lot of autonomy, and are visited by Pattison and the rest of the executive every quarter “to see how we can help them.”

Indeed, management of the entire JPG conglomerate would intimidate even the bravest of leaders. Pattison is unflustered. “It’s all people, just the same as a public company,” he says plainly. One of these people, albeit key, is Maureen Chant, Pattison’s administrative assistant since 1963. “Maureen has been involved in every major decision,” he says. 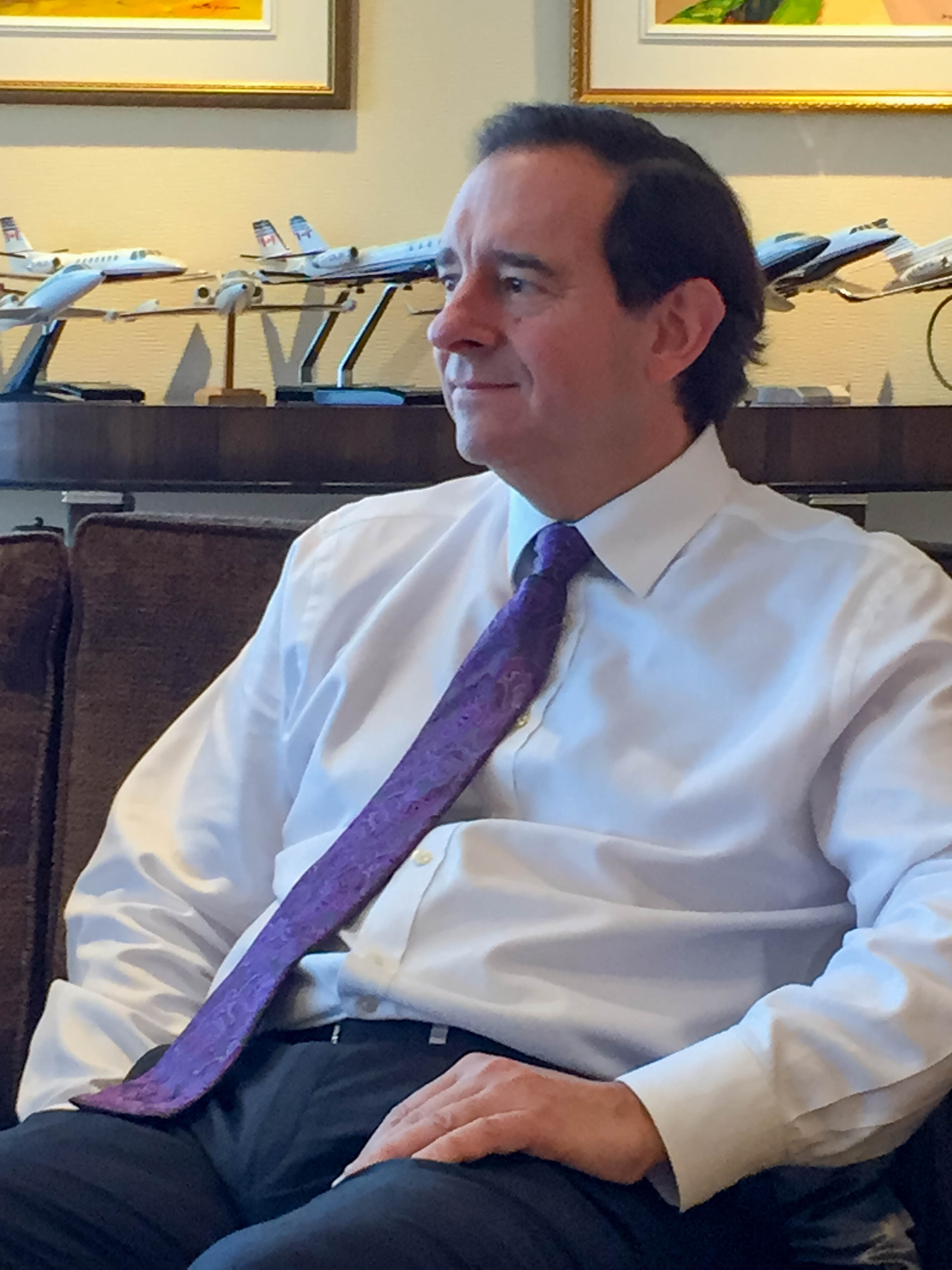 There’s no big secret to his success either. “We’re just trying to be successful. I don’t know of anybody who’s made more mistakes than I have. Mostly bad judgment; bad timing some times. Timing is hugely important. There are a lot of opportunities that have come along and we’ve been very grateful – the fact that we live in Canada, that we live in Western Canada, that I had good parents who taught me good values – honestly, integrity, work hard.” 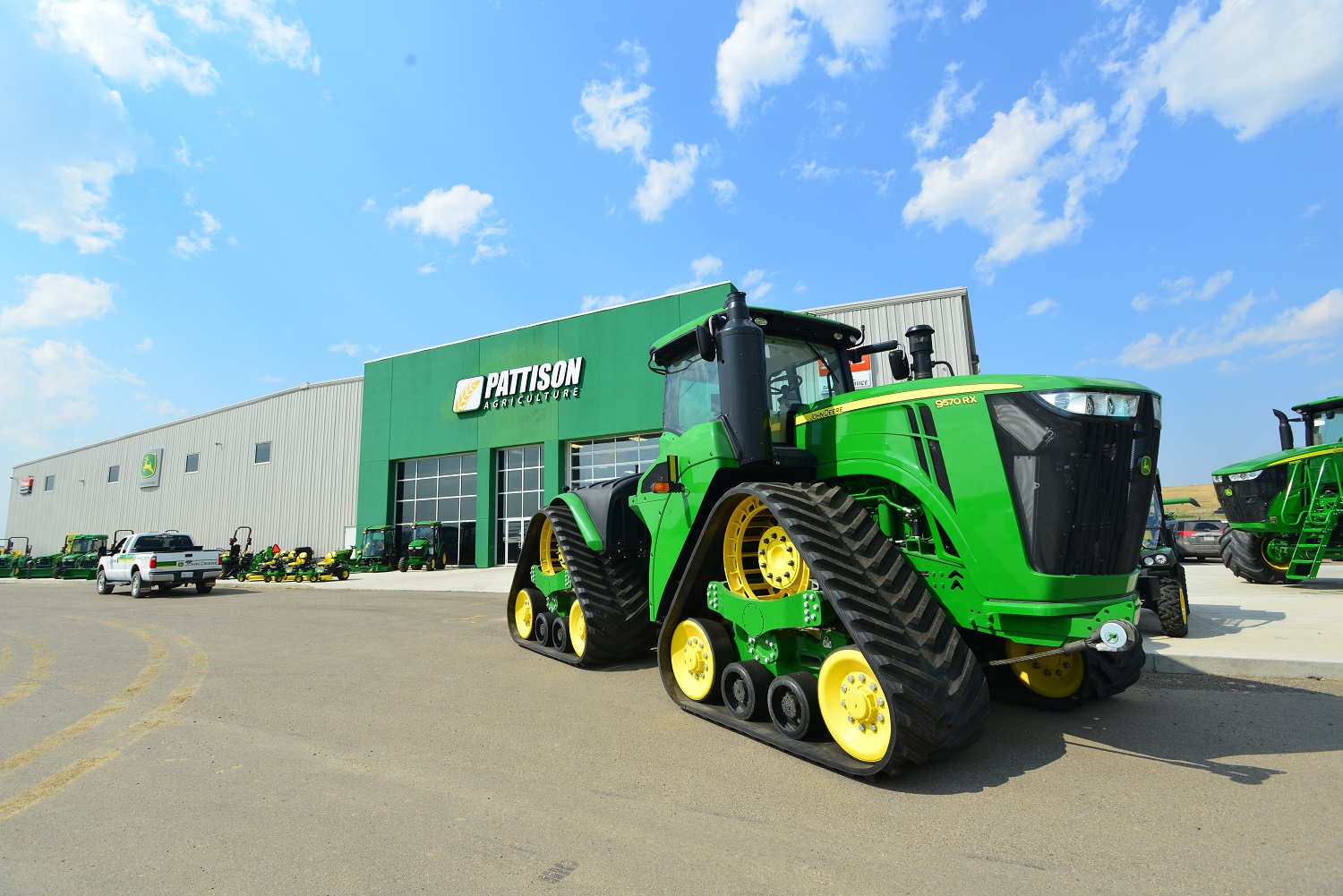 Pattison Agriculture, for example, came about because certain families wanted to sell their businesses. At the same time, John Deere was looking to consolidate the Prairies territory. “If everybody hadn’t wanted to sell out we wouldn’t be in business today,” Pattison says. 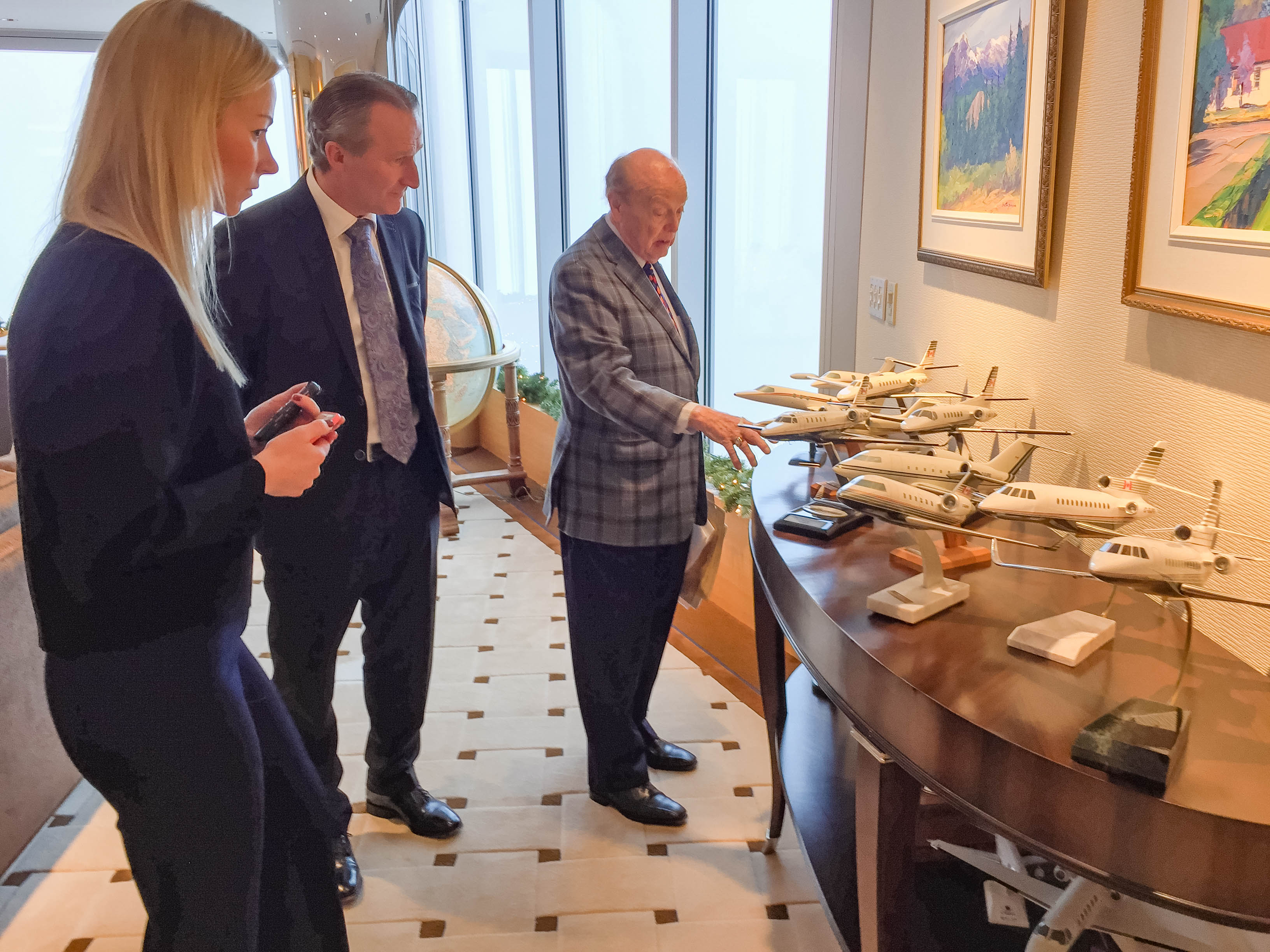 Above: Jim shares a story about how he covers so much ground between his many companies. Photos courtesy of Bob Hewitt

He also believes growing up poor was a great gift. “The best thing that ever happened to me was that I had no money.”

Does he have a favourite business? “No,” he replies, “how many children does your mother have?”

And despite all he’s accomplished in over five decades, he’s nowhere near finished. “We’re just getting started by the way,” he says quite seriously. “We’ve got the base of our company – it’s taken us 57 years to build – where we can do some serious things and give serious money away as time goes by. The bigger we get the more money we make, and the more we can give away. We’re just getting into it.