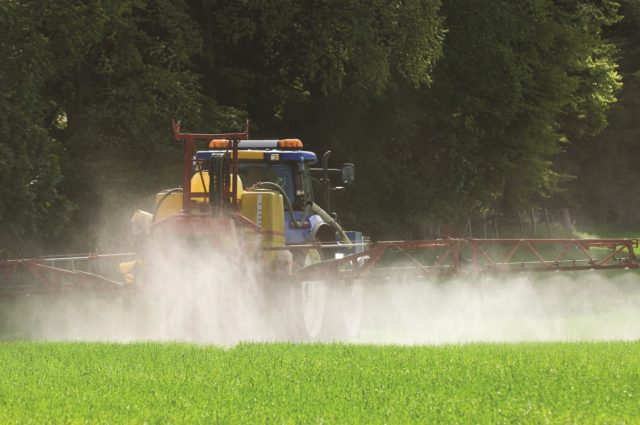 To some farmers, spraying is a difficult science and one that is never exact. That’s because there are so many variables when we look at this critical task on any farmer’s checklist. One must deal with uneven ground, wind, sprayer speed, relative humidity and a continued list of factors that never seems to shrink.

The good news is that farmers in 2018 have the ability to succeed at spraying like never before. As the years roll on, so do technological improvements, just ask Josh Umscheid. The 36-year-old operates Big Slick Custom Spraying Ltd. out of Vulcan, Alta., where he also farms 3,000 acres of grain. Nine years into custom spraying, Umscheid has earned his stripes when he thinks back to what his limitations in the sprayer were.

“The first sprayer I had, we had no auto-height control on it,” he says of his old AGCO RoGator 1074SS. “Many people don’t realize how nice that is until you see some of the hills we spray. The first year … you have to be on the ball. You’re doing 22-25 kilometres per hour down a field and you don’t have much ability to slow down because you’re limited to certain pressure ranges in order to stay on rate and looking over your shoulder to make sure you’re not too low or too high.”

Thankfully for Umscheid, spraying technology rarely stagnates. One year into his custom operation, Christmas came early when his sprayer was outfitted with hydraulic boom height control with a wheel under the boom. It afforded him the rare ability to observe what was happening inside the machine like never before.

By 2012, Umscheid made another upgrade, this time to an ultrasonic setup. One year after that, he retired the RoGator and switched to a Case IH 4440 with five sensors on a 120-foot boom, which automatically measures and maintains constant boom height.

“If I want it 28 inches above the [crop] height, that’s where the ultrasonic tries to keep that height at all times,” he explains. “Before, your boom was constantly trying to feel on the ground. Every time it touched ground, you added friction to the machine, things were breaking. Now, you weren’t touching, and booms were trying to stay as level at all times.”

For a custom operator like Umscheid, all the bells and whistles advertised by a company best ring true and blow clear because he’s a busy man partial to minimal risk. The young farmer sprays a minimum of 60,000 acres annually and up to 80,000 when everything’s clicking along well. As the technology improves, Umscheid and others are becoming increasingly nuanced in their approach to be as efficient as possible, and it’s clear to see why.

“What’s changing is the efficiency and productivity,” says Jason Deveau, application technology specialist with the Ontario Ministry of Agriculture, Food and Rural Affairs. “The question is how can we do more with less? It’s the never-ending battle of any operation—become more efficient with less.”

Deveau observes that as sprayers continue to expand in size and booms are wider than ever, he does have reservations.

“While some of these advantages are interesting, it’s possible they’re moving us in the wrong direction,” he says, explaining that each year farmers learn more about soil damage through compaction, driven by increasingly larger equipment. A flurry of issues may accompany the ‘bigger is better’ mindset.

“When you’re driving quickly it negatively impacts spray coverage,” he says. “Your coverage uniformity goes right into the can. There’s a wake behind a sprayer, just like a speedboat. It can draw fine sprays from the pattern, increasing drift potential and preventing them from landing where we intended. Plus, a consequence of fast speeds is higher booms to prevent mechanical damage, which also reduces coverage and increases drift. We encourage people to slow down. It lets us drop our boom and be more efficient. A boom lower to the ground will improve coverage and reduce drift.”

For many of the ails farmers face during spraying, Deveau points to pulse-width modulation (PWM) as a possible answer.

The main difference between traditional pressure-based systems and PWM is that the former controls rate using pressure. However, it may affect droplet size and pattern stability. With PWM, the rate is controlled by the “duty cycle” of a nozzle. A solenoid can interrupt the flow 10 times per second, or faster, depending on the manufacturer. The duration a nozzle spends in the “on” position is its duty cycle, or pulse width. The longer it’s on, the higher the rate. Nozzles operate independent of one another. When an adjacent nozzle is on, the neighbour is off, blending the flow and filling in the pattern to prevent skips. This frees pressure to be used independent of rate to make minor changes to droplet size, according to Deveau.

“Pulse width has an advantage because it can hold the rate of spray from a single nozzle over a greater range of speeds than using pressure changes per a conventional rate controller,” he says. “It can be used with field mapping systems to do precision spraying. It can perform turn compensation, where the outside of the boom covers more ground than the inside of the boom on a turn, and the duty cycle can compensate, except on really tight turns.”

Deveau believes PWM systems will be linked with weed detection systems that will determine how much spray is needed for each specific target, or even which on-board product is applied.

Gary Moffat agrees that nozzles are integral to strong in-field results, calling the small plastic implements one of the most overlooked components on a modern sprayer.

“The biggest thing is the nozzle because the end result of all the technical stuff is that [what you are spraying] has to go through a nozzle to give us proper droplets and coverage,” says Moffat, president and spraying analyst of Specialized Spray Systems in Lethbridge, Alta.

He works with operators to drive their efficiency up, and nozzles are central to operators’ success.

Moffat says it was normal that operators used to have up to 20 per cent drift and evaporation loss due to a variety of reasons, including droplet sizes that were either too light, weighing less than 150 microns, or too heavy—more than 600 microns. The perfect weight, he says, is 300-500 microns.

However, Moffat estimates only 40 per cent of Prairie farmers are using a PWM system, and, of that, only about five per cent are using proper nozzles.

“The farmer is trying to learn about pulsing systems. To my feelings, the farmer has been oversold [on PWM] and does not realize that he needs a proper nozzle to make it work,” says Moffat.

“We can apply way better with these new technologies, and have way less environmental damage,” says Moffat, adding that with proper nozzles and a sprayer tune-up, farmers can expect to reduce drift to less than five or six per cent.

“Most of the farmers today at least have speed control and GPS, autosteer, autoboom height control, autoboom shut off, separate boom shut off, and individual nozzle shut off,” says Moffat. “That can all help them spray better, but they still need the proper nozzle on it. It’s the nozzle that forms the droplets.”

Despite PWM technology still evolving and changing, Umscheid believes it is here to stay, despite naysayers.

“When we first got pulse width, big companies would talk it down, say it’s an expensive upgrade and be making excuses why you didn’t need it. Now I laugh because it’s just about standard on sprayers. Obviously, it was a huge leap in technology. People have seen its value.”

Head: Take to the Skies

Don Campbell thinks life on the ground is boring. The Elie, Man., airhead has been working on his drone skills when it comes to in-field spraying. He owns and operates ROGA Drone Ltd., which stands for Remote Operated Green Application. Campbell is the first person in Canada to receive a special flight operating certificate from Transport Canada, for the purpose to aerially apply pesticides and herbicides.

Since 2017, he has worked with Kray Technologies out of Kyiv, Ukraine, ultimately hoping to introduce the concept into Canada sooner rather than later.

“We were on the same page with what we wanted to accomplish,” says Campbell, who tests pilot projects and will begin distribution for Kray drones in the fall. The 77-pound drone he’s testing boasts eight rotors and a fixed wing that carries a 16.5-foot boom. The 10-foot wide drone is constructed mostly out of carbon fibre and comes complete with a prop nose, much like an airplane, to generate forward thrust through its one propeller. Campbell is currently testing ultra-low volume spray as it zips along three feet above the crop canopy while simultaneously detecting terrain variations. The black beast can spray 40 to 50 acres per hour and is linkable to normalized difference vegetation index (NDVI) maps for spot spraying systems.

When Kray’s drone is in flight, it has the capability to move at speeds of up to 112 kilometres per hour. Despite not flying at top speed all the time, Campbell is in the process of discovering the optimum pace to spray while minimizing drift as much as possible.

ROGA Drone has also applied for fungicide test funding and works closely with chemical companies to ensure the best results are produced given the exploratory nature of these trials.

“I think this year is going to be a lot of testing, side by side, just to prove that this concept is going to work. We are going to try and walk a little bit before we run. Hopefully by fall, we’ll have these tests completed,” he says.

Campbell doesn’t think drone technology is in direct competition with ground rigs and he says regular wheel-and-chassis sprayers have their place, until you get into wet conditions.

“I think if we can prove this technology is efficient, just for the cost of them, I can see farmers having their own units on their farms; maybe not to spray the whole farm, but definitely certain parts or tight spots.”

The Kray will run you about $62,000, which Campbell thinks is a bargain compared to a $500,000 high-clearance sprayer, or perhaps $1 million for an airplane.

“I can see this being adopted fairly quickly if we can prove this is doing the same job as other spray applications,” he says. “Just from a cost perspective it makes sense. We had just a tremendous response. There’s a lot of interest in it.”

NOTE: All sprayer images are generic in nature, so, the cutlines are also written to be used with any of the images. I will supply three cutlines, suitable for use on any image in the sprayer story folder.

Cutline: In a sprayer system with pulse-width modulation, the rate is controlled by the “duty cycle” of a nozzle. A solenoid can interrupt the flow 10 times per second, or faster, depending on the manufacturer. This differs from traditional pressure-based systems where rate is controlled using pressure.

Cutline 2: Drift and evaporation loss are two important factors farmers must always keep in mind while spraying. If a droplet weighs under 150 microns, it will drift; if it weighs more than 600 microns, its heaviness will make it fall to the ground, missing the plant. The perfect droplet weight is between 300 and 500 microns, according to Gary Moffat, president of Specialized Spray Systems Ltd. in Lethbridge, Alta.

Cutline 3: When spraying, an operator must remember that proper speed is critical. If you drive too fast, your coverage uniformity will plummet, causing drift potential to increase. It may also higher booms to prevent damage, which can also contribute to drift and poor coverage, according to Jason Deveau, application technology specialist with the Ontario Ministry of Agriculture, Food and Rural Affairs.

All photos titled “TW Sprayer” are from Tom Wolf and should be credited “Courtesy of Tom Wolf.”