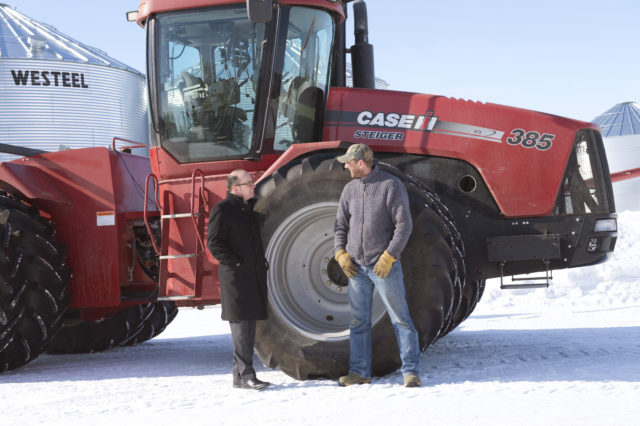 Weather trends, commodity prices and market access over the last couple years have slowed recent drastic increases in farmland value across the Prairies. However, industry experts say the outlook is still good.

Ted Cawkwell is an agriculture specialist and realtor who grew up farming in Saskatchewan. His business has him on the ground helping farmers throughout the province make good decisions around buying and selling farmland.

While there have been murmurs across the Prairies of a “cooling down” in farmland values, Cawkwell says many analysts are still predicting increases in land values, depending on region. He adds that considering the massive growth between 2010 and 2015, it would not be surprising if the market experienced some correction.

“Certainly, no one is predicting a massive correction like in the 1980s, because today’s interest rates aren’t going to drive that down. But, a five to 15 per cent correction in certain areas would probably not shock anyone today,” he says. “In any market cycle, there are peaks and valleys. And typically, when things skyrocket that fast, it’s common to experience a correction, or at least a cooling down.”

Cawkwell believes short-term farmland values may plateau soon, but he suspects any correction or downward movement will only be experienced in weather-pressured areas.

“Weather and commodity prices are the biggest drivers on profitability at the farm gate and that’s what drives farmland values,” he says. “Southwest Saskatchewan has had two extremely dry crop years in a row. If they have another one this year, that could be an area that might see a small correction. In other areas, like northeast and east-central Saskatchewan, they’ve had phenomenal crops for six or seven years in a row. Those farmers are doing really well. I wouldn’t be surprised to see these areas buck the plateau trend and continue to rise if they continue to pull off these big crops.”

J.P. Gervais, chief agricultural economist with Farm Credit Canada (FCC), says values remain strong. Recent numbers may be below those of 2012 and 2013, particularly in Saskatchewan and Manitoba where increases ranged from approximately 20 to 29 per cent in each year, but less drastic increases today are a matter of perspective. “I’m expecting land values to continue to grow, but at a slower pace,” he says.

However, Gervais adds that market-access issues absolutely loom large across the Prairies for 2019 – specifically in light of recent tensions with China affecting Canadian canola exports, India’s restrictions and tax on Canadian pulses and Italy’s COOL labelling policy on durum.

What happens when values rise and fall?

To understand farmland values today and what they mean for farmers, one can look back over the last four decades. Farm families will recall the paradigm shift of the 1980s when farmland values across the Prairies rose dramatically over a couple years, hitting all-time record highs in 1982 until high interest rates drove them down, halving prices in many cases.

Those values typically stayed down over the next 30 years until 2010.

“Farmland values in Saskatchewan had been undervalued compared to the rest of the free world on an exponential scale,” says Cawkwell. “We were due to catch up and values started rising rapidly, close to 20 per cent each year between 2010 and 2015. Land values essentially doubled in the span of five years.”

In other words: “An operation with $5 million in farmland in 2010, which isn’t even huge in today’s market, went up to approximately $10 million in land value in 2015,” he says.

This surge becomes important in today’s market because of the massive effect it had on the net worth of Prairie farms.

“In farming, as in any business, you’re trying to build net worth,” says Cawkwell. “That equity is what you can borrow and leverage on. Cash is usually tight on farms, but ideally over time you build equity. In this scenario, people’s equity ballooned in a five-year time frame. All of a sudden, farmers in the province had much more borrowing power.”

That resulting borrowing ability is seen across the Prairies today in new machinery and updated grain storage. And farmers are leveraging their land equity to buy new land.

“That equity they built in the land is a driving factor that’s changed the landscape of agriculture in Western Canada from 2010 on,” says Cawkwell.

While much of Canada’s analytical data is broken down by province, Cawkwell and Gervais say that farmland values are increasingly based upon region, not entire provinces.

“It’s becoming more difficult in this market to paint a really broad view of the market,” says Gervais. “We have to dive into specific regions, and then also consider supply and demand.”

For instance, in 2017, Alberta’s Peace Region saw an average increase in land value of 11.5 per cent with pockets of strong demand in the area, whereas central Alberta held steady around eight per cent.

Saskatchewan’s west-central region’s farmland values were still climbing nearly 17 per cent in 2017 in a competitive market, while the southwestern part of the province had a 14 per cent jump as farmers looked to expand.

Manitoba’s Parkland experienced the province’s highest value increases at nearly 10 per cent with farmers also looking to expand despite limited land for sale, increasing demand in the area. The Central Plains-Pembina Valley saw no change due to higher-priced land and little change in ownership.

In 2019, a few major challenges are stacked against western Canadian ag.

“Since last year, Canada’s ag commodity prices, including grain, are down while interest rates are up,” says Cawkwell. “We’re facing some recent and new-found challenges, including trouble with China for the canola export market. We know that farmland values ultimately follow farm-gate receipts. When farmers are profitable, values go up; when they’re not, farmland values cool off.”

As profitability at the farm gate may be narrowing, it appears farmland value could do the same.

Cawkwell believes long-term real estate values of any type, including farmland, always go up. Where uncertainty lies is in the short term, and this can be problematic for sellers. Particularly those close to retirement.

“The biggest bulk of my sellers are at retirement age,” he says. “If they’re 65 years old, maybe they don’t mind farming a few more years if they think the market will move in their favour, but they’re not looking at long-term trends.”

The last seven years saw many farmers seeing opportunity and exiting earlier than anticipated. “They were saying the values were too good. They didn’t want to take the risk that there could be a correction,” says Cawkwell.

Gervais agrees that the long-term forecast is more optimistic than the short-term, especially since 2018 was a volatile year for western Canadian ag, given trade tensions and weather issues.

“We have some significant headwinds in the short-term future to be thinking about. I thought the start of 2019 would be a less volatile and uncertain year, but at this point, it’s not shaping up to be better. Interestingly, the world economy has slowed a little as well,” he says.

Still, he remains highly optimistic into the long term.

“If we look at growing food demand and Canada’s reputation as a reliable high-quality supplier to the entire world, I’m absolutely positive about our long-term situation. The world wants Canadian agricultural commodities.”