Home 4-H The leaders of tomorrow 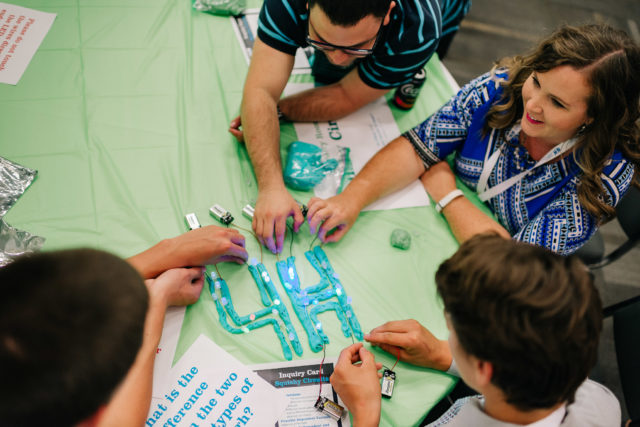 Ask the average Canadian about 4-H and it is very likely visions of cows and cooking will come to mind. But the 105-year-old organization has come a long way to ensure they engage and inspire passion in today’s youth and tomorrow’s leaders.

“We’re plunging into our second century as one of the longest running youth organizations in Canada, certainly in terms of rural communities and the demographics that we work with,” says Shannon Benner, CEO of 4-H Canada. “But, even though we’re over 100 years old, we’re very young in terms of the generation of young people we’re working with today. What’s relevant to them is really different from what was relevant 10 years ago.”

With that in mind, the organization will launch its new three-year strategic plan, along with its new vision and mission statements at their July 11 AGM in Ottawa, Ont. To keep up with Canada’s rapidly evolving agricultural industry, as well as youth priorities, the strategic planning cycle is relatively narrow, typically three to five years in range. This upcoming plan will continue to see science and technology as major program pillars.

“Young people can really identify with this, and it’s a good way for us to bridge 4-H to today’s youth,” says Benner.

David Hovell, chair at 4-H Canada, added that there are four key focus areas: impact on youth, identity, leadership excellence and resources. Each of these focus areas is geared towards improving 4-H programming, expanding the brand across the country and reaching out to new Canadians, as well as youth in urban and suburban centres.

“These priorities will guide us for the next three years, and also serve as a foundation for the future of the club,” he says.

4-H programming is developed around community-building, leadership skills and hands-on tactical project work. While its history is entrenched in agriculture, Hovell notes that the face of agriculture, and Canada’s young people, are vastly different than a generation ago.

“Agriculture is the key element of the program, but our organization has evolved to the point where you don’t need to live on a farm to be involved in a project. We have young people who show rabbits, or even enrol in a dog obedience program,” he says.

Further to this, Benner describes projects around food security, such as urban gardening. “What 4-H teaches is relevant to any young person, whether it’s teaching them career skills, science and technology or even patio container gardening. They’re also building skills in leadership and public speaking.”

Other projects around the country include those in computer programming and robotics. There’s even 4-H club near Guelph, Ont., with a drone project. Regardless of the plan, each one brings hands-on technology that is highly applicable to today’s business environment and marketplace.

4-H membership has grown over the past three years and currently sees approximately 60 per cent hailing from rural communities with the remaining 40 per cent from rural and suburban markets combined. It is also becoming more common to see urban centres with a 4-H presence, such as in the cities of Calgary, Alta., Brandon, Man. and Vancouver, B.C., with urban membership currently comprising 17 per cent of the 4-H DNA.

Membership is stable with growth in certain regions, which speaks directly to the quality of the program. Part of this growth can be credited to 4-H Canada’s focus on reaching out to new Canadians.

“4-H provides wonderful opportunities for young immigrants to learn while becoming very much a part of the fabric of their new communities,” says Hovell.

One of the organization’s “Canada 150” initiatives was the development of their new club kit, a package anyone can receive from their provincial organization in order to start a club where they live. The kits are currently being translated into different languages to increase their attraction and become more accessible for new Canadians. The club kits include the 4-H member handbook, 4-H leader guidebook and the year’s program catalogue, in both French and English so far. 4-H Canada also includes various promotional items and then the kits are offered to provinces for free to be customized with provincial publications and other promotional items.

The organization has also taken opportunities to deliver the benefits of its programming to other parts of Canada’s makeup, particularly in Indigenous communities. “We all hear stories of young people having a tough time,” says Hovell. “4-H can be part of a brighter future for them. We’re looking forward to working in those communities and seeing what we can do to give young Canadians of all socio-economic backgrounds some wonderful opportunities.”

4-H has increasingly strengthened its emphasis on what they refer to as “STEM,” or science, technology, engineering and mathematics.

In May, five outstanding 4-H members competed at the Canada-Wide Science Fair (CWSF) in Ottawa, Ont., all of them earning prestigious awards. Traditionally accessed through school programs, 4-H members are privileged as part of the only not-for-profit organization with direct access to seats for five youth to exhibit at CWSF.

Mac Dykeman of B.C. earned gold and platinum awards in the Junior category with her project, “Safer Chick-ments: An innovative solution to reducing stress in chick shipments.” Her project was voted in the top three of 406 total entries, among other awards. Next May, she will move on to the 2019 Intel International Science and Engineering Fair in Phoenix, AZ, with the Canadian team.

“Having our 4-H members competing and winning at the highest level in the country is a testament to our youth and the importance our programming places on STEM learning,” says Benner. “I am already looking forward to next year.”

Hovell adds that the work seen at the CWSF is absolutely remarkable. “They’re doing things like extracting protein from crickets and extracting elements from lobster shells to be used as polymers in manufacturing,” he says. “Scientists from sponsor organizations such as Bayer CropScience Canada and retired university faculty members are there to view and judge the exhibits. PhD scientists are judging these young people and saying, ‘this is PhD-calibre research.’ They were just amazed.”

“Our science clubs are growing,” adds Benner. “Even though 100 years ago you might never have thought of 4-H having a drone club, here we are today. It’s young people learning critical skills they can bridge to agriculture or a number of different industries where there’s still a labour gap in Canada.”

Another celebration of leadership excellence, Benner says her biggest highlight of the year is the 4-H L.E.A.D. (Leadership Excellence Awards of Distinction) awards night. These awards of distinction for members across Canada are considered the pinnacle award for club members who demonstrate outstanding academic achievement while also making a great difference in their communities as leaders.

“To be able to see what they do, have the opportunity to engage them, meet with them and have them travel here to receive their awards and hear their speeches is my favourite night of the year,” she says.

When the four L.E.A.D. scholars receive their financial awards, they are also surprised with their dream mentors, taken from their own wish-lists. These mentors have included CEOs, industry leaders, and even an olympian. “It’s a pretty cool experience to be able to offer that to a young person.”

The next L.E.A.D. awards evening will take place January 31, 2019, in Saskatoon, Sask. 4-H Canada will recognize its volunteer of the year, outstanding youth and alumni of distinction.

The organization also recently launched its Hands to Larger Service Program. Run in co-operation with the Government of Canada through its Canada Service Corps, the initiative will encourage young Canadians to get involved in service to their communities.

“Starting this summer, selected youth ambassadors from coast to coast will have the opportunity to plan, implement and lead service projects in various communities,” says Benner. “Urban, rural, you name it, right across the spectrum—they will learn the value of service while developing skills that prepare them for careers in areas where we need them. It’s all about the value of giving back to our own communities and positively impacting the world.”

As past-year chair of the Global 4-H network board of directors, Benner also has a unique insight into 4-H as a worldwide community and is still very engaged in the board.

A major highlight for her was 2017’s 4-H Network Global Summit, hosted in Ottawa, Ont. “It was a really great opportunity to expose our young Canadians to what 4-H looks like around the world,” she says. “They were amazed at what they all had in common in terms of the 4-H program, regardless of where you go. It’s about helping young people succeed and building leaders who are passionate about what they do.”

She adds that in global terms, 4-H as a program is not unlike that in Canada, where 4-H in Newfoundland and Labrador can look vastly different from a club in B.C. or on the Prairies. “Our members were able to see things from around the world, like growing coffee beans in Jamaica, or community service projects from Finland or a drone club in Korea. The 4-H recipe is very different around the world, but it never strays from building confident young leaders who want to make a difference.”

And making a difference is just what they are doing. “We’re developing farmers of the future, partners in developing the bio-scientists and the ag innovators that will feed our hungry planet,” says Hovell. “We’re so proud of these members stepping up to do extraordinary work.”