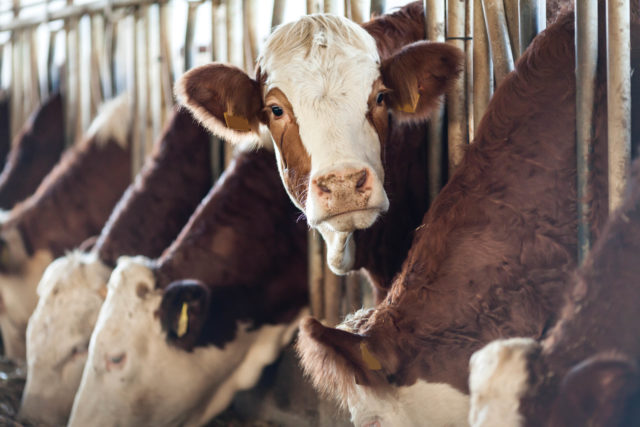 It all started in the fall of 2016. With the seemingly endless rain that year, most of our chickpea crop never matured before the first frost. We had a lot of acres with hardly any chickpeas, and a lot of biomass that needed attention.

On a whim, I called a cattle-producing neighbour. “Would you be interested in cutting and baling these chickpeas? I don’t want anything for them. I just need to get the land ready for seeding in the spring.”

The cattleman neighbour took a sample and sent it to a feed-testing lab. When the results came back, it turned out the chickpea residue would actually be pretty good feed.

But it was a big job and it was very late in the fall. The cattleman neighbour teamed up with another local cattle producer to get a bunch of it cut and baled. And then they hauled away the thousands of bales.

Fast forward to the spring of 2018. The cattleman neighbour is in a bit of a time crunch for getting his corrals cleaned. He knows we’d like some manure on various parcels of land, so we strike a deal.

He’ll load and spread manure on his own land while also loading a custom manure applicator to spread some manure on our land. The manure for us is free, but we need to pay for the custom applicator.

Ordinarily, the cattleman neighbour likes to save all his manure for his own land, but in the interest of time and efficiency, we are able to utilize some to our benefit.

As is often the case, jobs converge. At the same time the manure needs to be hauled, a rented breaking disc becomes available for some land the cattleman wants to break and eventually seed back to grass.

One of our sons is out from the city for an extended long weekend and he can help run the breaking disc while the manure gets hauled. Good utilization of labour resources.

Later on in the spring, I spray the breaking to control the grass that’s coming back. Our little high-clearance sprayer is better suited to rolling over this rough ground than the cattleman’s pull-type sprayer.

“You know, if it finally rains this spring,” I tell the cattleman, “you might want to seed that breaking. I have some flax that might work well.”

“Do cattle eat flax?” asks the cattleman. His concern is the feed supply and he would more likely want to seed something like barley.

Grain producers and cattle producers should sit down and “shoot the breeze” more often to explore areas of co-operation. Too often we operate in our own solitudes.

Why isn’t more grain land fenced so that cattle can forage the fields after harvest? Why aren’t forage crops included as part of a routine crop rotation?

Beyond the economic advantages, it’s a lot of fun to work back and forth with neighbours who have different needs and concerns. Despite our different perspectives, we have a lot in common and we can learn a great deal from each other.