Home Spraying Equipment On the Move 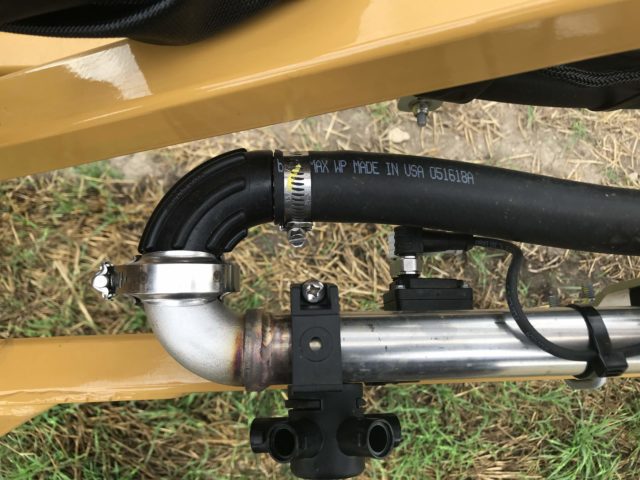 Recirculating booms are a fairly new concept in Canadian sprayers, with uptake at the front of the curve. However, Jason Deveau, Application Technology Specialist with the Ontario Ministry of Agriculture, Food and Rural Affairs, thinks they have great potential.

There’s still some confusion about the technology because farmers are not familiar with it yet.

“The recirculating boom is often confused with a lot of the features on the sprayer that I talk about like continuous rinsing,” says Deveau.

For a conventional boom, flow travels in a single direction from the tank to the nozzle. However, when a recirculating boom isn’t spraying, the flow continues past the nozzles and returns to the tank via a return line. This is an advantage for many reasons.

“The first thing it does is eliminate boom ends,” says Deveau, who has a background in horticulture. “Most booms are broken up into multiple sections, each of which terminates in two boom ends that stick out past the last nozzles. Flow slows or even stops in those boom ends and they are notorious for harbouring pesticide residue. It bleeds into subsequent applications when you least expect it,” he says.

This means that when the farmer is cleaning a sprayer, they must take the time to open and flush the boom ends. However, when there’s a recirculating boom, the single, continuous circuit has no dead ends.

“Let’s say we’re spraying a product that isn’t going to stay in suspension very well,” says Deveau. “In a conventional boom, sections are fed from the middle. Pressure drops as the solution approaches a dead end and as it gets further away from the pump. When pressure drops, so does flow, and products can begin to settle out. In practice, this means the centre section can have more product than the last few nozzles on the outer sections, and this would affect the consistency of the application,” he says.

The more recent continuous booms are fed from the ends of the boom sections, not the middle, equilibrating pressure, and flow, to keep the solution from settling. Further, when the nozzles are shut off, the solution returns to the tank via a strainer that tends to break up any potential clogs or undissolved pesticide before it has a chance to plug a nozzle.

“It gets caught out in the filter rather than the nozzle,” says Deveau.

Another scenario that occurs with a regular boom is when farmers enter a field with their boom full of water and their tank filled. However, they have yet to spray anything out of the boom.

“So, what they have to do is park at the entry to the field and charge the boom. Basically, they sit there and they spray until they are convinced that the pesticide has made it all the way to the outside edges of the 120-foot boom. That could be as much as 30 gallons sprayed in one spot,” says Deveau.

Farmers could often be spraying at the same spot, at the same entry point, every time they enter a field.

“Beyond the fact that [it represents] about $50 worth of water and pesticide, it’s not a preferred practice to spray in one spot over and over again,” he says.

With the recirculating boom, farmers have the option of nozzle-by-nozzle control. When the nozzles are off, the water in the boom circulates back to the tank – diluting the tank a little – and the boom primes without spraying a drop. A farmer then turns on the nozzles and starts driving.

This can even be beneficial when a farmer is rained out.

“Perhaps they haven’t gotten to the end of the job, or maybe it’s too windy. An operator can draw clean water from the rinse tank to displace the product from the boom. Now the pump and boom are filled with water, diluting the chemicals,” he says.

“The next day, they can circulate the water back to the tank, agitating the remaining tank mix and priming the boom to pick up where they left off,” he says. “They can start again. They even save the rinse water that they were using. And, of course, it makes rinsing more effective when the tank is empty.”

Aaron Hargreaves has been using a recirculating boom for about 10 years. Two years ago, he bought a small Agrifac sprayer, which is almost 5,000 litres. He says the Agrifac takes about 90 seconds to rinse out.

Prior to the Agrifac, Hargreaves used a RoGator with Pommier booms. He started using recirculating booms thanks to his equipment salesman.

“It was recirculating, too, but I like the way this is set up better. It makes rinsing much better,” says Hargreaves, who farms near Wawanesa, Man. “I bet you there’s maybe a cup of chemical left in my tank. I’ve never had a sprayer with that little residue left.”

Since he has started using a recirculating boom, he has never had an issue spraying out any of his crops.

“Quite often, guys spray a Grade 2, and then they spray a Liberty and could potentially spray out their canola,” he says. “It happens all the time. I never get that issue. You switch from wheat to canola, you rinse out and you fill your tank, and your boom is charged and you’re ready to go. It’s super convenient. Once you get one, you’ll never go back. It’s just making the investment to get one to start with.”

There are currently only a few recirculating sprayers that can do this in North America.

Hargreaves really likes the rinsing on the Agrifac and says that is a selling point for him. He doesn’t have to get off the cab, and can literally spray out all the chemical. “It’s super environmental, and super safe for the operator.”

One of the earliest recirculating booms was the Pommier, created by a French company, which is available as an aftermarket modification for most sprayers.

“It’s been tried and tested and there are no problems with it. As one of the first, it set the bar for what was possible. But since then other versions have evolved that offer additional features,” says Deveau.

The Dutch Agrifac sprayers that feature recirculating booms have been available in North America for a few years. Clever plumbing, wider manifolds and more stainless steel lines make them easier to clean.

A recent newcomer is RoGator’s Liquid Logic, available on its C Series sprayers.

“They claim no more than one psi difference from nozzle to nozzle. Combined with the ProStop-E electric quarter-turn valve, nozzles respond instantaneously, turning on or off with no difference in pressure along the boom. It’s a precise system that lends itself to reduced spray overlap,” he continues. “Looking ahead, there’s a real place for this in North American spraying. There really is. I think it’s something we’re going to see more and more often.”

Because the technology is still considered new, it’s not cheap.

“Growers will have to decide if the additional expense is worth the features recirculating booms offer,” notes Deveau.

As more systems become available, more people are starting to consider the possibility.

“In Europe, the technology has been around for some time. It became a commercial reality there because they are far less tolerant of point-source contamination, and their legislation is very specific about pesticide waste and drift. Obviously, we have legislation in North America as well, but we aren’t as strict when it comes to enforcement,” he says.

“Sprayers were built so farmers could comply with their laws. In North America, we don’t have that particular pressure.”

With all the potential benefits, Deveau hopes people will start to embrace the sprayers before they are forced to adopt their use. When that will be, time will only tell.