Home Spraying Equipment What do European Sprayers Bring to The North American Market? 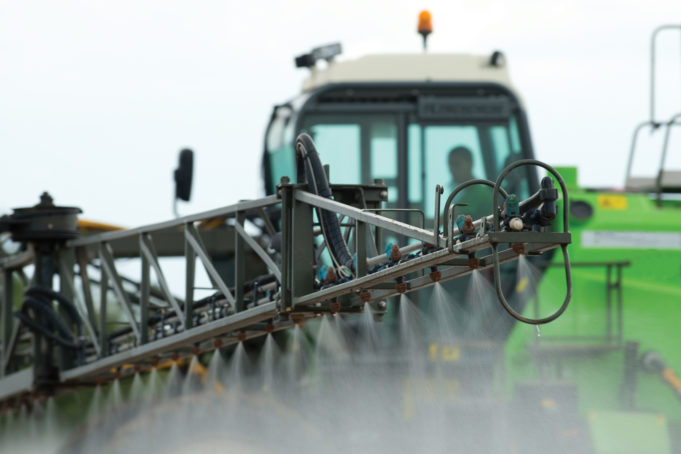 For many years, European agricultural machinery was considered too small to be relevant for North American conditions. That started to change when Claas and New Holland began introducing large harvesting equipment. Larger tractors from the likes of Fendt and seeding and tillage equipment from companies such as Horsch followed soon after. Now, European sprayers are knocking on our doors. What do they bring to the party?

The typical large self-propelled European sprayer of 2020 has all the capacity of the largest North American models, and sometimes more. Boom widths of 36 metres are common, and wider booms extending to 40 and even 50 metres are available. Tank sizes of 5,000-6,000 litres are not uncommon, and 8,000-12,000 litres are game changers. On those specs alone, they qualify.

The first thing people notice about European sprayers is their more compact design. In order to comply with the three-metre maximum transport width allowed by law, everything is narrower. That doesn’t prevent the wheel track from widening in the field, of course, where stability is needed or where tramlines need to be matched.

The more compact design does come at a cost. There’s no room for large ladders with handrails to enter the cab and catwalks are usually gone, too. Access to service points can be more cramped. The upside is that most of these sprayers are lighter than their North American counterparts, with weights between 9,000-12,000 kilograms are not uncommon.

More efficient use of space in a European sprayer allows a smaller sprayer footprint with equal capacity (Amazone Pantera).

Less space has provided frame innovations. A central channel frame is sometimes featured, creating room for a sophisticated swingarm suspension, or a walking beam. The cabs typically sit in front of the chassis, with a centrally mounted engine. This offers superior visibility, although it does take some getting used to. Overall, the cabs on these more compact sprayers are every bit as spacious and comfortable as North American types, with better rearward views possible due to the narrow chassis.

Monitor systems vary, but due to most sprayers being made by smaller firms, third-party controllers will be more likely. Ag Leader, Topcon, and others can be seen in place of the proprietary systems of the larger manufacturers.

There are no shortcuts with European cabs.

Again, the compact real estate requires unique solutions. The barrel-shaped tank resting on a cradle that we’re used to in North America is replaced by a more complex-shaped tank the needs to utilize every possible available space. Although this is done with steel on many units, molded plastic is once again more common. Access to the tank lid is also more difficult due to the general absence of walking platforms. However, attention is paid to sump design and minimizing the remaining volume, making cleaning easier.

European sprayers have well-engineered booms with better height control and contour-following capabilities than their North American counterparts. Usually triple-fold, they are compact and many offer Norac (Topcon) height sensors. Steel remains the most common material, with aluminum deployed as necessary on outer sections. Wet booms have 25-millimetre outside diameters and, as such, are slightly smaller than North American types. However, flow and pressure drop are measured to ensure a quality distribution.

An aspect where the European sprayers excel is plumbing design. Most have recirculating booms and certain machines offer continuous rinsing. Both designs minimize waste generation and simplify rinsing and cleaning, saving time. More sophisticated tank-level gauge systems that offer cab readouts, better resolution at low volumes and less dependence on having the sprayer resting on a level surface, can also be seen.

Pumps tend to be diaphragm, with only a few brands offering centrifugal types. The reasons are both technical and traditional. On the one hand, diaphragm pumps can run dry, don’t need to be primed and can be located beside the tank, for example, and can push air into a boom. By contrast, they are bulkier, more expensive, noisier, need a pulsation damper and require maintenance. Some manufacturers, notably the Fendt Challenger and the Chafer, ship with centrifugal pumps. These are now equipped with wet seals and the Challenger has employed an auto-prime system that prevents air-locks.

Whereas all North American manufacturers offer a pulse-width-modulation (PWM) option which now comprises an estimated 30 per cent of new sales, the European sprayers are only beginning to consider this flow management approach. The majority still offer multiple nozzle bodies that permit automatic switching between various sized nozzles to achieve extended travel speed ranges or changes in spray quality. One of the reasons for the delayed adoption of PWM is the European regulatory system, which has yet to approve some aspects of the PWM system. Low-drift performance, for which most air-induction nozzles have been approved, must still be validated for nozzles that must be used with PWM (recall that air-induced nozzles are not generally recommended for PWM).

Many U.K. sprayers also use an interesting means of managing bypass, via a so-called Ramsay Valve. This type of valve uses an air-filled diaphragm to divert flow, and air-pressure change is used to alter the bypass. Such a system was an answer to early butterfly valves which had slow, uneven response, but is bulkier than the modern mechanical bypass valves now available and may require maintenance.

Like North American sprayers, wheels are driven by hydraulic motors. Hybrid Continuously Variable Transmission (CVT) systems are also available, and these offer superior torque characteristics at slower speeds. Engines are like those offered in North America, supplied by major manufacturers such as John Deere, Deutz and Fiat. We are seeing smaller engines on European sprayers owing to the slower travel speeds. Slower speeds don’t just save cost, weight, and fuel consumption, they also provide the advantage of better boom height control and lower spray drift, if productivity can be maintained.

European sprayers generally use the same wheel sizes as North America, with 116.8-centimetre wheels being common. A unique feature of U.K. sprayers is their use of 71- to 96.5-centimetre wheels. Although native ground clearance is sacrificed, it is enough for most crops except for corn, for which many sprayers require a lift kit anyway. These smaller wheels allow booms and other components to be cradled lower, improving the centre of gravity and safety.

Wheel sizes vary, but are sometimes significantly smaller, particularly in the U.K.

There is very active competition between European sprayer brands Many dozens of manufacturers compete for the market, and customers have high expectations. Although some of the features on European sprayers will appear strange at first sight, they should be evaluated purely on performance criteria, not esthetics. Does the sprayer improve efficiency by reducing downtime? Does it make drift control easier? Does it waste less product that one would otherwise dump on the ground? Is it more fuel efficient? In this regard, customers will benefit from the competition introduced by other sprayer brands. A rising tide lifts all boats.