Home Vertical Tillage Up and down 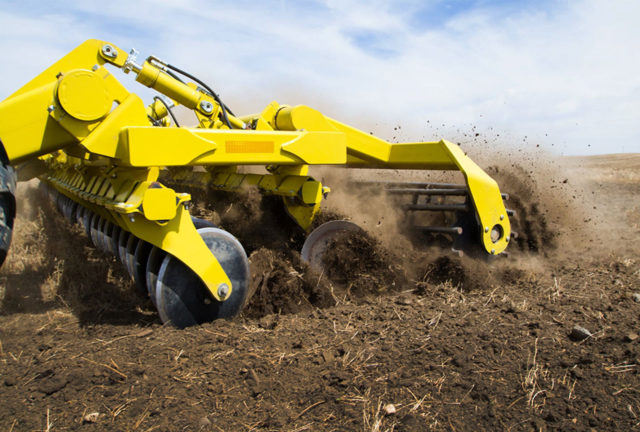 Some farming practices appear easily definable, until you try to define them. Such is the case with vertical tillage, a concept that, like beauty or success, means different things to different people. But for those who stand to benefit from such a practice, getting to the root of it may be well worth the effort.

“Vertical tillage is a term that has lost some of its meaning over the years,” said Kris Wright, product manager with Salford Group. “True vertical tillage is any implement that runs vertically through the ground with no horizontal access. There is vertical movement in both directions of water, air and nutrients down into the soil and also up toward the roots. True vertical tillage helps create micro-fractures without destroying the soil structure, keeping the soil in a state that prevents erosion, promotes water and nutrient uptake and does minimal harm to organic matter in the soil.”

Part of the confusion around vertical tillage may stem from its newcomer status in many areas.

“In Western Canada, we have been a ‘no-till’ region since the late 1990s,” says Glenn Herperger, territory manager for western Saskatchewan and southern Alberta for Salford Group. “Tillage of any form has only appeared in the last five years and has been a real game changer, altering the way farmers view seed bed preparation and soil and residue management.”

Even agronomists have a hard time nailing down the concept, though there are some basic elements they can agree on.

“There is definitely some inconsistency in that various companies list their equipment as ‘vertical tillage machines,’” says Thom Weir, senior precision agronomist with Farmers Edge. “Essentially, though, vertical tillage can be described as a low impact form of tillage that breaks through residue faster and is also used for seed bed preparation. It usually consists of a tool of some sort that penetrates the soil about four inches deep, followed by basket incorporators that pulverize and turn the soil. It’s generally marketed as providing good trash management without excessive tillage.”

While “low impact” is an oft-cited selling point for vertical tillage, it’s also a relative term.

“I just spent a couple of days in Iowa, and relative to what they are doing there, vertical tillage is low impact,” says Weir. “But compared to what we’re used to in Western Canada, it’s actually a pretty aggressive tillage system. It rapidly chops up the residue and flips it, leaving the field with very low surface residue of less than 30 per cent.”

As with much technology, the case could be made that vertical tillage is not inherently good or bad; rather, its merit depends on how and why it’s being used.

“You have to look at what these machines are doing positively and negatively to the soil,” says Weir. “Talking to growers in eastern Saskatchewan and western Manitoba, excessive moisture has been a real issue in these areas since 2011, so the concept of using vertical tillage to dry out the soil has worked really well.”

At the same time, “too much of a good thing” can present problems if farmers forget that they still need moisture to get the crop off.

“Sure, vertical tillage creates a great looking seedbed to plant your canola, but if you lose too much moisture, you won’t be able to get that canola started,” says Weir. “Still, there are potential benefits. I was involved in a study a few years ago where we seeded directly into long-term no-till fields, and when we then tilled the soil, we liberated about 50 pounds of extra nitrogen. While that’s exciting for producers, we have to do more research to determine how much damage was done by tilling a previously untilled field. How many years will it take to build that organic reserve back up?”

Many companies today are marketing vertical tillage as “strategic tillage,” and though it’s a sound strategy for some, it’s important to consider the big picture.

“With the conditions this spring in much of Western Canada, vertical tillage certainly has its place,” says Weir. “In other areas, however, I get a shiver up my back when I see people out with this equipment. I grew up in western Saskatchewan where lack of moisture is always your number 1 enemy, and I lived through the droughts of 1988/89 and 2001/02. Today, we have a whole generation of new farmers who may not have been exposed to extreme drought conditions, so the experience of those who went before them should be seriously considered when choosing a strategy going forward.”

Depending on your tool of choice for vertical tillage, however, moisture may not be an issue.

“Salford vertical tillage tools are designed to manage soil density and residue coverage, and the tools come in two main forms: rolling tines and rolling wavy coulters,” says Wright. “By fracturing the soil and sizing residue with tines or spring loaded coulters, the soil’s air and moisture storage capacity is increased, and more oxygen helps warm the soil and promote microbial life. The residue management function of Salford vertical tillage tools leaves 50 to 75 per cent residue coverage after one pass.”

As an added benefit, Wright explains that the slightly darker soil surface helps evaporate excess soil moisture on the surface. The fractured soil also has increased capillary action, allowing excess soil moisture to percolate down into the soil where the roots can reach it.

“Many producers using Salford rolling coulter vertical tillage tools report reclaiming ground from sloughs in their fields and increasing the acreage they farm due to the improved soil moisture storage capacity,” says Wright.

In addition to providing cautionary tales around vertical tillage, Saskatchewan is also a source of research that may help inform farmers’ decisions. One such study is the vertical tillage research conducted at the University of Saskatchewan from 2016-18 by Drs. Bing Si, Jeff Schoenau and Tom King, and MSc student Raul Avila. Using field scale equipment at a site in south-central Saskatchewan, researchers worked with flax stubble, which is a stubble type where residue management can be a pressing issue. They compared vertical tillage, conventional tandem disc, raking and burning and a “no-till” approach as replicated treatments applied on a flax stubble field in the fall of 2015.

“In the first year after treatments were imposed, vertical tillage of the flax stubble appeared to reduce air permeability, while tandem discing increased it,” says Schoenau, professor of soil science and at the University of Saskatchewan.

“Tillage in general also resulted in reduced aggregate stability compared to no-till in 2016,” says Schoenau. “However, these effects had largely disappeared by the second year. Tillage reduced density and strength at the soil surface, particularly the tandem disc treatment due to the greater working depth. The effect of tillage on reducing soil strength was still apparent in 2017. There were no differences in water infiltration (hydraulic conductivity) observed among stubble tillage and burning treatments in either year.”

Reflecting relatively limited impact of the treatments on soil properties, yields were similar at the site in both 2016 and 2017, with no significant difference among treatments. Because of costs incurred from tillage and raking/burning operations without associated yield benefit, these operations were calculated to produce negative economic return.

One alternative to vertical tillage that may offer better returns in certain instances is a high-speed disc product that is touted as a more advanced residue management tool.

“We consider the Pro-Till® product line that we began marketing in 2013 to be the fastest and most versatile piece of tillage equipment you will ever own,” says Sheldon Mohr, sales/marketing manager for Degelman Industries in Regina, Sask. “It’s designed to shred heavy fall residue, open up spring fields, level ruts, destroy clods and produce a near perfect seed bed.”

According to Mohr, the Pro-Till® shreds residue at speeds of over 16 km/h while ensuring uniform distribution of residue, which is critical for no-till rotations.

“Problems such as poor residue distribution, uneven emergence, delayed emergence, erosion and seeder/planter plugging are reduced with the Pro-Till®. Our combination of independent disc arms, small diameter shallow discs, motion dampening rubber suspension, sturdy frame and cutting edge consolidating rollers allow this tillage tool to slice through residue in a way that has never been seen before. The Pro-Till® will cut, weed, throw and mix soils at incredible speeds, and usually with one pass. This is a true residue-killing machine,” he says.

Advances in technology are also being made with classic vertical tillage, but it’s a slow process.

“Producers don’t mind devoting input costs to things they can directly link to increased yield like irrigation and fertilizer,” says Wright. “Tillage is more of an indirect benefit and a long-term gain rather than an instant reward. For that reason, developments in vertical tillage technology are kind of the last frontier. Even so, a number of manufacturers who may not have had anything to do with tillage in the past are now adding to their core product lines and dabbling in things like automated depth control and remote control of particular implements. It may just be a while before significant advances in vertical tillage join the mainstream.”

In the meantime, though, Wright says that farmers who have been using vertical tillage for two to three years are already seeing better nutrient uptake and residue management. By anyone’s definition, that’s progress worth pursuing.