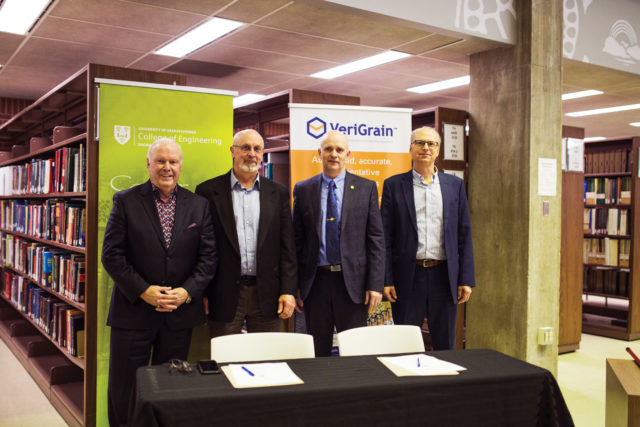 Grain sampling at harvest. The time-consuming practice yields poor representation and inaccurate results more often than not, but that’s about to change. As early as harvest 2020, farmers and the agri-food industry will begin to reap the benefits of the most accurate sampling right off the auger.

Ken Jackson, VeriGrain CEO and chair, and Grant Devine, VeriGrain VP of strategic development, say their sample acquisition management system is the “easy button.” It takes tedious sampling off the farmer’s plate with automized, accurate and representative grain sampling controlled via smartphone. Sample data is then digitized, and as the technology develops, soon to be available in real time as grain travels from farm to processor to consumer.

“From a user perspective, we’re taking the ‘Apple’ approach, which is, you open the box, hit the button and away you go,” says Jackson.

VeriGrain addresses a number of challenges within grain sampling, including accuracy. “A scoop on a stick to represent 100,000 bushels just cannot work,” says Devine.

With VeriGrain’s extractor placed at the outlet of an auger, conveyor or grain stream in the handling system, grain is extracted and travels through a vacuum-based transfer system to the cross-cut sampling unit. Sample rates are programmed and controlled by the user.

“Get your smartphone out with the app loaded onto it. Select the sampling rate or use the sample management system by scanning the bar code on the container, and associate all the sample information,” says Jackson. “We created an audit trail where we monitor all the dates, times, functions, what bin it went into, all of that. When the grower goes looking for the sample from any bin or truck they empty, they know it’s representative.”

Each sample is then split into six identical tubes that are sealed and barcoded. These digital twins of what’s in the bin or truck load can be sent to the elevator, Canadian Grain Commission and analytics lab where that first cut provides a sample to be analyzed anywhere with spectrometer analysis.

The benefits of early accurate sampling start on the farm, move throughout the entire food chain and finish at the bank. The return on investment can be substantial. Knowing exactly what’s in the bin, farmers can negotiate optimal pricing on their products.

“Over 70 per cent of grain sold off the farm is under-valued because it hasn’t been accurately sampled,” says Devine. “When guessing at grade, the product is discounted many times over and the farmer loses money.”

Farmers will now determine early whether a product will draw a better price based upon grade versus protein levels. “A level two or three grade can still have good protein levels and be worth more based on protein than the grade,” says Jackson. “It requires accurate and representative sampling to really make the most of playing that game.”

Realizing premium pricing on even 10-to-20 per cent of a crop is a big bump for the farm’s top line. “A grower could quadruple their net profit, or more. They’ve already paid the price, invested everything into inputs, and now what’s in the bin is in the bin. Every extra dollar they can get there is pure profit.”

VeriGrain also answers the time issues of sampling. For one, sampling at harvest is hardly convenient for the operator. “We’ve solved this by fully automating the process. When the sample containers are loaded into our machine and the power’s on, everything takes care of itself,” says Jackson.

Second, as time elapses, inaccurate or poorly representative grain samples can decrease profits on famers’ hard-earned investments as downgrading and discounting occur down the line.

“The 2019 harvest is a perfect example of this,” says Devine. “There’s every kind of quality and grain left on the ground. Eventually over a year-and-a-half or two, as farmers begin to market their grain, they’ll know what they have.”

Accurate initial sampling can increase the grain’s grade or protein value, a major financial boost. Devine recalls a farmer with winter wheat originally graded as feed quality. “Analyzed more carefully, it showed high protein and the farmer sold it to a miller in Montana, picking up No. 1 price for an extra $500,000,” he says. “This is the advantage of knowing what you have immediately.”

On the larger scale of today’s agri-food industry, mistakes are costly while knowledge is power. “Inaccurate information at harvest pervades into the whole system and it costs literally billions of dollars,” says Devine.

Whether a shipload of barley to Japan contains portions of unideal product, the wrong feed ration goes into cattle or unfit durum is used in pasta making, recalls and mistakes are extremely expensive.

“VeriGrain fixes this right at the start, but it has implications right around the world to whomever is making food with Canadian grains, oilseeds and legumes,” says Devine. “This technology will help the farmer, but it’s so important that it helps everyone else in the food chain avoid mistakes by depending on that accuracy.”

Connection is the Key

In today’s digital world, VeriGrain will bridge the current analog gap between producer and processor. “Digitizing all the information around what’s in the bin, there’s now the ability to readily access the information. It’s all in the cloud, blockchain-secured, very sharable and augmentable,” says Jackson.

These benefits trickle down the food chain, where proven accuracy instills the trust and transparency consumers are demanding. “As others tap into that information it makes their lives easier because they’re obligated into traceability, transparency and trust within the food system,” says Devine. “Everybody making malt, pasta, or feeding dairy cows, they need to know what they’re buying.”

Aggregated information also brings a competitive edge. “As more farmers share accurate data, they get to know the quality of the crop in their whole region, or the entire country,” says Devine. “If they have something better, or there’s a shortage of something they have, they can demand a premium.”