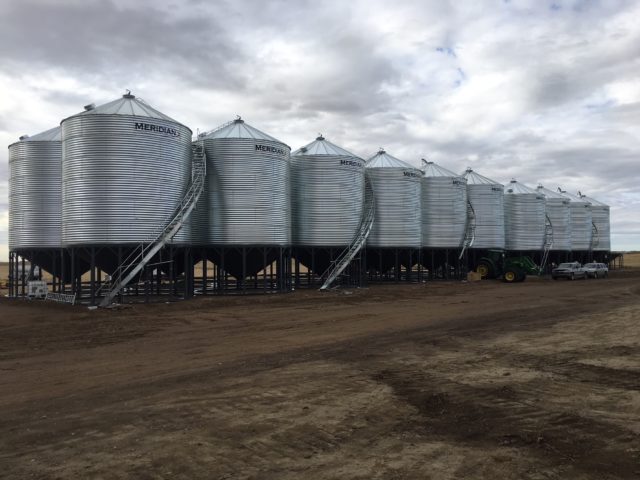 Canadian farmers have always stored a portion of their crop on-farm, knowing they gain better marketing control and more competitive pricing if they can hold inventory into the new year.

Now that temperature and moisture sensors mean spoilage is mostly a thing of the past, it’s increasingly attractive and easy, given wireless alerts, to manage significant storage capacity on-farm. With improvements in genetics leading to huge per-acre production gains and industry consolidation significantly growing average farm sizes, it’s not unusual to find farmers with hundreds of thousands of bushel storage capacity.

“What’s happening is that we’ve got a younger generation of farmers looking to buy up land and run it at maximum efficiency,” says Ken Pierson, a sales manager with Meridian Manufacturing. “Meanwhile, the amount of grain we’re growing has exponentially grown. In 2010 in Saskatchewan, for example, we were growing wheat at 25-30 bushels per acre. Now it’s not uncommon to be at 50-70 bushels per acre. It used to take 30 minutes to unload a five-tonne truck. Now guys have four or five combines going and semis that are getting unloaded by large augers in 12-17 minutes. That’s what’s driving the big bin business. I expect [continued building of big bins] to keep happening for the next five to 10 years for sure.”

Trevor Crozier and Jake Leguee are two of that younger generation. Crozier, a partner in Crozier Ag in Sedley, Sask., says his operation started with zero storage in 2008. Over the past decade, he has installed in excess of 700,000 bushels of capacity at a single yard site: four 62,500-bushel bins, 10 32,000-bushel bins, plus eight fertilizer bins that are cleaned and used annually for crop storage, too.

“The trend is everyone wants more storage,” he says. “More often than not, there’s a premium for holding onto a crop longer that outweighs the cost of carry. That means the return on investment, even for a big investment, can happen really quickly.”

The recent issue with China’s refusal to take Canadian canola is a case in point, according to Pierson. “If you’ve got canola in storage on-farm with aeration on it and good monitoring, you don’t have to feel pressured to sell it for $9 per bushel. You can hold onto it for three or four months, or however long it takes to get this thing settled.”

In addition to not having to take the lower prices that come when one sells off the combine, Crozier says he really appreciates the flexibility his bin yard allows, both for keeping crops separate and for blending. As well, he values the simplification of logistics post-harvest.

“We have long and tiring winters. On a farm of our size, we were spread out over 20 miles, so constantly driving tractors in winter. Now, shipping is just so much easier. We can haul on any given day.”

Though they still use a little bit of bagging, that portion of the crop is sold before winter, meaning snow removal only needs to happen in the main yard site and all unloading equipment is easily accessible.

“Bags are great at filling in the gap between a record crop and a poor one. Permanent storage is definitely better. We have the continual plan to keep adding to our bin yard. Basically, every five years we’ll build another pair of big bins,” he says.

Big storage capacity usually means big bin sizes, which is a good thing both for construction cost efficiency and operational efficiency. Setting up an auger in one place and filling longer means faster unloading, which keeps combines moving in the fields.

“It’s not acceptable for combines to stop. They’re worth too much money. We have to do anything we can to keep them going,” says Leguee.

And, a big bin’s efficiency isn’t only at loading, he points out: “When you unload and go to clean that bin, the floor size is the same whether it’s seven rings or 10.”

Given the semi or semi-and-a-half of grain left in the bottom of a big flat-bottomed bin at unloading, perhaps it’s not surprising that an increasing number of efficiency-minded farmers are coming to manufacturers in search of large hopper combos, says Pierson.

“If I had said seven or 10 years ago that people would buy 10,000-13,000 hopper combos, people would have said I was crazy. But, when you become a large farm and you’re planning for the next decade or two, and you want to reduce manpower at harvest, all of a sudden a 24- to 27-foot hopper combo becomes very attractive.”

Currently over 40 per cent of all grain bins sold by CORR Grain Systems Inc., the No. 1 supplier of large grain bins in Western Canada, are leased rather than sold.

“Customers prefer to utilize the expense of leasing a bin over depreciating the asset over a longer time,” says Brett Schmidt, CORR Grain Systems’ vice-president of finance. “Leased or sold, storage bins are a great return on investment as they hold their value, and optimize the storage and maintenance of the crop production at the farm gate.”

Both Leguee and Crozier use wireless grain-monitoring systems. Though cable monitoring the older, manual way is certainly doable, “the problem is making sure it gets done; knowing who the last guy was to do it,” says Crozier. As such, the automatic alerts that ring right through to one’s phone is a “very, very cheap safety net,” that he highly recommends.

Neither uses remote fan control, though Leguee sees potential in that technology.

“Our home bin yard is pretty close so it’s easy enough to go turn the fans on. But, I do think there’s a fit for automatic fan control. It can be hard to know exactly when to run fans. A system that would take weather into account would be beneficial. I see it in our future, especially at our home bin yard.”

“Grain bins are permanent; you get to live with them forever,” says Crozier. “It’s a huge investment and you only get one chance to do it, so think through doing it right. Building for today is easy, anyone can do that. You need to really look past the next five or 10 years.”

As such, consider key priorities such as yard drainage, vehicle access and snow clearing both in the immediate future and if you were to expand capacity yet again.

On rented land, consider what happens if the rental agreement ends: whereas hopper bins can be put on a trailer and moved, big buildings may prove an investment lost. On owned land, build big and preferably modular or stackable to maximize efficient expansion opportunities.

Before you start, look for good advice, recommends Crozier.

“If you’re thinking about building, go talk to someone with a big yard,” says Crozier. “Ask them what they’d do different if they could do it again. I’ve never spoken to any of my peers who said they 100 per cent nailed it. People are happy to share. We all want to see our friends and neighbours succeed.”