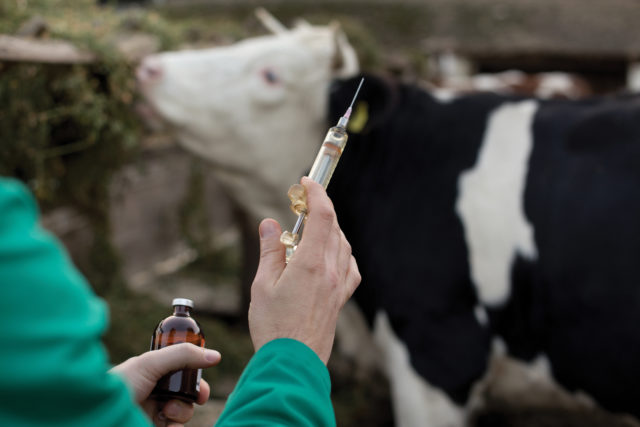 By Dec. 1, 2018, cattle producers will no longer be able to go into a farm store and purchase antimicrobials or antibiotics. Instead, they will need a prescription from a veterinarian with whom they’ve established a veterinarian/client relationship.

“I’m hoping that through Canadian Cattlemen’s Association and all the different provincial associations that producers are becoming more aware of the change,” says Murray Jelinski, professor in beef cattle herd health at the University of Saskatchewan. “Certainly there has been a lot of awareness generated in the veterinary communities between the Canadian Veterinary Medical Association and all the provincial associations.”

All antimicrobials in Categories 1, 2 and 3 will require a prescription from a veterinarian. Category 1 drugs have high importance in human health. Jelinski, who teaches students in the Western College of Veterinary Medicine, cautions there is more emphasis on this than ever before as it is a global issue that affects human health. Countries around the world are moving to more regulation of pharmaceuticals.

“Everybody is extremely concerned about antimicrobial resistance,” he says. “This is an ongoing thing and Canada is just following suit and doing its part along with all the other countries in the world. Everybody has to have a more prudent use of antimicrobials or better stewardship – whatever phrase you want to use around that.”

Data released from the World Health Organization has revealed that many thousands of people die every year because they have an infection that can’t be treated.

“It’s a serious issue – if you think about going into a hospital and being sick with something and none of the drugs work,” says Karin Schmid, beef production specialist with Alberta Beef Producers. “It’s scary and this demonstrates that we’re willing to do our part to mitigate that resistance development. It also helps anyone treating cattle. That same principle applies. We’ve got some sick cattle and the drugs that we’re giving them aren’t working. That’s money down the drain and that’s an animal welfare issue.”

Schmid says the revision is a policy change from Health Canada.

“The concern from the human health side is that antimicrobials used in livestock production are contributing to bacteria that develop resistance that could eventually impact human health. The research on the beef side is showing that our usage of antibiotics is not really having an impact on human health to that point. But it is important to stress that we need these products to remain effective, both for people and for cattle,” she says.

Implementing veterinary oversight and having prescriptions in place is one way to help ensure these products will continue to work.

“In human medicine, we require prescriptions to buy antibiotics from a pharmacy and it’s just putting the same control with our veterinarians,” she explains.

Schmid doesn’t believe there is a high number of producers misusing antibiotics in the beef industry. However, veterinary oversight will provide an extra level of security and confidence to the consumer.

While most producers have a veterinarian they use regularly, there are some who do not.

“There will be some producers, who over the years, have never really used a veterinarian for whatever reason,” says Jelinski. These producers will no longer be able to go into a feed store and buy tetracycline or penicillin and won’t be able to get it from a veterinarian without a patient/client relationship. Having that relationship and that familiarity with each other is crucial for access to antimicrobials.

“It’s a regulatory requirement for veterinarians. It puts them in jeopardy of becoming a wholesaler of drugs if they haven’t established that relationship. Producers are going to have to start using veterinarians if they want to start using antimicrobials,” adds Jelinski.

Schmid notes that a lot of drugs already require prescriptions. “The product that this affects are things like penicillin, tetracycline and sulfa drugs that you used to be able to just walk into a UFA farm store and get.” Now producers will need a prescription for those products and will likely need to go to a veterinary clinic or pharmacy to pick things up. The regulations will vary from province to province.

“I think by and large, there’s support for the prescriptions. I think producers see it as doing their part to show that we are in fact using antimicrobials responsibly and we are good stewards of these products that we need to be effective for human and animal health,” she says.

Jelinski feels some producers may grumble about it, but in a year or two, it will be the norm. “I don’t think the downside is that big. But the upside potential, it just makes sense that we all have to buy into this to use antimicrobials in a more prudent manner. This makes sense to people. You can’t just walk in and get a bottle of tetracycline because we still use tetracycline in humans as well.”

Regulations around pharmaceuticals have been increasing for many years.

“It’s important to appreciate what the government is doing and … the government has always had a list of prescription drugs and a list of over-the-counter drugs. All they’ve done is add the over-the-counter ones to the prescription list. It’s not like it’s a major regulation change. We already had the regulations in place in prescribing,” says Jelinski.

But producers in Alberta are concerned about timely access to the medications and affordability, says Schmid. “If distribution channels are restricted only to veterinary clinics and pharmacies, they have concerns about accessing some of the products that they used to be able to get at farm supply stores.”

Lyndon Mansell is one of those producers. Mansell, who raises about 1,500 cattle around Innisfree, is a little worried that he won’t be able to keep antimicrobials around in case of an emergency. He has a longtime relationship with his veterinarian and only uses antimicrobials when necessary. Unlike some producers, he doesn’t dose his cattle with antimicrobials when he’s moving or weaning them.

“Some people use them as a precaution rather than to deal with the problem, which I don’t agree with. We treat symptoms; we’re very strict,” he says, adding that dosing with antimicrobials is also costly and the efficacy of the drug can be lost if they’re overused.

Having to get a prescription from a veterinarian forces a producer to do due diligence, but it is also going to cause some inconvenience.

“You have to have a professional relationship with a veterinarian before they can prescribe anything. Producers won’t have access to drugs they don’t need so they won’t be able to keep them,” he says. Before this mandate, Mansell used to be able to pick up the antimicrobials he needed at the feed store or he kept them in his fridge. Now he won’t be able to do that.

Fortunately, he’s had a relationship with his veterinarian for more than 30 years.

“With some vets, it’s totally different. In Vermilion, it’s an ongoing relationship; it’s not like they have to come and meet your cows.” Sometimes, he has to take a sick animal in, and in some cases, the vet comes out to his place.

“It will force even the smallest producer to still have their relationship with these vets to get anything going.”

This may be challenging for producers who live far away from their veterinarians. Many large animal clinics are located farther and farther apart, which could present a challenge during calving.

“It’s a challenge because you want that relationship already in place. You don’t want to be whipping in there to get a calf pulled at midnight,” he says.