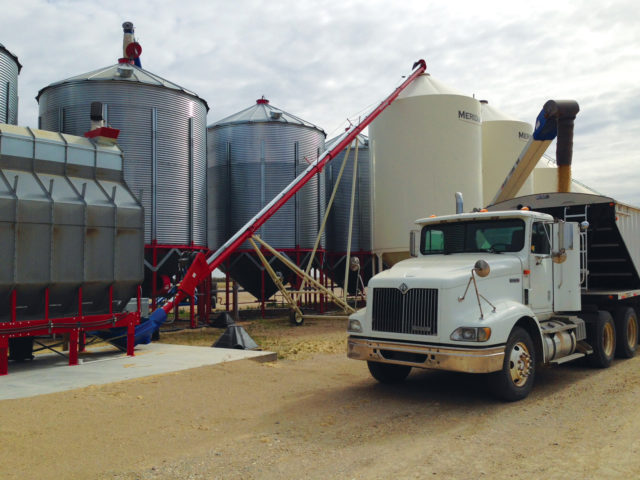 Grain dryers are becoming increasingly useful in Prairie farming and more farmers are snapping them up. Scott Keller, who farms in New Norway, AB., is a huge fan of his grain dryer, and has been farming with one for years.

“We’ve had the same dryer since 1995 and we’ve slowly expanded the system, adding more bins. It’s somewhat automated in that it shuts off automatically if there’s a problem, but you still have to speed it up and slow it down,” he says. “When I figure out our natural gas power to augur the grain, dry it and then cool it off, we’re basically at a penny a point per bushel. If we’re drying three points of moisture out of it, it might cost three cents a bushel, is all. You have the money tied up in the infrastructure. It’s relatively cheap, where aeration can remain quite slow and ineffective, at least in our climate.”

“We basically dried over 90 per cent of the grain we combined. We were able to finish, as well. The grain dryer was quite likely the difference between having grain left out in the field over winter those years or getting it in the bin before winter set in permanently for the year,” he says.

Keller’s bin is square shaped and holds 700 bushels. He and his team dry the grain right off the field by filling a 4,000-bushel wet bin as they go. The dryer draws grain out of it automatically if it needs it.

“You set the heat and how fast you want it to run through. We have our own moisture tester on-farm so we’re testing all the grain coming off the field that’s going into the wet bin, so we know what to expect,” he explains.

The moisture levels change during the day, so Keller makes manual adjustments to the dryer to speed it up or slow it down, so it continues to dry the grain properly. The combine typically runs faster than the grain dryer can handle, and the dryer itself does between 400 to 500 bushels an hour.

“By the end of the day, by the time you quit combining in the evening, usually you’ve got the wet bin full and maybe a semi [truck] full as well that you’ll unload later in the evening. If we start combining at lunch time, the dryer is usually running by 3 PM, by the time we have a truckload there. Then you’ll dry grain until 4 or 5 in the morning, so that involves checking it every two to three hours once you quit combining for the day. It ends up being a little tiresome, but I guess it’s a little better than just waiting.”

Keller says it’s very difficult to achieve the moisture content requested by maltsters if you just let your grain dry in the field. Maltsters want the grain between 13.5 to 14.5 maximum moisture content.

“The only time I’ve seen grain actually dry off is when we get those fall days when it’s just bloody hot—like 30° Celsius. And then the grain still needs to be cooled off anyways, because it spoils in the bin if it goes in the bin too hot. If your temperature is 30°, then the grain is usually five to 10 degrees higher. Thirty-five degrees Celsius barley will cook and wreck the germ in the bin if it doesn’t get air blowing through it. It ends up being really labour intensive.”

Keller says that he ends up combining at a steady pace because of the dryer. He’s also able to get into the fields when things might still be a little wet, unlike his neighbours who wait for everything to dry down.

“If you’re waiting for grain to be close to dry, you might not combine for three, four or five days and then, boom; conditions will be right and then you’ll run all day and night and then it will rain again,” he says.

Having the dryer enables him to keep his barley at a higher grade. Rain could mean stains, chits, or even sprouting, depending on how much rain falls.

Keller says that he can dry peas and faba beans, but it doesn’t work as well because they are harder to auger. He mostly sticks to wheat, barley and canola.

“We dry virtually every bushel of wheat and barley that we would grow, and we dry quite a bit of canola now. We’ve switched over so everything we do is straight cut; straight canola can get dry standing, but we’re typically combining it when it’s between 10 to 12 per cent moisture, and 10 is dry.”

Mark Cutts, a provincial crop specialist with Alberta Agriculture and Forestry, says grain dryers work well if harvest conditions are poor, farmers need to get the grain off, and the grain isn’t at a moisture level that is considered safe for storage.

The use of grain dryers really varies per region. In the Peace region of Alberta, dryers are used because their falls are pretty rough, points out Cutts. In southern Alberta, producers are able to dry their grain without dryers due to the strong winds. In Central Alberta, it’s a free for all, where some farmers use dryers and others don’t.

“It’s a matter of what kind of falls you have. There are some years where I think everyone would like to have a grain dryer. It’s a decision made by the producer. Maybe they don’t feel it’s needed enough to justify it. Lots of thought goes into whether they do or don’t need one,” says Cutts.

“It’s a valuable tool when it’s needed. When producers don’t have grain dryers, hopefully they have a neighbour or someone who would be willing to help them out when they end up with tough grain,” he says.

When there are nasty fall seasons, the interest in grain dryers spikes.

Rob Stone, a grain grower from Davidson, SK, bought his dryer a few years ago in a pinch.

“It was a last-minute panic purchase in 2014, to bail us out of a bunch of wet grain that we’d already put into bags,” he says.

Stone and his family were faced with wet feed wheat and malt barley at the time. Since then, they typically use the dryer on their malt barley, taking the moisture content down from 16 to 13 per cent.

“It’s really tough to get it to the dry spec. The majority of drying done is malt barley,” he says.

If the crop doesn’t dry in the field, Stone and his crew can start combining their malt barley several days earlier to make sure they can get the quality off.

“Once it’s in the yard, you’ve got all sorts of options,” he says. If the crop doesn’t dry, it’s easier to fix mistakes with a dryer. “Natural aeration doesn’t dry a lot of things. We’ve had moderate to low success of actually drying things with natural air. It just gives us flexibility on the farm to be more on top of things.”

Stone hasn’t used his dryer on canola, but many people in his area have. In 2016, he was able to get everything off before the snow came.

“It probably made it so we didn’t have to worry about the snow. We were able to get going on our stuff earlier on and were able to dodge some of the earlier conditions in our cereals and deal with it in October and September instead of October and November,” he says.

There aren’t a lot of dryer services in Stone’s area; the closest ones are about two to three hours away. He has a smaller dryer that allows him to do about 300 bushels an hour. It’s definitely paid for itself by now.

“In terms of getting into it and having a dryer around the yard, I think it’s been an absolutely wonderful investment,” said Stone.