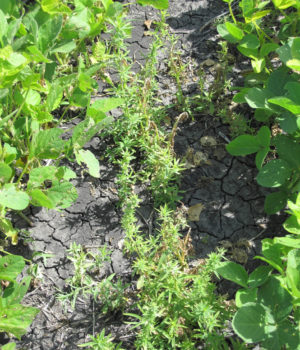 It’s said that you shouldn’t discuss religion or politics with your neighbours. Drainage either. My own take, based on experience and social media, is that row spacing could be added to that list. It seems like many farmers have strong opinions on the “right” row spacing, which ranges from six to 36 inches and anywhere in between.

Against my own better judgment, I’m about to jump into the fray.

In general, studies have shown that, compared to narrower rows (less than 15”), wider row spacings lengthen the period of time that weeds must be controlled to prevent crop yield loss. In Manitoba, for example, soybeans planted on 30-inch rows required weeds to be controlled for two additional soybean development stages, on average, compared to soybeans seeded on 7.5-inch spacing (Figure 1). The common-sense theory here is that crops grown on wider rows take longer to canopy, giving weeds the opportunity to compete for sunlight, nutrients and moisture. One caveat to such studies is that they have mostly been conducted on traditional row crops, such as corn, dry beans and soybean, with little data available for crops like canola (e.g. Morrison et al, 1990) and cereals (e.g. Lafond, 1994).

That said, higher plant populations combined with narrower rows is a proven strategy to increase crop competitiveness with weeds across a range of crops. Agriculture and Agri-Food Canada researchers in Alberta and Saskatchewan conducted extensive studies in cereals and canola which has shown this to be the case. Seeding rate was also found to be an important factor, as part of an integrated approach, for increasing the competitiveness of flax with weeds, including wild oat (University of Saskatchewan). In nearly all the studies reviewed, increased plant populations decreased weed biomass, highlighting the ability of denser crop stands in suppressing weeds.

Not yet sold on narrow rows? As a bonus, there is a strong correlation between plant population and yield. The put-more-seed-get-more-yield scenario has been demonstrated in canola and cereals, in addition to row crops like dry beans and soybean; however, corn tends to have mixed results.

The other bias: in contrast, plant pathologists advocate for wider rows and/or lower plant populations.

The theory here is that such crop arrangements can reduce the incidence of disease within a field by increasing airflow and decreasing humidity within the canopy. Research conducted at the University of Manitoba (U of M) concurs, finding higher incidence of sclerotinia canola seeding rates increased. Despite higher yields, this trend was also consistent in soybeans (North Dakota State University) and dry beans (NDSU, U of M), often necessitating the use of a fungicide in narrow row, higher plant population scenarios. In addition to affecting canopy microclimate, researchers found denser crop stands also contribute to disease through increased plant-to-plant contact and due to greater risk of lodging.

What about the lower yields associated with these systems? Planter enthusiasts will quickly, and correctly, point out that higher yields don’t automatically maximize return on investment, especially when seed is a significant input cost. It’s not all economics either; we’ve learned plants can alter their growth habits based on available space, likely perceived by reflected light “signals” from neighbouring weeds or crop. Corn is perhaps the biggest crop diva, narrowing its leaf arrangement, producing smaller ears or aborting ears when it feels claustrophobic. Canola, cereals and soybean also compensate by branching/tillering and/or self-thinning in response to varying stand density. This suggests there is an agronomically optimal plant density that minimizes self-thinning and maximizes crop uniformity.

So, I’ve successfully argued for both drills and planters. I’ll further appease my neighbours along the row width spectrum by saying the “correct” spacing is likely different for every farm, depending on equipment, economics and agronomics.

The fact is, whatever your row spacing, it will have an impact on a weed management plan. Crops grown on narrow rows (less than 15”) may be relatively weed-free with a herbicide burn-off treatment followed by a single in-crop herbicide application. To achieve similar results, crops grown on wider rows (more than 15”) will likely require the use of residual herbicide chemistries and/or multiple in-crop herbicide applications, or tillage.

Regardless of row spacing, every farmer should think about resistance management. However, row crops are arguably at higher risk for the development of herbicide resistance because of greater herbicide use intensity coupled with a competitive weed population. In Manitoba, the first cases of glyphosate-resistant (GR) kochia were found in corn and soybean row crops. This differed from Alberta and Saskatchewan, where GR kochia has largely been associated with chem fallow. Weed scientists have pointed out that row crops and chem fallow are more similar – in terms of herbicide use intensity and competitive weed populations – than row crops are to solid seeded crops.

The goal here isn’t to blame a system but to manage it better. Prairie farmers are increasingly being sold on residual, pre-emergent herbicides and on new weed-speak, such as herbicide “layering.” The concept is twofold. Firstly, by pairing residual products with our traditional herbicides, we help extend weed control through a crop’s critical weed-free period. Secondly, layering herbicides – when the activity of a herbicide active ingredient(s) from one application overlaps with the activity of another herbicide active ingredient(s) from the following application – may help reduce the risk of developing herbicide resistance.

Remember to bite your lip when you think your neighbour growing canola on 15-inch rows should switch to 12-inches.