Home Those Wily Weeds The Canary in the Coal Mine 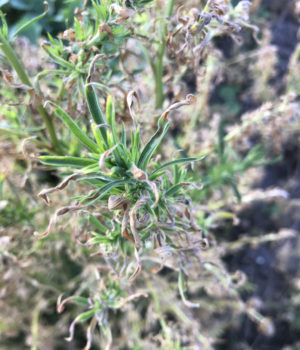 We have a kochia problem and it’s getting worse. You may think that I’m the one with the kochia problem because I bring it up fairly often, but Charles Geddes, a weed ecology scientist with Agriculture and Agri-Food Canada in Lethbridge, has proposed that herbicide resistance may threaten our reduced-tillage crop production systems. He labelled kochia the “canary in the coal mine,” serving as an early warning for upcoming issues.

Kochia is a challenging weed to control. It germinates early when soils reach 3.5 C, but it can also emerge later in the season, so the timing of weed control is tricky. Understanding herbicide labels is extremely important when it comes to selecting an effective herbicide program. The label provides you with recommendations for consistent weed control, but we tend to push the boundaries resulting in less-than-perfect control and potentially speeding up the development of herbicide resistance.

Pre-seed herbicide applications do not rely on weed staging because the herbicide is intended to be applied before the weeds emerge. The challenge with pre-emergent herbicides is they require specific conditions to be effective. Application rates may be impacted by soil characteristics such as organic matter or clay content, and they do not control weeds that have already emerged. There are several pre-seed herbicide products that can help to manage kochia including some Group 3, 14 and 15 products. Ethalfluralin (Edge, Group 3) does require time to activate, and therefore is recommended to be applied 10 days prior to seeding. Sulfentrazone (Authority, Group 14) has residual activity but requires moisture for activation. Flumioxazin (Fierce, Group 14, 15) controls Group 2, 4, and 9 resistant kochia biotypes, but also requires rainfall for activation.

In-crop herbicides (post-emergent application) rely on weed stage, as well as the environment. The labels vary by product, but typically smaller weeds require lower rates for effective kill. The small weeds on most labels are those in the two-to-four leaf stage, which is not when most products are applied. Even at the eight-leaf stage, which is somewhat more typical for herbicide application, kochia is still quite small. Post-emergent herbicides with activity on kochia include Group 4, 6, 10 and 27. Bromoxynil (Group 6) is a contact herbicide recommended to be applied before plants are two inches tall. MCPA, 2,4-D, fluroxypyr and dicamba are some of the Group 4 active ingredients used to control kochia, and at higher application rates shows control on kochia up to four inches tall. The Group 10 herbicide in the arsenal is glufosinate, a contact herbicide for use in select herbicide-tolerant crops. It is most effective on kochia up to three inches tall. Group 27 herbicides (including pyrasulfotole and topramezone) also need to be applied to kochia that is four inches or shotrer.

Kochia management without herbicides relies on tools like crop competition and patch management by mowing or tillage to reduce or prevent seed production. Addressing salinity issues may also decrease the kochia issues in a field. There is unfortunately nothing new or earth-shattering with these suggestions. These techniques are essential to future management as herbicide resistance becomes increasing prevalent.

The state of herbicide resistance in kochia

The scary part of these results is that many of the populations have a low level of resistance. That does not mean that by applying more glyphosate or another herbicide you will overcome the resistance. It means that a proportion of the population is resistant at the normally lethal dose of the herbicide while some of the population will still be controlled by the herbicide application. That means that herbicide tools are not completely useless yet. If we keep using herbicides as we have done for the past five years, I cannot even imagine how much herbicide-resistant kochia will populate Western Canada in another five years. It also means that for now most farmers will not suspect that they have glyphosate resistance and therefore have no idea that now is the time to make changes.

How do we manage?

In theory, kochia seems easy to manage. Most seeds germinate in the year after they were produced, so in a short amount of time, the seedbank could be depleted. Unfortunately, that also means that if kochia was a problem last year, it has more potential to be a problem in the upcoming year. A diverse crop rotation, narrow row spacing and increased plant densities all help to enhance crop competitiveness.

In the spring, there is a need to apply a pre-seed burn-off herbicide that is not glyphosate alone. This allows the crop to emerge ahead of the kochia and again be more competitive. Then, the in-crop herbicide needs to be applied effectively and utilize different modes of action than the pre-seed burn. Finally, all weeds not controlled by the herbicides need to be controlled by another strategy such as mowing, tillage and hand-pulling. Finally, build fences to keep out your neighbour’s weeds. It sounds like I’m making a joke, but herbicide resistance management is a community effort and if you are making changes but your neighbour is not, you may not see all the benefits of your changes.